Elite Cuban free agent Jose Abreu will eventually make it to United States shores, but it may be too early to tell if the Miami Marlins will be suitors for the slugger.

Recently, news broke out that top Cuban player Jose Dariel Abreu has defected from Cuba and is now residing somewhere in Haiti. Abreu was the best hitter on the Cuban national team, and his defection now can only surely mean that he will make his eventual arrival in the free agent scene. Major League Baseball teams will be more than interested in acquiring a player like Abreu now that he has defected, so let the bidding war begin!

One of those teams may or may not be the Miami Marlins, who are always included in the list of teams interested in a Cuban free agent. A few years ago, the Marlins heavily pursued Yoenis Cespedes before he signed a four-year, $36 million deal with the Oakland Athletics. Jim Bowden of ESPN suggests that the Fish would be an early suitor for the slugger, but Joe Frisaro of MLB.com reports that it is still too early to determine the Marlins' interest.

From what I’ve gathered, it is way too early to predict if the Marlins will indeed make a push for Abreu. The team is planning on sticking with Logan Morrison at first base, and Abreu may not be able to handle a corner outfield spot.

Abreu may be more suited to strictly play first base, or he could be an option for an American League club as a first baseman/designated hitter candidate.

More answers on Abreu will come in the ensuing months. Right now, it is way too early to speculate.

This commentary gets to the heart of the Abreu debate for the Marlins. It took the Marlins several years to determine that Logan Morrison was inadequate in left field, and the team would not want to go through another ordeal like that again (certainly the fans would not). Abreu is a flawed defender who is questionable to even handle first base, let alone the outfield. As long as Morrison remains on the Marlins, the Fish would have no realistic spot for Abreu.

But there is a reason for all the hype surrounding Abreu, and that is because his bat may be otherworldly. Steve Sypa of Amazin' Avenue has a profile of Abreu up, and the batting numbers from the Cuban Serie Nacional league are staggering.

Over the last four years, Abreu has hit a ridiculous .407/.557/.805. Former Baseball Prospectus head honcho Clay Davenport still ports Davenport Translations that convert numbers from other leagues to Major League equivalents. In his translation of Abreu's 2011 season (51st Serie Nacional), Davenport's equivalent batting line for Abreu in the majors was listed at .381/.485/.809. That was after translating for the significantly larger difficulty of the majors, as Serie Nacional is suspected to be around the level of Class-A leagues.

All of this is to say that Abreu is a fantastic hitter who will soon be available on the market. If he is a superb hitter like his numbers seem to be suggesting, it is possible he may not have to play well at first base to garner significant value. And with the Marlins always interested in a Cuban player to market to an apathetic fan base, perhaps pursuing Abreu would be a good idea. 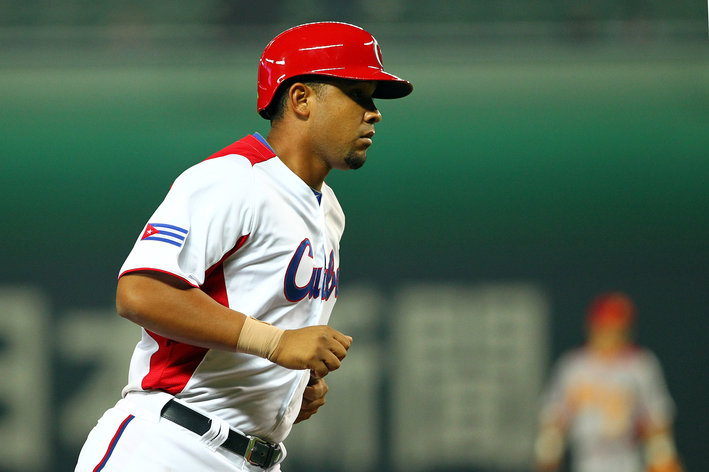 According to multiple credible sources, Cuba's best hitter, Jose Dariel Abreu, has defected from his country. The sensation first baseman would be a great fit for the Mets, as he would be for most teams.

Then again, Miami needs to consider the price of Abreu. Early reports say he is looking for a six-year, $54 million deal from a signing club. That is the same amount of money per year that Cespedes is earning, but with two more years tacked on. That is a hefty price tag for a player with relatively unknown production and known defensive issues. But the allure of a potential superstar is hidden within the 24-year-old's play, and that should definitely be considered as well.

The Marlins should certainly be interested in Abreu, but they should also know ahead of time what they plan on doing with Morrison. Any Abreu signing would force a Morrison trade, so the team should be prepared to perform that function if it is interested in the Cuban slugger. But right now, it is still up in the air whether Miami will pursue him or not.