Justin Ruggiano is four hitless plate appearances away from tying the longest hitless streak in baseball history. In some ways, it is fitting for a Marlins team that has looked like one of the worst offense of recent times.

Miami Marlins outfielder Justin Ruggiano is mired in one of the worst slumps in baseball history. He has not had a hit since July 8, and that streak has spanned 42 at-bats and 47 plate appearances. He has hit .000/.170/.000 in that time span. The eight walks he has are the most positive part of the thing, and the fact that he is still only striking out as much as he usually does (23 percent) during that time period at least means he should bounce back.

But then again, that seems pretty obvious. It would be really difficult for Ruggiano to keep this streak going, and for what it's worth, Mike Redmond and the Marlins are rooting for him.

"He just needs a break," Redmond said. "It's not like he's going up there and striking out every time. He's putting the ball in play."

But as Jeff Sullivan of FanGraphs pointed out, not all of Ruggiano's skid has been hitting line drives at people.

Not that looking at this differently could offer Ruggiano much consolation. Not only does he not have a hit; he hasn’t hit into many hard outs. Of his 30 balls in play during the slump, just two have been recorded as line drives, and they both came on July 13 against the Nationals...Both were fairly easily catchable. Neither was killed.

For Ruggiano, it has clearly been a combination of bad luck, bad calls (the above picture was a hit on replay, but he was called on out), and weakly-hit balls that has led him to put up a donut in the hit column for his last 47 plate appearances. Some of it is Ruggiano's fault, some of it is the Luck Dragon's fault, but all of it has definitely happened.

What are Ruggiano's odds of snapping this streak before breaking Eugenio Velez's record of 46 consecutive at-bats without a hit? ZiPS is projecting him as a .237 hitter, meaning that theoretically he is projected to have a 55.5 percent chance to get at least one hit in his next three at-bats. Hey, 55 percent is not bad at all. Fifty-five percent is a coin flip, and a weighted one to Ruggiano's advantage at that.

But how many coin flips on the offensive side have the Marlins won all season long? The Marlins entered the season with one dominant offensive player in Giancarlo Stanton. He was expected to hit .285/.387/.606 (.407 wOBA) this year. Even according to Baseball Prospectus's modest projections (50th-percentile .267/.345/.546), Stanton has hit closer to his 30th percentile marks. Most of the team's one-win or less players have even underperformed those expectations and played like sub-replacement level talent.

Going into this year, I would have expected the Marlins to be a bottom-five offensive team, competing with the Houston Astros for worst in the league. The current gap in wRC+ between the Marlins and the New York Yankees, Chicago White Sox, and Astros, the next three teams in the list of worst offenses in the league, is the same distance between those squads and the 18th-place Milwaukee Brewers and Minnesota Twins. 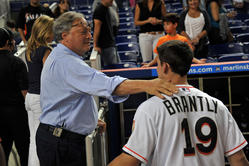 Catcher Rob Brantly, who was the Marlins' opening day catcher, is the most recent Miami player demoted to work on some aspects of his game. Brantly struggled offensively and was losing playing time to Jeff Mathis.

All of this points to the same issues that Ruggiano has faced during the hitless streak. While the Marlins are not going hitless as a collective unit (but don't rule that out for the rest of the season), the team is suffering from bad breaks and bad contact as well. The team has a .276 BABIP, which is the lowest in baseball. But the Chicago Cubs are hitting .277 on balls in play and have a wRC+ 20 percentage points better than the Fish compared to league average. The Marlins have a .101 ISO as a team, which is the equivalent of punchless players like Lorenzo Cain and worse than Emilio Bonifacio. That's right: the Marlins have hit for less power than Emilio Bonifacio. Unsurprisingly, the Fish are also second in the league in ground balls as well, at 48.6 percent. The Marlins may not be getting lucky on their batted balls, but that is also because they are not hitting the ball hard.

So while Ruggiano's hitless skid is a mind-blowing (negative) accomplishment, it should hardly surprise people when it comes in the midst of one of the worst offenses since 1990. Given the profile of Ruggiano, a guy who just had a breakout season and was previously a strikeout-heavy career Quad-A player, it should come as no surprise that the baseball gods rained unfortunate misery on such a nice player. Marlins fans would have preferred to see a veteran like Juan Pierre or Jeff Mathis suffer this ignominious fate, since at least those guys started with little value. But Ruggiano's streak has shot his value going into the offseason, making him much harder to deal if the team was so inclined.

Now, the only thing that is left to do for the Marlins is to watch their on-field mirror approach a dubious, undesirable record and hope that he does not achieve that mark. Here's hoping Justin Ruggiano gets a hit tonight, because I am the last person who wants to write about him breaking a most disappointing streak in a few days.