This Day in Marlins History: Marlins release Wes Helms and demote Logan Morrison to the minors.

On this day in history, the Marlins released veteran infielder Wes Helms and demote outfielder Logan Morrison to the minors. Both moves were very shocking at the time and sent a message to the Marlins roster.

Share All sharing options for: This Day in Marlins History: Marlins release Wes Helms and demote Logan Morrison to the minors.

Two shocking moves coupled with an injury riddled season doesn't sit well with Marlins fans. On this date August 13, 2011, the Marlins lost to the Giants, 3-0 where Tim Lincecum dominated over seven innings striking out seven. The big news wasn't the game score however but the moves made after the game.

At the time the Marlins entered the game with a 55-62 record which didn't seem too bad at the time dealing with multiple injuries over that season. Some of the high profile injuries were Hanley Ramirez, Omar Infante and Josh Johnson to name a few.

Back to the shocking news after the game where we saw veteran infielder Wes Helms get released. Helms was a mainstay with Marlins later on in his career playing five seasons which included two stints with the Marlins playing with the 2006 team and the 2008-2011 teams. Over those five seasons Helms produced a solid line of .257/.321/.390 to go with an OPS of .711 in 581 games with the Marlins.

Helms' second stint began when the Marlins purchased his contract from the Phillies April 5, 2008 where the Marlins paid his entire contract for that season. The stint ended with Helms being unceremoniously released, with many believing that his advice to a young player led directly to the next event.

The second move that shook up the clubhouse on August 13th, 2011 was the demotion of up and coming outfielder Logan Morrison to Triple A New Orleans. Morrison drafted by the Florida Marlins in the 2005 amateur draft in the 22nd round has spent his entire career with the Marlins. He made his big league debut July 27, 2010, where he went on to register a line of .283/.390/.447 proving that he was ready for the big leagues. 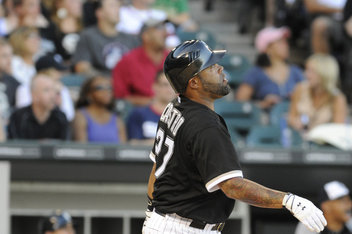 On this day in team history, the Florida Marlins have an unlikely hero in third-string catcher Ramon Castro. Castro's walk-off homer in the 13th inning helps the Marlins defeat the Los Angeles Dodgers for a dramatic win in 2003.

The 2011 season was another step in the process in Morrison's development where Morrison would start the year with the team and play a full season at the major league level. Joe Capozzi of the Palm Beach post provides us with an accurate description of the controversy of Logan Morrison's demotion to Triple A New Orleans. In Morrison's mind he believes that it was related to an off-field incident but wasn't ready at that time to divulge what it was. This shocking news dumbfounded most Marlins fans as Morrison was second on the team in home-runs and batting .249 at the time of his demotion.

Later on in the 2011 season the Marlins did call up Morrison but the message was already sent that no matter how high a profile the player is the minors are only a call away. After a demotion that lasted 11 days the Marlins finally felt it was time to call up Morrison on August 24, 2011. In his brief stint in Triple A, Morrison only went 4 for 24 but the Marlins felt that he had learned from his mistakes and was ready to help the big league club once again. Morrison's stats to date include a line of .254/.343/.442 for an OPS of .785. Morrison also has contributed 124 extra base hits in 323 games with the Marlins.