Jose Fernandez did not have a strong outing for the Miami Marlins, while Lance Lynn dominated the Fish for the St. Louis Cardinals. The Marlins fall just short and get swept, 3-2 the final.

The Miami Marlins did not get to commemorate the selection of Jose Fernandez to the All-Star Game with a nice outing from the 20-year-old right-hander. Instead, Fernandez turned in an erratic outing that included five strikeouts but four walks in six innings pitched. Fernandez ran into trouble immediately in the first inning, surrendering a home run to Matt Holliday at the onset of what looked like it may be a difficult start.

Fernandez was able to fool hitters during the outing by getting 11 swings and misses in 85 pitches thrown. Unfortunately, he ran into the same problem he has faced a few times in the past during bad outings: he was not near the strike zone at all. 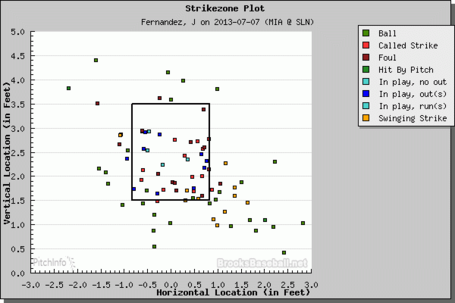 His lack of control has been his undoing in his lesser starts, and this one was no different. Fernandez's four walks, combined with one hit-by-pitch, yielded the extra runners the Cardinals needed to break through with two runs in the third inning, the last time the Cards scored in the game.

Meanwhile, the Marlins did not struggle to at least get hits against Lance Lynn, as the team pulled out nine hits including two doubles and a triple. Unforunately, those extra-base hits were the only ones that generated runs, as Derek Dietrich's second-inning double led to an RBI single by Adeiny Hechavarria, while Marcell Ozuna's fourth-inning triple was brought home by a Jeff Mathis single.

Outside of that, however, the Fish were fooled by Lynn. He struck out seven Marlins in seven innings and walked just one. The Marlins got a chance against Trevor Rosenthal in the eighth inning, as the team loaded the bases with two outs off a Giancarlo Stanton double and Logan Morrison single, followed by a Dietrich hit-by-pitch. Pinch-hitter Greg Dobbs could not complete the rally, and the Marlins eventually lost.

The Fish suffer their first series loss in half a month. They also take it in sweep fashion. They will be at home tomorrow to face the Atlanta Braves.