After weighing their options over the past few weeks, the Miami Marlins front office finally pulled the trigger on dealing Ricky Nolasco. The team is set to bolster their pitching depth, adding three minor league arms in Angel Sanchez, Steven Ames, and Josh Wall.

Angel Sanchez is the lone starter among Miami's three-player haul. The 23-year-old signed with the Dodgers three years ago for a paltry $7,500, but quickly made a name for himself by posting a 2.82 ERA in 20 appearances for low Class A Great Lakes. The California League proved a difficult test for Sanchez last year. His ERA shot up to 6.58, though his peripherals remained largely intact.

The Dodgers moved Sanchez back to the Midwest League to begin the 2013 season, where he put up a 4.88 ERA in 14 starts before receiving a promotion to Rancho Cucamonga. He has struck out 12 batters and allowed three earned runs across nine innings pitched there thus far.

The right-hander comfortably throws a mid-90s fastball, and also features a strong slider. His curve-ball and change-up are less developed offerings, which might prompt a conversion to the bullpen. Sanchez has a mid-rotation ceiling if he can harness his stuff, and demonstrate stronger finesse on the mound.

The second pitcher, Josh Wall, has already seen time in the majors. A second round pick in 2005, Wall toiled through the minors for years before converting to a reliever two years ago. Standing at 6-foot-6, consistency has been a long-running issue for the right-hander. He has mostly abandoned his curve-ball and change-up, focusing instead on his mid-90s fastball and hard slider. 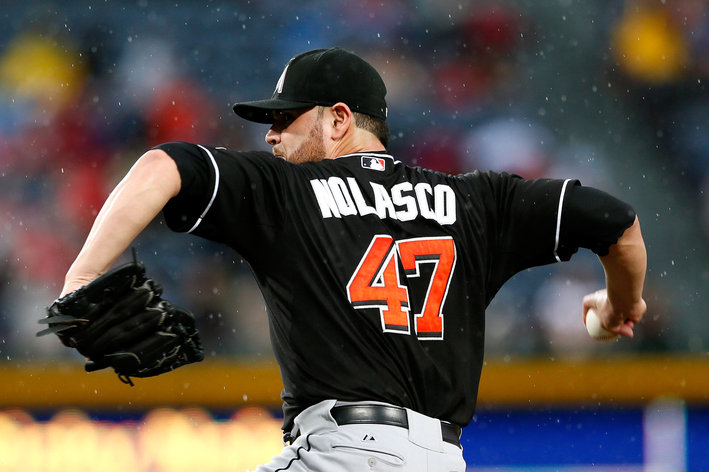 The Miami Marlins received quantity over quality in the Ricky Nolasco trade to the Los Angeles Dodgers.

While he found new life in the bullpen, Wall's numbers in Triple-A this year indicate on-going control problems. He has walked 16 batters in 27 and one-third innings pitched, and holds a 5.60 ERA. He has also collected 12 and two-thirds innings of major league work, where he has allowed 17 earned runs, walked seven batters, and struck out 11.

The final of the piece of the puzzle is Steven Ames, whom the Dodgers selected out of Gonzaga University in the 17th round of the 2009 draft. Since then Ames has dominated the minors, holding a career 2.22 ERA and a strikeout rate over 30 percent. His numbers have dipped in the hitter friendly Pacific Coast League this year, where he has a 3.67 ERA and 18.4 percent strikeout rate.

Ames's low- to mid-90s fastball and slider combination aren't especially flashy, but he commands both pitches well, consistently throwing strikes. Like Wall, he projects as an effective late-inning bullpen arm.

Hearing, #Marlins are not picking up any of Nolasco's remaining salary. #Dodgers

The Marlins were rumored to have tentative deals in place with the Rockies, Dodgers, Giants, and the Orioles. Some potential trades included teams providing salary relief for the $5.7 million remaining on Nolasco's contract, while others had the Marlins footing the bill in exchange for better prospects. According to Joe Frisario of MLB.com, the Marlins opted for salary relief.

The Marlins partnered up with the Dodgers at last year's deadline for another major trade, dealing Hanley Ramirez and Randy Choate for Nathan Eovaldi and Scott McGough.