The Miami Marlins and their surprisingly winning ways

The Miami Marlins have been winning plenty of games since the end of May, and it has confused many Marlins fans. What happened this past month-plus and can the Fish keep it going?

Share All sharing options for: The Miami Marlins and their surprisingly winning ways

Through May 30, the Miami Marlins had won just 13 games on the year. They were a staggering 13-41 through almost two months of the season, and the talks of being historically bad were approaching a fevered pitch. The Fish looked like they would be competing with the Houston Astros and possibly the record books for a mark of embarrassment.

Since the start of the May 31 series against the New York Mets, the Fish have gone a respectable and surprising 19-11. They now have a 32-52 record, having reached "only" 20 games under .500. A 19-11 record does not sound like much, except that that is .633 wining percentage over the course of the past month and change. The Marlins have won seven of their past ten series played, with losses to the Philadelphia Phillies, Milwaukee Brewers, and Arizona Diamondbacks as their only blemishes. They have beaten New York Mets, St. Louis Cardinals, San Francisco Giants, San Diego Padres, Minnesota Twins, and Atlanta Braves in series, two of them being four-game sets. A glance through those names reveals the defending World Series champions, two of the best teams in baseball, and another NL West division contender among them.

How have the Marlins sparked such an impressive comeback routine to get themselves back to close to a .400 win percentage for the season? Let's examine some of the underlying numbers and see if the Fish have been playing well, getting lucky, or a little bit of both.

As in all situations, the first thing we should check for the Marlins in this 19-11 streak is their run differential. The Fish scored 129 runs during that time frame, a scoring clip of 4.3 runs per game. That is a significant improvement over the horrific 2.72 runs per game that they scored in the previous 55 games.

Unfortunately for the Fish, their winning percentage does not quite match up with their Pythagorean expectation when you look at how many runs the team allowed. The Marlins may have scored 129 runs, but they also allowed 122 runs over the same span. A plus-seven run differential is certainly above .500, but it is not a .633 winning team. The Marlins scored and allowed runs like a .526 winning percentage team. If you compare those two percentages over the course of an entire 162-game season, that would be the difference between a 102-win team and an 85-win team.

Of course, the difference when examining it in a short-term, 30-game span is minimal. The Marlins won 19 of those 30 games, but their run differential would have expected them to win a shade under 16 games. That three or so win difference can be attributed to a few things, but often the first thing considered is a team's record in one-run games, which should be coin flips. The Marlins went 5-2 in one-run affairs between May 31 and yesterday, meaning they benefited somewhat from winning the close games. Two of those coin flips go the wrong direction and the Marlins are once again right back where their run differential would have expected them to be.

The Marlins were allowing 4.31 runs per game in their first 55 games, and that number dropped down to 4.07 runs per game in the last 30. That difference was not major, but the one that did make an impact was the difference in runs scored per game. The Fish scored more than 1.5 runs per game more in this latest streak than they did in their paltry first two months. Expand that difference over a full season and you are looking at a team that would have outscored the old Marlins by 256 runs.

Was the team hitting as well as they were scoring runs? In the month of June, the Marlins were still hitting poorly with a .298 wOBA, good for 14 percent worse than the league average. Their performance versus the league average was only better than four National League teams. Overall, the team hit a .302 wOBA during the overall 19-11 streak; such a mark would have ranked 13th among the 15 National League teams this season, ahead of only the Washington Nationals and Mets (and the full season's Marlins).

Based on the advanced statistics, we can get an estimate of how many runs the Marlins were expected to score given their hitting performance. This would neutralize the team's situational hitting, which in recent years has been poor. The Marlins' wOBA and performance versus the average in June would have had them score just 95 runs compared to the 107 they actually scored. When you look at the streak as a whole, the Marlins would have been expected to score just 118 runs, 11 fewer than they actually scored.

It would seem as though the Marlins were not only lucky to win a few more games than they were expected based on their runs scored and allowed, but they were also lucky to have even scored that many runs. If the Marlins had scored just the number of runs listed here, they would have been a .485 winning percentage team and won around 14 or 15 games.

Despite the fact that the Marlins probably hit worse than their runs scored numbers showed, there is no doubt that this incarnation of the team was a better hitting ballclub than the April-May version. Part of the reason is likely some regression on the team's performance on things such as balls in play; the Marlins hit a perfectly average .299 on balls in play in June, and that followed a month of May in which they hit .258 on those balls.

But the major part of the difference between April and especially May and the June team onward was the return of Giancarlo Stanton and Logan Morrison from injury. The Marlins were starting players who struggled in place of those two in the lineup, and since their return, the Fish offense has flourished.

If you extrapolated the difference between Morrison's current performance to the 276 plate appearances of the first two months of the season, the difference would more than three wins.

In April and May, Marlins first basemen hit for a .255 wOBA and combined for -0.8 FanGraphs Wins Above Replacement. In 67 plate appearances from June 9 onward, Logan Morrison has hit .328/.418/.569 (.419 wOBA) and has accumulated 0.6 fWAR in that short timespan. If you extrapolated the difference between Morrison's current performance to the 276 plate appearances of the first two months of the season, the difference would more than three wins. Even if Morrison produces at his projected clip. the difference over two months would 1.5 wins. Morrison makes a huge difference over players like Greg Dobbs and Casey Kotchman.

Ironically, one cannot make the same case with Giancarlo Stanton. Stanton has hit a respectable, if underwhelming (for him), .373 wOBA since he got back into the lineup in 85 plate appearances. In May, the primary players replacing Stanton in the lineup was Chris Coghlan, who had a nice month hitting .322/.385/.542 (.392 wOBA) and Justin Ruggiano, who had a bad month at the plate but was good overall with 0.4 fWAR. Take a prorated version of both players' playing time and you get a total of 0.5 wins. Since Stanton returned on June 10, he has racked up 0.4 wins, but if you prorate it out to the Coghlan/Ruggiano playing time, it breaks even.

Having said that, it is a no-brainer that Stanton going forward is better than the two outfielders listed. Had Stanton performed as projected, he would have been 0.6 wins better than the ragtag outfield crew that replaced him.

The progression of Jose Fernandez 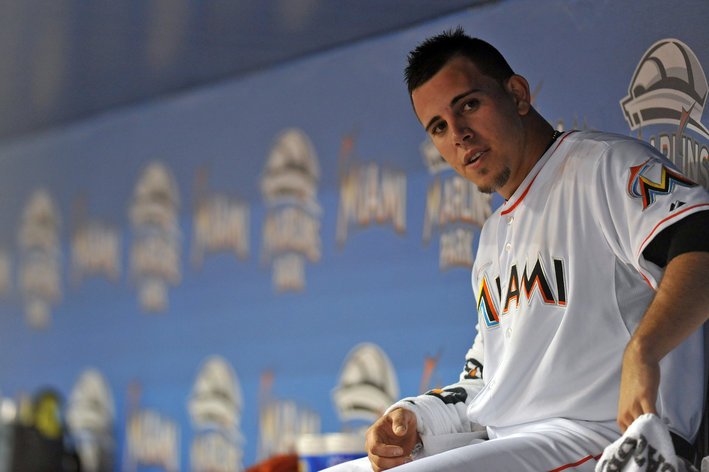 The promotion of phenom Jose Fernandez to begin the season was one that many around baseball questioned. Now, Fernandez is making the decision look better with each passing day.

The Marlins have definitely been better this past month-plus, and it has been a sight for sore eyes. They have not been perfect, and indeed a little bit of luck has helped them along the way, but the returns of Stanton and Morrison have provided major dividends. Combine that with the quiet growth of a strong pitching staff and a defense that has been significantly improved over the last few years and the Fish have mounted a strong comeback this season.

Can the team continue playing this well? Probably not, as a number of things are unlikely to continue. Marcell Ozuna may be a spectacular defender, but he cannot keep up the monstrous UZR pace that he is at. Likewise, he will need to add more power before he can continue to hit at his current clip. Morrison should regress, but Stanton should do so in a positive direction, so perhaps they will cancel each other out.

I would not be ready to say that the Fish are a .500 team going forward, but this club is beginning to look more like the team I predicted would win close to 70 games before the season started. They are still bad, but not too bad.