Although several of Miami’s young players stood out during a 15-win June, pitcher Jose Fernandez could be the Marlins’ lone All-Star representative in 2013. Fernandez is 2-1 with a 1.67 ERA in his last three outings.

When Hanley Ramirez was hitting .300 and Josh Johnson led the league in earned run average, there was never a question in regard to who would be representing the Marlins at the All-Star game. With several young players having gone through midseason slumps, rookie phenom Jose Fernandez could represent Miami in New York on July 16.

Though he showed that he was able to pitch at the major league level after making just a handful of starts in the big leagues, Fernandez has been particularly dominant of late. Over his last three starts, he is 2-1 with a 1.67 ERA and 0.93 WHIP.

"He should be [an all-star]," manager Mike Redmond said in a Sun-Sentinel interview Tuesday before the start of the Marlins' three-game series with the Braves. "He's been consistent. He's pitched well. It just depends on what do they need [on the NL roster]; if they need another starter or what."

Fernandez has also shown that he has the ability to stay competitive when he doesn't have all of his pitches working. In his most recent start against the Padres, the majority of the pitches he threw were fastballs. He still managed to strike out 10 against San Diego in a 4-0 win.

Redmond also said that Fernandez's situation reminded him of another rookie who had a dominant year while he was a backup catcher for the Marlins in 2003. Dontrelle Willis had put together a winning streak just after being called up.

"I think back to Dontrelle. He came up and won nine straight games," said Redmond. "Had we had maybe this team from the first start, maybe [Fernandez's] record would be a lot better."

His 5-4 record could be overlooked only because Miami has improved of late. When Fernandez was first called upon, the team was struggling to score runs and hit with runners in scoring position. 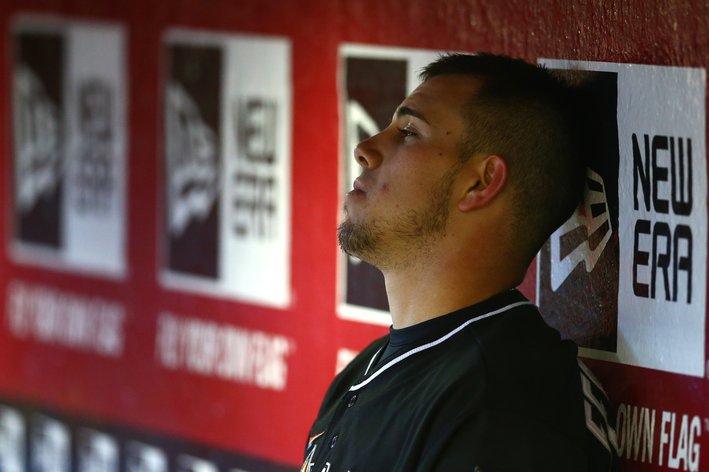 The deadline for All-Star Game roster selections is coming near, and the race for the Miami Marlins' lone representative is coming to a close. But has Jose Fernandez already locked up this race?

Though he may not have had the best command in some of his earlier outings, several of his four losses were indicative of an offense that provided little, if any, run support for its starting pitchers.

When analyzing Miami's roster, there aren't many other clear choices. Center fielder Marcell Ozuna has hit above .300 with runners in scoring position, and Giancarlo Stanton has been consistently getting on base since his return from the disabled list.

However, an early June slump may have hurt Ozuna's chances, and the odds of Stanton making the team for the second consecutive year were likely damaged by a stint on the disabled list.

Steve Cishek may be another possibility, though potential All-Star discussions are impressive for a Miami team that at one point may not have had a representative if the league didn't require every major league team have at least one.

Fernandez already has accomplished a lot in his young professional career, making the jump from Class A to the majors earlier in the year. Being an All-Star would just contribute to the list.

"I think you are looking at the guy who has the ability to be the face of our franchise," Redmond said. "A guy who is 20-years-old, and he's come to the big leagues, and he's been so good for us. You look at his story and what he's been able to do. He's a great story. He's got the ability to be a No. 1 pitcher for a long time."