The Miami Marlins were offered a deal from the Colorado Rockies including "two pretty decent prospects," provided the Fish paid Nolasco's remaining salary. Who could those prospects be?

The Ricky Nolasco trade saga continues. After the Miami Marlins starter threw his 1000th career strikeout last night, there is a very good chance that he will not make another start as a Marlin, as the Fish will also welcome back Henderson Alvarez to the rotation as his likely replacement. Nolasco has been at the front of a number of trade rumors, most strongly associated with the Los Angeles Dodgers.

Here at Fish Stripes, we already discussed the potential trade return from the Dodgers for Nolasco, but another team has apparently made an offer to the Marlins. The Fish spoke with the Colorado Rockies about a trade, and the Rockies made an offer on the table with some decent players, according to Jon Heyman of CBSSports.

The Rockies are said to have offered two pretty decent prospects but are resistant to paying the salary.

Once again, the Marlins' salary demands may be getting in the way of a return, particularly one involving "two pretty decent prospects" from a farm system that was ranked near the middle of the pack in baseball. While the Rockies may not be deep in terms of prospects, they do have promising players. So who might have been offered to the Marlins?

Remember what we said in the Dodgers article regarding the tiers of trade returns we can expect for Nolasco.

But what type of prospect could the Marlins possibly get in return for Nolasco? If the team is being realistic, there should be two tiers of player whom the Dodgers would give up in a trade: one tier with no salary being paid by the Marlins, and one with most or all of the salary being paid.

The Marlins, in the Rockies scenario, would be receiving players from the salary paid tier, akin to those in the Dodgers organization. In the previous article, we mentioned players like Chris Reed and Joc Pederson. What names on the Rockies are similar, and what could have been the two-player offering the Rockies sent over?

To figure that out, I will use the same process as I did with the Dodgers: enlisting the help of the experts. I took a look at three lists: the Minor League Ball preseason top 20 prospects, the Baseball Prospectus preseason top 10, and SB Nation's Rockies blog Purple Row's midseason top 30 lists.

This tier is supposed to include B-ranked players with some potential upside. The Marlins should be able to get one of these players from the Rockies at least in a trade.

Anderson seems to be the "safe" fit for the Marlins in this case. Anderson is a former first-round draft pick from 2011, but his profile is more of an acceptable college player with low upside. As a lefty, Anderson brings some natural advantages, but the fact that his best pitch is easily his changeup eliminates any concerns about his ability to be a starter. He shows good command and a deep array of pitches, but the fastball is described everywhere as "fringe" and the rest of his stuff is good, but not swing-and-miss good. His primary tools involve crafty lefty deception rather than pure stuff.

That combination of descriptions from multiple sources has Anderson being worthy of a "number four starter" rating for his potential. He is control artist without much in the way of strikeout stuff, though his rates have gone up in the move to the California League in 2013 (22.2 percent strikeout rate). That bodes some promise, but it does not change the fact that he is not motoring past the minor leagues as he should for a college player. This is a low-upside pickup for the Fish with a higher floor, but there is still a moderate risk of flame-out due to middling stuff.

Grade A arm, but Grade C/D+ in the control and consistency departments. -John Sickels, Minor League Ball, on Tyler Matzek

The rankings on Matzek differ from place to place, but he is the high-upside player the Marlins could acquire here. John Sickels ranked him ninth on the team list, noting that he has a "grade A arm, but grade C/D+ in the control and consistency departments." He has always flashed a ridiculous strikeout rate (career 22.3 percent strikeout rate), but also an equally ridiculous walk rate (career 16.3 percent). Those two aspects worked to create a tantalizing prospect who had tools for days but could not control any of his secondary pitches.

On the plus side, not only does Matzek have an exciting fastball, but he also does have good mechanics from all the scouting reports. Jason Parks of Baseball Prospectus says that Matzek has the "mechanical profile and athleticism [to] take to adjustment." He is also still young, having been drafted out of high school and currently at age 22. But the fact that his strikeouts have dropped in Double-A while the walk rate remains fairly high is indicative of concern. If the Marlins opt for him, it will be a pick for upside and a potentially devastating starting pitcher or a bullpen question mark, akin to the fate of Nathan Eovaldi.

Bettis was on his way to a fantastic career start and a look at the top prospect lists until he got injured and missed all of 2012. In 2011, he threw 169 2/3 innings in the hitter's environment of the California League in High-A and managed a 3.34 ERA, 2.73 FIP, and a 26.7 percent strikeout rate. He shows an easy plus fastball and a plus secondary offering in his slider, and both pitches have swing-and-miss capabilities.

The injury was a question mark heading into this season, but Bettis has thrived in eight starts thus far in Double-A, posting a 3.73 ERA, 3.25 FIP, and 23.4 percent strikeout rate. Those numbers should quell a number of concerns about whether he could bounce back from his shoulder injury.

However, there are still pocks on Bettis's record in addition to the injury. His ceiling is lower than that of Matzek's because of his lack of pitching arsenal. Both Anderson and Matzek can throw changeups and other pitches to decent effect, but Bettis has yet to develop anything of that kind. A lack of a changeup tertiary pitch is still a death knell to potential starters, meaning that he would likely end up as a late-inning relief option instead. That is a perfectly acceptable player, but one with a lower ceiling than any back-end starter.

The Fish were offered two decent prospects, which means that the team likely received an interested second player with upside and flaws as an add-on to the primary pitching prospect. Among the interesting players in the Rockies' system, one that comes to mind is Will Swanner, the catcher currently working in High-A. Swanner has high power potential, as he has a career .236 ISO and has hit 27.4 homers per 600 plate appearances in his minor league career thus far. He also cannot hit the ball otherwise, as he has a horrific 31.4 percent strikeout rate in his career too. Swanner may also not stick at catcher, making his prospects a little more sketchy.

Catcher Tom Murphy is another player of interest, as the Marlins could use a catching prospect to help out Austin Barnes and J.T. Realmuto. Murphy is a college player who is tearing up Low-A right now (.321/.402/.674, .470 wOBA), but that may be in part due to his age (22 years old). But he may have a better chance at sticking at catcher than Swanner, so he has that edge. 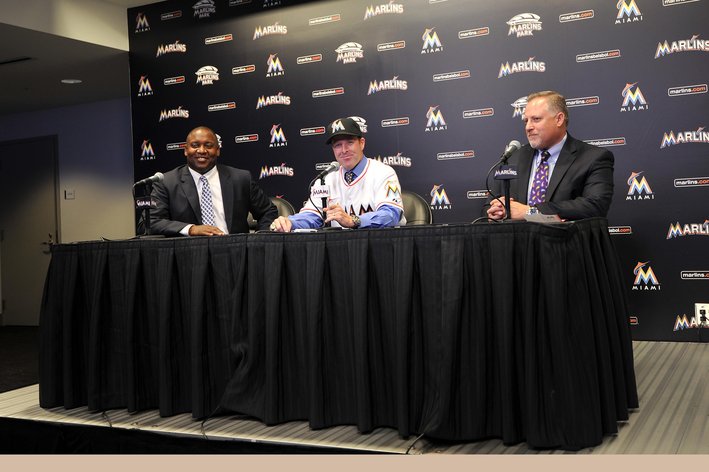 The Miami Marlins are sellers in this season's trade deadline, but that does not mean that the team is uninterested in acquiring assets. What types of players is the team looking for in return for their trades?

The Marlins could receive one of of the first group's players plus an add-on in the C-ranked level, and even if they paid off all of Nolasco's contract, it would be an overpay by the Rockies. But given that this is the trade deadline, I would not be surprised if overpays do occur, especially for a rare commodity (this season) like starting pitching. So a package as profiled above would be more than welcome for the Fish.

What would be the ideal choice? Each of the three pitching prospects detailed above are flawed, with Tyler Matzek having the highest upside. At this point, it is best the FIsh try and chase upside rather than go for low-ceiling / high-floor players given that the team already has plenty of pitching depth. Given that scenario, Tyler Matzek would be the easy choice for first pick among the pitchers considered. Matzek plus one of the two listed catchers would be a more than acceptable return, though Bettis would also be an option.

What was actually offered is anyone's guess, but if the Marlins were thrown a deal similar to the one listed here, it would have been hard not to toss in the $5.5 million to cover Nolasco. Then again, I say that as the guy who is not paying the money, so it remains to be seen what Jeffrey Loria and his front office ultimately pull off.