The Miami Marlins are desperate for offense and Adeiny Hechavarria has had a hot month. Naturally, the Fish put one of their worst hitters in the leadoff spot.

Over the weekend, the run-starved Miami Marlins entered an even worse fasting state, as the Fish were held scoreless over the course of the Milwaukee Brewers series, pushing their consecutive scoreless innings streak to 37 innings. This highlights the Marlins' extreme difficulty at the plate, exemplified by players such as Jeff Mathis, Juan Pierre, Placido Polanco, and Adeiny Hechavarria.

Quietly, though, as the rest of the Marlins have struggled throughout June, Hechavarria has soared. He had eight hits in 16 plate appearances during the four games encompassing the Marlins' scoreless streak, and for the month of July, he is hitting .429/.438/.492 (.408 wOBA). For a player who was batting just .203/.247/.288 (.221 wOBA) through the month of June, this appeared to be some sort of breakout.

So naturally, the Marlins jumped to exactly that conclusion, and manager Mike Redmond, in a desperate move to find some runs, moved Hechavarria to the leadoff spot on Saturday.

"He's worked so hard with [hitting coach Tino Martinez] on his approach," Redmond said. "Tino has put in a lot of hours in the cage with him, and you're starting to see the results. You can see his confidence when he goes up to the plate."

Redmond says that Hechavarria's approach at the plate has improved. Well, there is an easy way to point out whether it has or has not: let's take a look at his plate discipline numbers month by month.

Has Hechavrria improved? It's difficult to say. The one change we see in his plate discipline is that he is being more aggressive with his swings after spending much of the season trying to take more pitches. That has worked this season, because he is making contact on 90-plus percent of his swings both in and out of the strike zone. That may be the primary benefit that we have seen from Hechavarria this month. He started showing signs of that in June as well.

Can that be repeated? In the last two months, Hechavarria has made contact on about 88 or 89 percent of pitches out of the zone. Since 2010, the five leaders in out-of-zone contact rate are Marco Scutaro (88.7 percent), Pierre (88.1), Victor Martinez (84.2), Ichiro Suzuki (83.4), and Nick Markakis (83.3). Those represent some of the best contact hitters in baseball, and only two of them have made contact as well as Hechavarria has the last two months. I am not confident enough of Hechavarria to declare that he is ready to take on the mantle of contact hitting to that extent, and that makes it difficult to expect more of the same from him going forward.

But even if you could expect more of the same approach, could you get more of the same results? Hechavarria is hitting .500 on balls in play this month. Just last month, with a similar but less aggressive, approach, he hit .268. Maybe the key for Hechavarria is to stay more aggressive rather than to take pitches, but it is not as though his success this month is repeatable. His walk rate is down to just 1.5 percent on the month, and he is still not driving the ball with any authority; he has just a .064 ISO this month.

You can see that reflected in Hechavarria's spray chart (all charts courtesy of Brooks Baseball and MLB Gameday data): 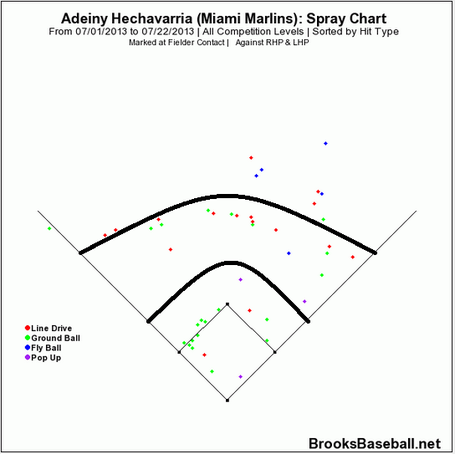 I approximated three different "zones" where balls could be fielded. One was the infield. The second level is the Carlos Lee zone, or the area in between regular outfield play and the infield, where bloop singles, grounders up the middle, line drives, and pop ups reside. A good number of the non-pop ups turn out to be singles that zone. The last is the deep fly ball / extra-base zone, where all your extra base hits or fly ball outs tend to go. You can see that Hechavarria has lived in that zone for most of the month, and he has done so with more line drives (30.2 percent in the month) than usual. That represents both good contact and a bit of luck that should regress.

Compare that to a player like Stanton, who is struggling in July. 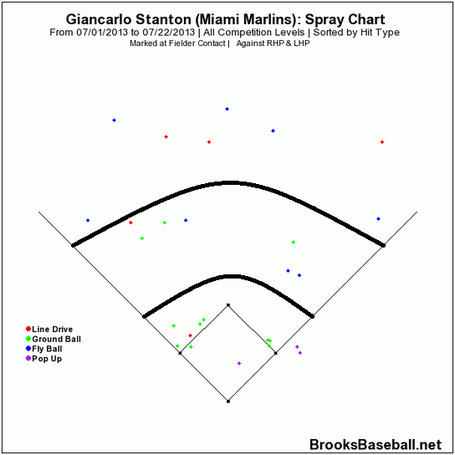 Stanton is hitting the ball harder than Hechavarria, as evidenced by the fact that he has almost as many deep fly balls as Hechavarria despite a lot fewer balls in play this month. The difference is that Stanton has rarely lived in that middle zone where many singles reside. 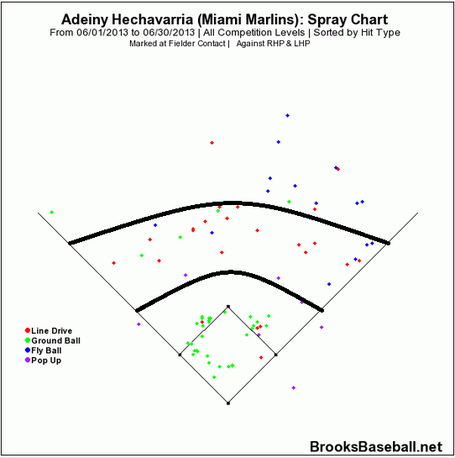 His performance last month looked similar on balls in play, as Hechavarria littered that middle zone. But why did he have such a bad mark last month and such a good one this month? Part of it is the aforementioned better contact, but a good deal of that is also good luck. A combination of a few more balls dropping in and a few more well-hit line drives led to Hechavarria having a fantastic month despite little change in his approach and subsequent strikeout and walk results.

Hechavarria has not changed the way he hits. He may be more aggressive in the last two months, but he is not suddenly a different hitter than he was just a few weeks ago, despite the different results. A lot of this is unsustainable, but the Marlins moving him to the leadoff spot indicates that the club believes that it is at least partly real. Until I see real changes in his strikeouts, walks, and power numbers, it is hard to take any of the so-called "improvement" seriously. It may necessary for Hechavarria to swing more to become a better hitter (after all, not everyone can learn plate patience), but that does not make Hechavarria's slight change a good thing for his chances to become a good Major League hitter.