Henderson Alvarez and Wily Peralta were embroiled in a pitcher's duel, but it was the Milwaukee Brewers who came out on top versus the Miami Marlins thanks to a Caleb Gindl walk-off home run.

The Miami Marlins tried to hold back the Milwaukee Brewers and almost succeeded. Henderson Alvarez had an odd start in which he only struck out one batter, but also only gave up five hits and shut out the Brew Crew through seven innings. His fastball was working decently, as he was working at 92.6 mph and got six swings and misses in his 83 pitches. He also almost exclusively used the sinker, as 75 of his 83 pitches were of that variety.

Alvarez was also able to keep the ball low in the zone. 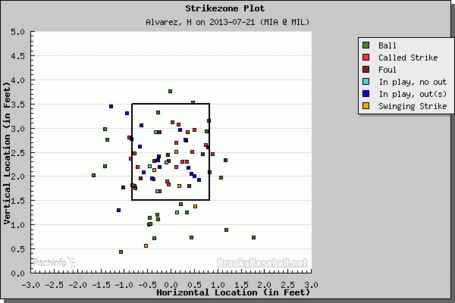 However, the problem arose when the Fish's offense could not counter versus Wily Peralta. Peralta struck out seven Marlins in eight innings and threw shutout baseball as well. The Marlins only reached base six times versus Peralta, and two of those were on errors from infielders Jean Seguera and Rickie Weeks. The Fish got all of two hits against the young righty, and neither came at an opportune time.

The bullpens both held onto the game long enough to take the teams to the 13th inning. Ryan Webb was entering his second inning in a row and had a strong first inning involving two strikeouts following a leadoff single and steal. Webb threw his first pitch to rookie Caleb Gindl, who had caught the interest of Marlins announcers RIch Waltz and Preston Wilson by hitting the ball harder than the Marlins outfielders initially expected. Gindl proved the announcers right, taking the next pitch opposite field and into the seats for a walk-off home run.

The Marlins were shut out in all three games of the series and have not scored a run in 36 consecutive innings dating back to the tail end of the Washington Nationals series finale.

Miami Marlins vs. Milwaukee Brewers: Brewers walk off 1-0 over Fish