The Miami Marlins have had a more successful first half in terms of pitching than they did on the offensive side, and that starts with the fantastic first half of Jose Fernandez.

The Miami Marlins may have had a terrible offensive first half (pun somewhat intended), but the Fish at least managed to keep pace somewhat with the rest of the National League in terms of allowing runs. The Marlins' pitching staff had just enough bright spots to overcome a difficult start from a series of replacement pitchers, as the team's intended starting rotation did not come around until June.

While much of the rotation came along late, two players held up the staff at the beginning of the season. While one of those players has since left, the hope is that the other will stick around for a while.

The Marlins' pitching is strictly middle-tier, but that is in part because of a series of poor early season performances by players who were not expected to be in the rotation. Due to injuries to Henderson Alvarez and Nathan Eovaldi, the Fish were stuck playing guys like Wade LeBlanc and Alex Sanabia, and that hurt the Marlins' staff. As a result, the Fish are just 21st in FanGraphs Wins Above Replacement (fWAR) in terms of pitching, with the 14th-best ERA and FIP.

The rotation is now complete, and it has thus performed much better. Combine that with a decent performance from the bullpen and the Marlins may come out doing better than expected by year's end.

Naturally, the team's brightest highlight of the first half is their lone All-Star, rookie right-hander Jose Fernandez. In almost any other year, Fernandez would be a shoe-in for Rookie of the Year consideration, except that this season Shelby Miller has been just as dominant and is unlikely to face an innings limit for the contending St. Louis Cardinals.

But that takes nothing away from Fernandez's spectacular campaign thus far. He has had his share of bad starts, but the stuff has been electric overall. His 24.3 percent strikeout rate is reminiscent of other fireballing righties of Marlins' past like Josh Beckett and Josh Johnson, and Fernandez has the excellent 94.7 mph fastball to back that up. His curveball already looks like one of the better offerings in the game, and his changeup is a work-in-progress that seems to be paying off as well.

Fernandez still has some control issues (9.4 percent walk rate), but his game is on the rise and he is just 20 years old. If this rookie campaign is any harbinger of the future, things are looking up for the Marlins' pitching staff. 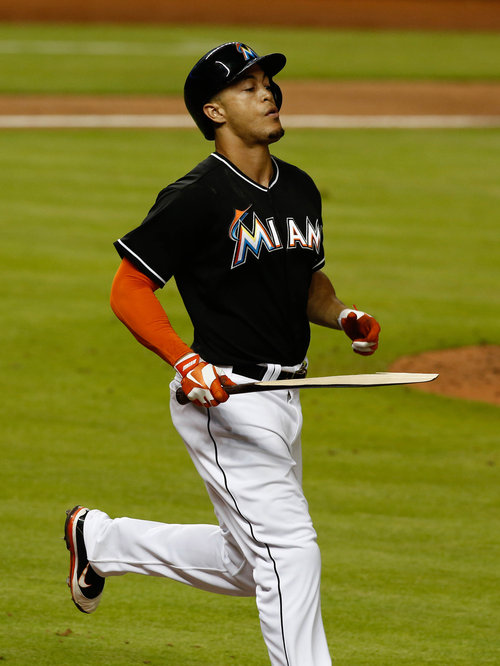 The Miami Marlins have finally reached the All-Star break, and that means it is time to review the Marlins' first half. First, Fish Stripes reviews the team's pitiful offensive performance marred with injuries and poor play.

The injury to Alex Sanabia was a fortunate one for the Miami Marlins, as bad as that is to say. Sanabia finally got a chance to prove that his 2010 late-season performance could be repeated, but after the injury problems he had over the last three seasons, the right-hander simply did not have the stuff to make it in the majors. His 4.88 ERA was actually lower than his expected performance by FIP of 5.86.

He struggled in all aspects of the game, as he was unable to strike out batters (12.4 percent rate) despite a strong 9.9 percent swinging strike rate. His walk rate was all too high (10.0 percent) and he gave up way too many homers (10 in 55 1/3 innings) to compensate for the unusual low strikeout mark. The home run rate in particular was unlikely to be fixed, as he had a habitual issue with lack of ground balls, as evidenced by his 38.8 percent ground ball rate this year.

The Marlins afforded Sanabia the opportunity to prove himself, but it turns out they were right not to trust him in the first place. It seems Sanabia's meager minor league numbers were indeed a correct assessment of his abilities.

Turner's performance so far has been good; he has a 2.33 ERA and a 2.89 FIP to boot. But his numbers are rooted in a something he has typically had problems with: home runs.

The young Marlins starters acquired in recent trades all hold interest in the eyes of Marlins fans. But among them, Jacob Turner seems to be the most intriguing of them all. Turner's performance so far has been good; he has a 2.33 ERA and a 2.89 FIP to boot. But his numbers are rooted in a something he has typically had problems with: home runs. So far, Turner has allowed just one long ball in 54 innings and 213 batters faced. That seems extremely unlikely to continue, especially since he has had an issue with homers as recently as last season, when he gave up nine in 55 innings. The likely regression is noted when you use ERA retrodictive metrics (metrics that try to create an ERA based on controllable on-field factors rather than simple runs allowed) like xFIP and SIERA, which can control for home run likelihood. Turner's 4.07 xFIP and 4.34 SIERA look a lot worse than his current ERA and FIP.

The looming home run regression is even more concerning when you consider how Turner's strikeouts and walks have gone so far. Last season, he struck out 17.1 percent of batters with the Fish, but that number is down to 16.4 percent despite a stable swinging strike rate. He has also walked more batters this year with a 7.5 percent walk rate. A sharp increase in home runs without a change in these crucial peripheral numbers may spell difficulties going forward for Turner.

However, for the first half at least, he has performed excellently. and that deserves some merit. Turner has been worlds better than Sanabia, and his presence in the rotation is at least something to watch in the second half.

Ricky Nolasco: Nolasco played his role as midseason trade fodder perfectly, as he had his best first half since 2008. His 3.85 ERA and 3.51 FIP were strong enough to garner serious trade consideration, and the only reason why he did not earn more at the deadine was because of his salary and the Marlins' stubborn ways, not due to his performance. Grade: B

Nathan Eovaldi: Eovaldi's 2.93 ERA is not indicative of how good he has been in five starts thus far. Other than his performance versus the Arizona Diamondbacks, Eovaldi has been shaky. Then again, he also has a new 96 mph fastball that could prove to be the difference between being a solid starter or a reliever. Grade: C+

Henderson Alvarez: It is too early to say anything in particular about Alvarez, but the signs have been mixed. On the one hand, he has managed more strikeouts than he was getting last season. On the other hand, he has not looked particularly sharp, and his stuff still is not missing bats (5.2 percent swinging strike rate). In addition, his ground ball rate is way down as he has allowed too many sharply-hit balls early in the year (44 percent line drive rate). Grade: Incomplete

Kevin Slowey: Kevin Slowey is doing about as well as we could expect. He always put up decent strikeout and walk numbers despite middling stuff, but he works in the strike zone so much that he is vulnerable to the home run. That's exactly what's happened so far. Grade: C

Wade LeBlanc: It was not a pretty end to the Wade LeBlanc era in Miami. The home runs finally caught up to him, making his mediocre strikeout and walk numbers deteriorate. Grade: D+

Tom Koehler: Koehler is better as a reliever than a starter, and the faster the Marlins figure that out, the better. Grade: C

Steve Cishek: Cishek has been better as of late and should be well on his way to at least a one-win season, if not more. If the Marlins get more leads, he should be able to pitch more often and show off his fastball/slide skills to suitors in the offseason. Grade: B+

Mike Dunn: Dunn should stay on the Marlins as well, and if he can keep the home runs to a minimum, he should be an acceptable eighth inning option. Unfortunately, his walk issues are still there and his strikeouts are down. Grade: C+

A.J. Ramos: Ramos has electric strikeout stuff, but he too lacks control. His issues are akin to Dunn's in that he needs to tone down the walks and avoid home runs to make his skills valuable. Grade: C+

Chad Qualls: Qualls is a veteran reliever with not much time left on his effectiveness, but at least he put some of it to good use this year for the Fish. But for a guy who owns a 66.4 percent ground ball rate, he sure gives up a lot of homers. Grade: C