The Miami Marlins avoid the three-game sweep and break up a five-game losing streak with a 6-2 win that came on the back of a strong start by Jacob Turner and some early offense.

The Miami Marlins jumped out to a rare early lead in this game, and it ultimately gave the team the 6-2 victory over the Atlanta Braves. The Marlins' first three hitters took the initiative and got things going, as Justin Ruggiano led the game off with a walk and Ed Lucas followed with a single. Giancarlo Stanton followed up with a two-run double to start off a four-run first inning. Even the batless Placido Polanco found some life today, as he hit a double to drive in another run that inning. Eater of worlds Jeff Mathis singled in a run as well, allowing the Fish to bat around in the first.

That proved to be enough for Jacob Turner, who put up another strong outing in his decent 2013 campaign. After the young righty struggled so mightily in Triple-A, it is good to see him earning some strikeouts. He struck out five batters in seven innings again today, while surrendering three walks. The strikeouts and whiff counts were once again encouraging, as Turner induced 11 swings and misses in 110 pitches. But his pitch locations were better today as well, particularly in terms of working lower in the strike zone. 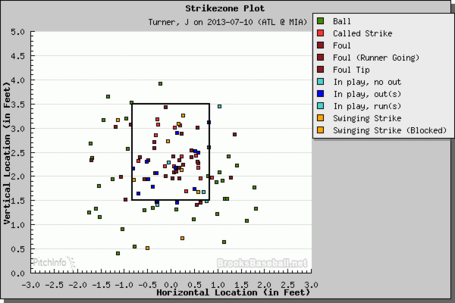 Turner is still benefiting from his defense behind him in terms of hit prevention, and it helped that he performed well defensively this afternoon by picking off B.J. Upton (again) at first base. But so far in 2013, his starts have been promising, and it looks as though he may have fixed his earlier issues on the mound.

The Marlins snap a five-game losing streak and avoid a sixth straight loss with the win. They will be off on Thursday before starting a three-game series versus the Washington Nationals Friday night.