My fellow Americans, our long national nightmare is over... Our great team has a first basemen; the Marlins no longer have to play Greg Dobbs every day. Logan Morrison has returned to the fold.

Under the Dobbs Administration, Miami became baseball's losingest team. Fans grew accustomed to a culture of corruption, double plays, and soul-crushing losses. Every Dobbs plate appearance against a left-handed pitcher became a microcosm of the season -- an existential crisis in which I wondered if baseball could only bring me anguish.

Out with the old, in with new. Morrison rode into New York atop a white stallion, wielding a bat of righteousness. He reached base three times, helping to slay the fearsome 23-35 Mets. Cue joyous celebration.

A small part of me expected the Marlins and Mets to cancel today's game. I thought they might declare a truce after yesterday's unexpected double-header, and perhaps hibernate through the rest of the weekend. Instead, the Fish took the field this afternoon to play another extra-innings game against New York.

I have a whole scene plotted out in my head, where Redmond took Koehler aside and threatened to have him summarily executed if he didn't spare the bullpen from pitching more than two innings today. No pretense of a fair trial, just a swift death.

He actually pitched quite well following this encounter, generating ground-out after ground-out. Nine straight Mets batters failed to hit the baseball past the infield. 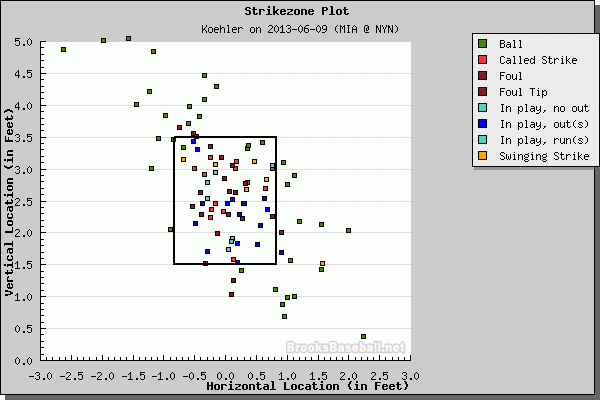 Koehler didn't receive many swinging-strikes, but he stayed in the strike-zone and let the Mets put the ball in play. Most of the time this approach will yield outs, while other times David Wright will smash a two-run double. The rest of the Mets offense is such a black hole that one can just shrug at this and move on.

How Adeiny Hechavarria came away with the highest win probability added (WPA) of the day remains one of the great unexplained mysteries of the universe, along with the existence of dark energy. I expect the Royal Swedish Academy of Sciences will award its Nobel Prize in Physics to the man or woman who discovers how a run-scoring single and reaching on an error outclass the game-tying home run hit by Derek Dietrich.

If someone had told me two months ago that Derek Dietrich would have five times as many home runs as Marcell Ozuna, I would have passionately lobbied for a court order to have them committed to a psychiatric institute.

Dietrich was not the only Marlins player to homer today. Two players hit a home run. Yes, home runs. As in the plural of 'home run.' More than one home run. O, en español: dos jonrones.

Miguel Olivo capped off the Marlins' run spree with a two-run shot in the tenth inning. Baseball Reference claims the Marlins have scored more than seven runs six times this season. I must have mentally blocked all of that out, because I can only remember the 14-2 win against Philadelphia.

Enjoy the rest of your evening.