The Miami Marlins stayed close despite a subpar start from Jacob Turner, but one ugly inning from A.J. Ramos led the Fish to a 6-1 loss and a sweep at the hands of the Philadelphia Phillies.

The Fish surrendered an early run at the hands of an Eric Kratz double, but the team quickly climbed back just one inning later. Derek Dietrich lined a 0-1 pitch from Cole Hamels over right field for a solo home run in the fourth inning to tie the game up. The Fish and Phillies found themselves once again deadlocked after a small bit of early offense.

Today's starting pitcher, Jacob Turner, had a subpar outing compared to his previous start. Like his previous start, he made a lot of hitters swing and miss, garnering 12 whiffs in 101 pitches. That translates to a rate of 11.9 percent. Of course, he was also all over the strike zone. He threw 41 balls versus 13 called strikes, a horrific ratio of 3.2. 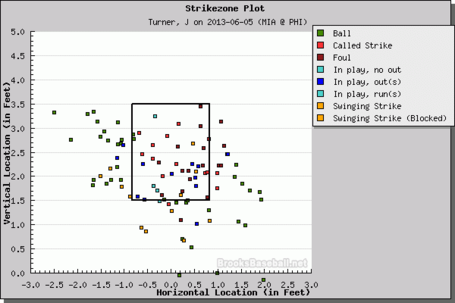 The result was that, despite the elite whiff rates, Turner managed just four strikeouts and also walked four. In the process, he further debunked the myth of him as a control pitcher.

A.J. Ramos is no control pitcher, but he got in trouble in the seventh inning thanks to a number of hits. Ramos gave up five hits in the seventh, including a triple from Ryan Howard (!) and another home run to Domonic Brown. In total, five of the Phillies' six runs came off of Ramos, who took the loss.

Meanwhile, the Marlins' offense failed to deliver aside from Dietrich's homer. The Fish managed just four other hits, only one of them going for extra bases, as the Marlins went meekly in the finale of the three-game sweep, 6-1.