The First-Year Player Draft airs this Thursday night, and you should pay attention. It may not excite or trill you, but it will determine the future of the Miami Marlins franchise.

Whereas the NFL and NBA drafts attract considerable fanfare, Major League Baseball's draft receives relatively little attention. Most of the players are unknown to the general public, and it often takes years before players reach the major leagues. Despite the disconnect between baseball fans and the draft, the player whom the Marlins choose sixth overall represents the most important decision that they will make this year.

Let's examine their draft history, as well as what their strategy could be and should be for tomorrow's draft.

The Marlins will once again place their faith in Scouting Director Stan Meek, who has run their drafts since 2001. Meek has demonstrated a clear preference for high school talent over the years.

Meek has been the subject of criticism for drafting high-profile busts, most notably Kyle Skipworth and Chad James. The acquisition of Christian Yelich and Jose Fernandez, in addition to second round pick Giancarlo Stanton, have helped to repair his image.

The Marlins have a long track record of spending as little money as possible in the draft too. Major league teams spent an average of $6.3 million on players from 2007 to 2011. During that same five year period, the Marlins spent an average of $4.3 million. The Washington Nationals invested more than twice as much, spending $10.2 million per year.

The revision to the collective bargaining agreement two years ago dramatically altered the landscape of the draft. The players' union and the owners successfully reigned in spending on amateur talent, installing harsh penalties for teams that sign players above the recommended slot values.

Under the old system, teams such as the Pittsburgh Pirates would target talented, but difficult-to-sign players like Josh Bell or Stetson Allie in the second round and later. A few extra million spent in the draft potentially offered many more quality prospects.

Last year, teams changed their strategy to fit the new restrictions. They aggressively went after cheap college seniors between rounds six and 10, allowing them redirect the savings to high school players in the late rounds.

2013 MLB Draft: Mock drafts from around the Internet 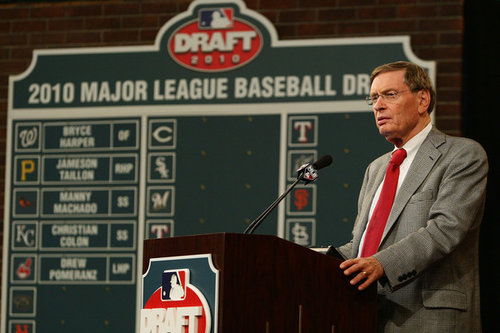 The new rules allotted every team a maximum bonus pool, and stipulated that any unsigned player in the first 10 rounds would reduce the pool. The willingness of every player to sign them became paramount. If a team took a risk on a high school player before and ultimately failed to sign him, they could spend that money on another tough sign. This is no longer case.

Where do these changes leave the Marlins? They have a stronger incentive to go after college players, who are usually guaranteed to sign. If they sign for under the assigned pick value, then the team can sign riskier prep players later.

The Marlins went for a cheaper college arm last year, signing Andrew Heaney for less than the assigned pick value. Many expect that they will target a college player again, with a preference for a position player. Stan Meek may have a track record of picking prep players, but rumors suggest that owner Jeffrey Loria wants a player that can rise through the system quickly. North Carolina third basemen Colin Moran and Nevada right-hander Braden Shipley both fit that bill.

Who Will the Marlins Draft?

They will draft a baseball player. Beyond that bit of poignant insight, I can't make a useful prediction. We may have some idea of who know the front office prefers, but the draft never unfolds according to plan. Last year, the Houston Astros shook up the draft by eschewing the best player available, Stanford ace Mark Appel. They might shock everyone again, and take Colin Moran first overall, as some have predicted.

Appel, Oklahoma right-hander Jonathan Gray, and San Diego outfielder Kris Bryant are unlikely to be available when the Marlins make their first round selection. I believe they are the premiere talents in this year's class, as no one else has their elite combination of tools and polish.

The next tier of players include Kohl Stewart, Braden Shipley, Colin Moran, Clint Frazier, Austin Meadows, and Trey Ball. Each of them either lacks the ceiling of Gray, Bryant, and Appel, or needs more time to refine their tools.

The good news is that all of them are exceptional prospects, and at least three will be available when the Marlins' turn comes around.

There is also the possibility that the Marlins take someone outside that group, possibly because they have a special fondness for someone, or because they wish to save money. Potential names include Reese McGuire, Ryne Stanek, D.J. Peterson, and Hunter Renfroe.

In this fictitious universe where I replace Stan Meek, and am not subject to the whims of Jeffrey Loria, I would have my eyes set on St. Pius X right-hander Kohl Stewart. Stewart may have the highest upside of any pitcher in the draft, demonstrating an advanced feel for three pitches, and possessing terrific athleticism.

He won't reach the majors quickly, but he's one of the few arms with the potential to become a front-line starter. The Marlins aren't close to contending, so drafting a player who can rise through the system in a year is less important.

There are no guarantees that Stewart will be available when the Marlins draft, however. The Minnesota Twins desperately lack pitching in their minors, and they will be very interested in Stewart with the fourth overall pick.

I am also a big fan of Colin Moran. He should stick at third base in professional baseball, and his bat is fantastic. He doesn't have the raw power tools of some of his peers, but he will reach base so frequently that it won't matter. I find that scouts often overlook plate discipline as a tool. It's ultimately a massive component of a prospect's success or failure, and Moran comes packaged with superb plate discipline.

Beyond Stewart and Moran, I would look to draft Clint Frazier, and then perhaps Braden Shipley.

The First-Year Player Draft will be aired live on MLB.com this Thursday at 7:00 PM EST. Stay tuned for on-going coverage of the draft on Fish Stripes.