The Miami Marlins did not get a strong start from Nathan Eovaldi, and Chad Qualls gave up their early lead against the San Diego Padres. But all of that was erased in the ninth inning with one swing by Jeff Mathis.

The Miami Marlins got the worst start so far of this season from Nathan Eovaldi. Against the San Diego Padres, Eovaldi was significantly worse than in his previous two outings, and it started with his velocity. Whereas in previous outings, he was averaging more than 97 mph on his fastball. Today, that speed was down to around 96 mph, which is closer to 1.5 mph less than his season average. As a result, the fastball was not as effective, and hitters never once swung through the pitch. Eovaldi's only two swings and misses were off of his sliders.

His pitches were also a little more wild than before. 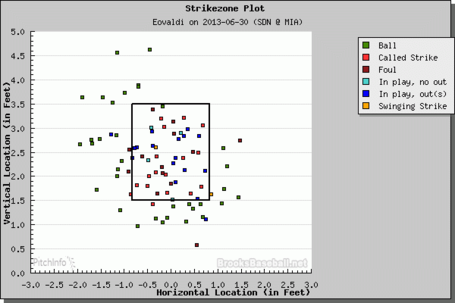 As a result of his lack of control, Eovaldi threw no strikeouts and three walks on the day in six innings. It took some strong defense by the Fish to hold off the Padres, who lined out and hit balls decently, only to land in gloves. The Padres' only chance at a run against Eovaldi came in the fourth inning, when they loaded the bases with two outs against him off of two singles and a walk. Pedro Ciriaco hit a 2-0 inside pitch on the ground for an easy force-out to end the inning.

The Marlins' offense was not necessarily strong either, but a couple of two-out bloop singles and a Derek Dietrich double did have them ahead 2-0 before Chad Qualls gave up a two-run pinch-hit homer to Carlos Quentin. It came down to the ninth inning and Padres reliever Tyson Ross. Ross quickly ran into a situation with a walk to Logan Morrison and a single by Marcell Ozuna. Dietrich hit a long fly ball that moved Morrison to third, and the Padres decided to intentionally walk pinch-hitter Greg Dobbs.

That brought Jeff Mathis to the plate. Mathis was 0-for-3 prior to that appearance and was hitting .121/.188/.159 this season and .195/.253/.312 for his career. The Fish had Rob Brantly, a lefty hitter, on the bench who could face the righty Ross. Instead, Mike Redmond went with Mathis, and surprisingly, it paid off. Mathis took a fastball out to the bullpen in left field and hit his second homer of the year, this time in grand slam walk-off fashion.

The Marlins will look to finish the series win tomorrow night with Jose Fernandez on the mound.