Miami Marlins starter Jacob Turner climbed through the minors on the reputation of a control pitcher, but has he turned into a whiff-inducer instead?

Over the weekend, the Miami Marlins swept the New York Mets, and they did it with a complete performance from both the pitching staff (two runs allowed in the first two games) and the offense (24 runs scored in the series). One of the bright spots of the series was Jacob Turner, who made a triumphant return in the Marlins' 5-1 win in the first game of the series. Turner shut out the Mets in seven innings, striking out three batters while walking just one.

On the outside, it looks like Turner put in a typical performance for himself, given his reputation as a control pitcher. He did not strike out a lot of batters, but he also suppressed the walk count. But when you look a little deeper, the story sounds completely different. Turner induced 10 swings and misses in just 81 pitches, which translates into a 12.3 percent swinging strike rate. This is far higher than what might be expected from a pitcher who was struggling with a 14.5 percent strikeout rate in Triple-A this season.

It turns out, however, that Turner's swinging strike rate has been up in the minors all year as well. As we pointed out earlier in our discussion of Turner's strikeout problems, it appears as though he has not been struggling in this department at all, which is not in concert with his dipping strikeout rates.

So if Turner is not failing to get whiffs on hitters, why is he struggling to strikeouts? In the linked article, I pointed out a potential problem in Turner's game akin to the very issue that plagued the man he replaced in the rotation, Alex Sanabia.

The reason Sanabia has struggled this season has come down to his problems with control, as he has thrown a lot of balls this season to downgrade the impact of his swinging strikes. This is especially evident versus lefties; take a look at how Sanabia has thrown his fastball to left-handers this season. 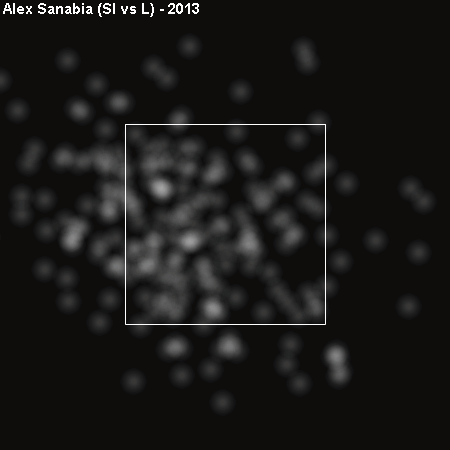 The above issue is fairly clear; Sanabia has some extreme difficulties locating his pitches in the zone, particularly against lefty batters. The loss of called strikes has gotten in the way of his swinging strikes, thus downgrading Sanabia's strikeout rate down to 12.4 percent despite a 9.9 percent swinging strike rate.

Sure enough, Turner's pitch location chart from the Mets start shows a very eerie similarity to the sort of performance Sanabia might put up. 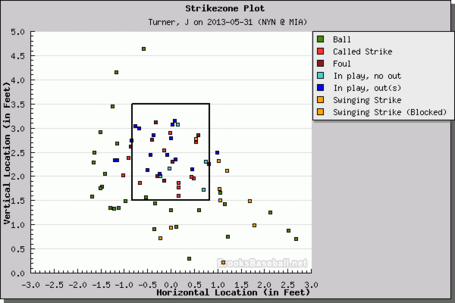 By visual count, it appears as though Turner only threw 36 of his 81 pitches thrown in the designated strike zone. He threw just 11 called strikes versus 30 balls on his pitches overall. For a guy whose reputation was that of a control pitcher who would limit walks and keep his team in the game, this is the exact opposite performance than expected.

Based on Brooks Baseball's pitch classifications, Turner's major problem in the last game in terms of location was with his two-seam fastball. He threw 25 of those pitches, and 48 percent of them went for balls while only 12 percent went for called strikes, yielding a four-to-one ratio. His curveball also fared poorly in a smaller sample of pitches, yielding a three-to-one mark.

All of these results are strange because they go completely against what Turner represented when he first arrived with the Marlins. Even with his performance from last season, Marlins fans still had the inclination that he was a control pitcher who would struggle to find stirkeouts. Before the season, I looked through Turner's Pitch F/X numbers and wrote a scouting report on him, and most of the details I noted fit with his control profile. The most significant indicator of that was that Turner was able to locate his fastball well and pound it in the strike zone to the tune of a 1.5-to-one balls-to-called-strike ratio.

However, some of the numbers did indicate the possibility of Turner being different than what we expected. The lack of his ability to place his supposedly "plus-plus" curveball in the strike zone was alarming; his curveball balls-to-called-strike ratio was at 3.9 last year. The curveball is typically a pitch used to get a mix of called strikes and whiffs, but Turner's profiled more like a typical slider than a curve. His newly-developed slider quickly became a decent out pitch as well. His changeup, touted as a decent pitch, was actually a complete mess and poorly located. Overall, last season he located his pitches in the zone only 47.4 percent of the time, a rate that would have ranked next to strikeout artists (and occasional control problem guys) like Gio Gonzalez and Johnny Cueto rather than typical control guys.

Of course, it is just one game, and it was against a Mets lineup that has clear holes surrounding David Wright. But given Turner's still-confusing problems with the strikeout and his gradual rise in swings-and-misses, could we be witnessing a change in the type of pitcher Turner is? Could he have, by accident, developed into a wild thrower with strong strikeout stuff rather than a strike-pounding control guy. If indeed this is the case, it would be highly unexpected given the deterioration of Turner's fastball from a mid-90's offering to a low-90's two-seamer pitch. One would expect him to be more of a control type once injuries and other factors ate into his velocity, but it seems he has gone the other direction in spite of his strikeout numbers.

And this may actually be a good thing. It is certainly possible that the reason why Turner is getting more swings and misses is precisely because he is working more out of the zone, but if he can learn to harness both his reputation of good location and his newly-found whiff potential, he can become an even better pitcher. It is difficult for pitchers to learn swing-and-miss stuff, but working with pitching coaches can assist a young starter in learning how to control his pitches and better locate them. Once he gets more pitches in the strike zone, those swings and misses will make him a terrific two-way starter rather than someone with inconsistent strikeout results.

This development in Jacob Turner may be a hidden treasure. Of course, it could always go the other way, and Turner can become yet another in the long line of pitches who, like Alex Sanabia, cannot find a way to get whiffs and called strikes and remains on the outside of the majors looking in. But with Turner's past pedigree, the Marlins should give him a chance to work out his kinks in the majors. The performance thus far is encouraging.