Ricky Nolasco has been the subject of many trade rumors in the last few days, but has he really improved? Has a shift on the mound helped him rebound as a pitcher? Let's take a look at his Pitch F/X scouting report for this season.

Ricky Nolasco has been in countless trade rumors, the latest of which involving the Los Angeles Dodgers having a deal almost complete for the right-hander. We even discussed a potential trade return for Nolasco from the Dodgers.

But lost in all of this is the question of Nolasco's effectiveness. He is scheduled to start tonight against the San Diego Padres, and if word does not come out soon, there is a very good chance he will make that start tonight. Nolasco has been on the comeback trail, and he has been better than the Marlins than they could ever have expected. Nolasco's 3.68 ERA and 3.54 FIP have him on pace for the first acceptable season (depending on how you measure your pitching Wins Above Replacement) since 2008, and that just happens to coincide with his busiest trade deadline.

But has Nolasco done anything to make himself better? Jeff Sullivan of FanGraphs points out something interesting that went previously unnoticed.

He’s moved over on the mound, and if the PITCHf/x data is to be believed, it’s like this all the time now. Nolasco’s right arm is still closer to third base than first base, but the gap’s been reduced, giving hitters a different look and potentially allowing Nolasco to work the zone differently. One can imagine this somewhat leveling out his previous platoon split, not entirely, but partially.

This could be a significant change for Nolasco, and perhaps play a big role in why he is pitching so much better. Sullivan mentions that this subtle shift (which you can see in pictures from before and after the switch, courtesy of FanGraphs) occurred in late August, so it may be visible in his September stats from last season. Sure enough, Nolasco posted his second best strikeout rate of the season that month (16.4 percent) and the lowest walk rate of the year (2.1 percent), leading to a 2.85 FIP and 3.00 ERA.

How have these changes affected his pitches? Let's examine his Pitch F/X numbers this season and compare them to what he has done from 2011 to 2012, numbers which we picked up from our last Pitch F/X scouting report on Nolasco.

We can start by checking out the basic numbers. Here is what we found via Brooks Baseball's Pitch F/X cards about Nolasco in 2011 to 2012.

He threw a varied mix of fastballs, sliders, curves, and splitters, with the knowledge that his secondary stuff was significantly better than his weak fastball.

How does that compare to this season?

I do not see any large differences between his usage this season and last year. He has dropped his fastball use and upped his breaking pitches a little since the last two seasons, but this may be a product of simply getting more early strikes than before. Having said that, Nolasco's first-strike percentage according to BIS data is actually down this season.

Overall, the changes we see in the choice of his arsenal seem mild at best, so the difference is perhaps in the pitch effectiveness.

Here were the metrics we often analyze in terms of pitch performance for 2011 and 2012.

Before, we noted that Nolasco's change to an increase in two-seam fastballs has naturally upped his grounders but also decreased the swings and misses on his fastballs.

What about this season?

What can we garner from the difference in these two numbers? The first thing we see is that Nolasco is getting fewer ground balls than last season. Part of that is the small decrease in fastballs, but the usage of the two-seam fastball has actually gone up this year. The other aspect of it could be that the two-seamer just is not getting as many grounders this year as it was before.

The biggest difference, however, in the numbers shown above is the extreme control that Nolasco is showing. It is interesting that he is boasting his highest walk rate since his rookie year this season, because Nolasco is actually placing his pitches better in the zone than ever before. Whatever elemental changes that he has made, perhaps even the switch to a more first-base position, has made him have an easier time placing his slider, curveball, and splitter in the strike zone. Each of those pitches have landed for as many balls as called strikes, which is an insane number. Remember, good control implies at least a two-to-one ratio, so these pitches have landed in the zone in an extreme fashion.

This is perhaps the best reason for the bounceback in strikeouts in 2013. Nolasco is getting what seems like a lot more called strikes, and that is turning into more called strikeouts. Indeed, his rate of strikeouts on called strikes has increased from 18 percent last season to 22 percent this year. In addition, aside from the spectacular early-season performance of his splitter, the whiff rates on his pitches have remained pretty similar as well. Nolasco has hit a 9.2 percent swinging strike rate, more than his 8.5 percent from last season but only matching his career average and not exceeding it like he did in 2009 and 2010. 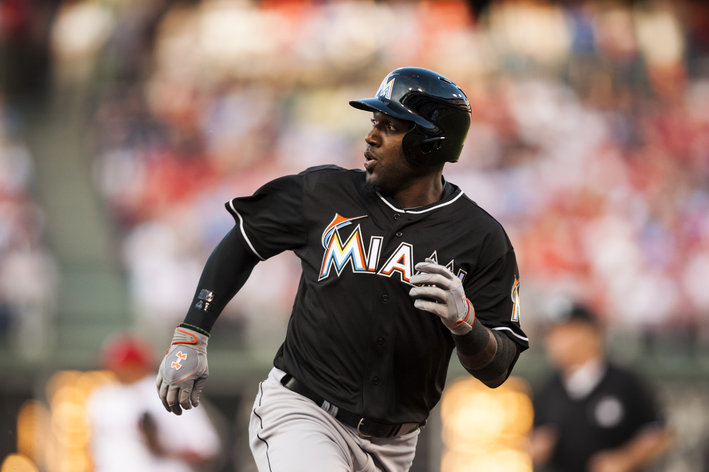 The race for the Miami Marlins' sole representative at the 2013 MLB All-Star Game continues, as Jose Fernandez and Giancarlo Stanton duke it out while Marcell ozuna begins to heat up.

We know that Nolasco has used his breaking pitches more often, and that he has placed them better in the strike zone. Could it be that he is using them to get the very first-pitch strikes that he needs to succeed. Last season, Nolasco threw a fastball-type pitch to righties in 55 percent of his first pitches. That number has dropped to 49 percent this year, with his slider jumping up from 33 percent to 41 percent on first pitches this season. Last year, he did a good job placing the slider in the zone, but this year, he has been even better, and maybe that has led to his 27-point difference in wOBA (.300 last season, .273 this year) between 2012 and 2013.

The story of Nolasco's 2013 season seems tied to an increase in called strikes, and any improvement in that category should help teams alleviate their fears about his play. He has at least one tangible explanation in the shift on the pitching rubber, and the results so far have shown more called strikes than ever and a slight bounceback in swinging strikes. The downside is that it has cost him ground balls, but that does not seem to have significantly effected his slugging percentage on contact, which appears quite similar to last year.

As we did with other Pitch F/X scouting reports, we will grade Nolasco's pitches to see how well they have played this year.

Four-seam fastball (35): Nolasco's worst pitch is his four-seamer, and he has grown increasingly aware of this. This season's usage of the pitch is at its lowest of his career, as he now depends more and more on breaking pitches and a two-seam fastball.

Two-seam fastball (45): The two-seamer has actually gotten weaker since last season, and that might be in part due to its increased usage. Perhaps Nolasco has not mastered the pitch yet, as it has been in the works in the last two-plus seasons.

Slider (60): The slider has increased in effectiveness to an insane point. Not only is it getting whiffs at a normal rate for an out pitch, but Nolasco has also placed it in the strike zone at an incredible pace. It is a shame he cannot throw the slider every time, because it has far and away been his best pitch, but now that he has had confidence in putting it in the strike zone, he has been able to even use it on first pitches to good effect.

Curveball (55): The curve is at the same effectiveness as it was last season, as Nolasco has proven that he can get strikes of the called and swinging variety.

Splitter (45): The splitter appears improved this season, but the pitch last season was simply ineffective and was nor featured in a positive fashion. It was a good out pitch last year and it features good movement, but this year it has been Nolasco's strike-pounding capabilities that have made it closer to an average pitch.

Given some of these changes, Nolasco may indeed be a good addition to some team this trade deadline. The question of who is more interesting at this point, but Nolasco would definitely be a benefit to any team just as Sullivan said:

Last year, with Ricky Nolasco, it was buyer beware. Now, he’s a guy worth getting, because he’s a better starter than at least one guy in virtually every big-league rotation. Every little gain helps. There are some mighty tight divisions.

Indeed, I look forward to seeing how Nolasco fits elsewhere.