The Miami Marlins put up enough offense against Kevin Correia and the Minnesota Twins to cover for a mediocre outing by Jose Fernandez. Derek Dietrich homered and Marcell Ozuna drove in two to key the Fish to a 4-2 win.

Jose Fernandez and the Miami Marlins figured to be in a tight pitching matchup, but it turns out that Fernandez was not nearly as sharp as he should have been. He struck out three and walked three in five innings, but the three he struck out included eighth hitter Pedro Florimon and the pitcher. He only got seven whiffs in 94 pitches and was missing the strike zone significantly. 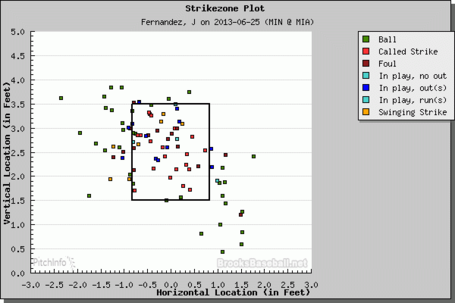 Fernandez did throw 35 balls versus 20 called strikes, yielding a respectable balls-to-called-strike ratio of 1.8, but he was beat here and there when he strayed significantly into the zone. While the Twins never broke him, he needed the defense's help to get out of innings and thus racked up his pitch count.

Luckily for Fernandez, the Marlins' offense had his back. After going down early 1-0, the Fish bounced back late in Kevin Correia's start. The Marlins picked up a 2-1 lead in the sixth inning thanks to Ed Lucas, Giancarlo Stanton, and Logan Morrison loading the bases for Marcell Ozuna, who delivered two with just one out.

The Fish tacked on some insurance in the eighth inning with Ozuna doubling home Morrison. Morrison had a single and a double and continues his path back to being an important member of this team.

Steve Cishek notched an uneventful ninth inning for his 13th save of the season, and the Marlins have won their 13th game in a surprising June.