The Miami Marlins have a few trade rumors swirling around them, and they primarily involve Ricky Nolasco and the team's bullpen pitchers, including Ryan Webb, Steve Cishek. Chad Qualls, and Mike Dunn.

The Miami Marlins are likely going to be active members of the 2013 MLB trade deadline, and pitching seems like the prime component of the team's involvement. There have been multiple rumors regarding Ricky Nolasco floating around, and the Marlins are definitely fielding offers on players on the team. These other players, for the most part, have been relievers, as names such as Steve Cishek, Ryan Webb, Chad Qualls, and Mike Dunn have all been thrown around as trade bait in this year's trade deadline.

For Nolasco, the rumors have been heading west, as multiple NL West teams seem to have some interest in the native Californian. The first team that came up in the discussion is the San Francisco Giants, against whom Nolasco has performed well in limited starts in his career. Peter Gammons of MLB.com mentioned in a recent tweet that Nolasco to the Giants is a trade rumor du jour.

As we discussed earlier, if the Marlins are willing to eat most of Nolasco's salary, they may be able to get a passable prospect back whom they can add to their bevy of minor league talent. The Fish do not often take on salary, but if there is a chance the team can get a legitimate prospect, they should shell out some of the money they committed to by keeping Nolasco around this season.

The Giants and the NL West are not the only teams and locations to which Nolasco is rumored to go. Andy Martino of the New York Daily News reports that the New York Mets, inexplicably, were interested in Nolasco before.

-- The Marlins, known to be willing to move Ricky Nolasco, are also "being very aggressive, calling everybody about their pitchers," according to one NL official. A separate source said that the Mets and Marlins briefly batted around Nolasco’s name in February, during the preliminary chats regarding Giancarlo Stanton that we reported on back in April. "They are desperate to move Nolasco," the source said.

The Mets were known rebuilders coming into this season, but they are definitely not interested in Nolasco now with the pitcher heading to free agency shortly.

As for the rest of the Marlins on the trade block, a number of Marlins relievers are potentially available at the deadline. Headlining the group is Steve Cishek, who is garnering interest from teams like the Boston Red Sox and Detroit Tigers, two teams with playoff aspirations and weak closing situations. Cishek, however, is the player the Fish would most like to hold onto among the four available relievers, so the team may have to be blown away to accept an offer.

The other relievers have limited closing experience but could be used as mid- to late-bullpen options. The most likely candidate to be dealt is Ryan Webb, who will be entering his second season of arbitration next year. Webb has struggled since arriving in Florida in the Cameron Maybin trade, and his ground ball rate, previously his trademark, has dropped precipitously since that trade. if the Fish get anything for him, the team would be happy.

The same goes for Chad Qualls, who was a free agent signing this offseason and was expected to be sent away if he provided any good innings. If the Marlins can get something for either of those players, it would be a net positive. 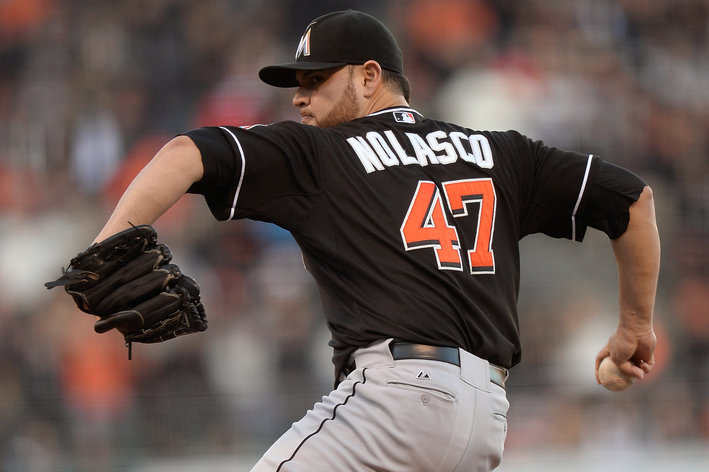 The Miami Marlins discussed a trade involving Ricky Nolasco and the Colorado Rockies, but money remained an obstacle. The Fish have potential trade partners in the Giants and Diamondbacks as well.

Mike Dunn holds some residual value despite his multiple-season struggles on the mound. He has a 2.97 ERA and 3.53 FIP this season, but he has lost a few strikeouts and still walked a similar number of batters this season. He has also increased his ground ball rate, but it is anyone's guess where Dunn's career goes from here with his tools and lack of control.

All four of the relievers have a chance of leaving, since they all are either expendable or will be expensive next season. Cishek holds the most value with his "closer experience," so do not rule out the Marlins dealing him, especially if he simply treads water rather than elevating his play. Ryan Webb is already on his way out, as is Nolasco. The trade deadline looks to be full of Marlins pitchers making various amounts of impact this season.