Nathan Eovaldi recently made his return to the majors last week, and he came with new, scary toy: a much-improved, high-velocity fastball.

Share All sharing options for: Nathan Eovaldi and his new, scary fastball

Last season, the Miami Marlins acquired Nathan Eovaldi from the Los Angeles Dodgers in the trade for Hanley Ramirez. For the Fish, it was an attempt to get something out of the value sink that was Ramirez, as his quick decline left the Fish with a difficult situation. Still, Eovaldi was a top-100 prospect and a right-hander with a fiery fastball, so he held promise.

Unfortunately, that was most of what Eovaldi had. The fastball was very good, and his slider was a growing pitch, but he had very little outside of those tools available to him. Before the season, I labeled Eovaldi a key to success in 2013 but mentioned that his primary obstacle would be the development of his secondary pitches, particularly his changeup or curveball against left-handed hitters. His fastball, which I graded at a 50 in his Pitch F/X scouting report, was his highlight. In particular, it was the fastball's velocity that made it effective; among pitchers with at least 100 innings in 2012, Eovaldi's fastball ranked as the ninth-fastest in the game at 94.1 mph, right alongside Matt Moore and Max Scherzer.

Eovaldi's return to the rotation has been a welcome sight, but this Eovaldi has certainly changed. The biggest difference? Well, it's plain to see (charts provided by BrooksBaseball):

It is only two starts, so it could very well be a complete fluky set of events, but through 116 fastballs (117 if you count the lone sinker), Nathan Eovaldi's fastball velocity has jumped to 97.5 mph. That kind of sustained velocity is simply unheard of in the league. Consider that, since 2010, the qualified league leader among starting pitchers was Stephen Strasburg at an amazing 96 mph per fastball. Other players who follow Strasburg on that list include David Price (95.1 mph), Justin Verlander (94.9), and Edwin Jackson (93.9). Through two starts, Eovaldi has blown those guys out of the water, averaging a full one mph more than Strasburg has over the last few seasons.

And it is not as though Eovaldi has been gassing his fastball in the triple-digits and fading away as the game progresses. Take a look at the velocity chart he put up in his stellar performance versus the San Francisco Giants.

Eovaldi started off the outing with a 97.8 mph fastball and he finished it off with a fastball at 95.6 mph. Looking at that velocity chart you can see that the fastball essentially fell two miles per hour over the course of the outing, but if you look at just the fastballs, it is easy to tell that the velocity vacillated around 97 mph and stayed up above it until the last three fastballs. 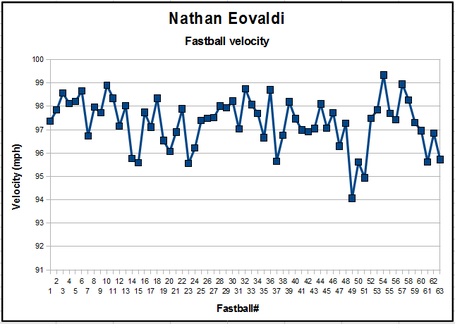 The situation was very similar in his start versus the Arizona Diamondbacks as well. But how has this change in velocity affected the effectiveness of Eovaldi's fastball? We can also compare their early statistics from this season to the ones we saw last year.

Again, the situation is just two starts in, but you can see a marked improvement in Eovaldi's fastball performance. The usage rates have gone up a little this season, as he used a fastball-like pitch in 62 percent of pitches last year, whereas he is using the fastball on 68 percent of tosses this year. So far this year, most of that difference has come from a drop in changeup use, as Eovaldi has focused more on improving his curveball rather than his changeup so far this season.

But everything else about fastball has improved significantly. He is safely placing more pitches into the strike zone than he did even last season, when Eovaldi already displayed strong control over the pitch. The difference now is that he is getting even more swings and misses, upping the percentage of whiffs per swing by four percent. This has occurred despite the essentially equal number of swings on the pitch. Hitters are just failing to catch up to his improved heat.

What does this mean for Eovaldi? If he can keep up something like this performance, there is surefire proof that this increase in velocity will yield real results in his run prevention. Analyst Mike Fast, now with the Houston Astros organization, showed that fastball velocity is linearly related to ERA. The effect is to the tune of 0.2 to 0.3 runs per one mph added to the fastball. This means that, if Eovaldi maintained a similar style of pitching from last season (4.30 ERA, 4.15 FIP), he could drop his ERA around 0.6 to 0.9 runs based on how much more effective he would be with a faster pitch. Even without improvement on his secondary stuff, a three-mph difference on his fastball would be expected to shave around three-quarters of a run off of his previous marks. Such an improvement could leave Eovaldi at an expected ERA of around 3.60.

Two starts is not yet enough time to tell whether he can keep up the performance, but it is evident that the improvement in velocity has so far been successful for Eovaldi. If he can maintain an elite velocity like the one he showed off in the last two starts, the Marlins could be dealing with a vastly improved pitcher than the one they saw last year. If that is the case, every Eovaldi start is now must-see television for Miami Marlins fans.