The Miami Marlins jumped out to an early lead against the San Francisco Giants thanks to Justin Ruggiano's first inning homer and the performance of Nathan Eovaldi. They won thanks to two more homers, including a second by Ruggiano.

The Miami Marlins weathered a difficult game versus the San Francisco Giants, though the final score does not necessarily indicate that. After a leadoff home run by Justin Ruggiano, the game settled into a pitching duel between Nathan Eovaldi and Matt Cain. After the home run, Cain settled down and struck out eight Marlins batters along the way. However, he did give up two more runs to the Fish, including one on an error by first baseman Brandon Belt.

But Nathan Eovaldi stepped up and outdid Cain just a bit with what might have been his best start in the majors. Eovaldi went seven innings and struck out seven batters while walking just one all day. He induced eight whiffs in 86 pitches on the day, but the more impressive aspect of his game was his strong work in the strike zone. 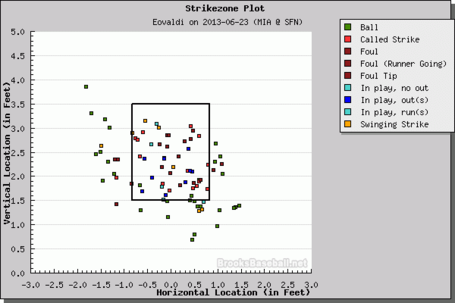 Eovaldi threw 31 balls and 17 called strikes, yielding an impressive 1.8 balls-to-called-strike ratio that would have been unheard of from the erratic Eovaldi of last year.

But perhaps most important about Eovaldi was his fastball velocity. For the second game in a row, his fastball was humming at an average velocity of 97.2 mph. That is insane.

If the Marlins just had Eovaldi's strong performance, it may have been enough, but the Fish capped the game with a five-run ninth inning. The run spree was highlighted by two home runs. The first garnered the Marlins some insurance runs, as the team had just a 3-2 lead heading into Marcell Ozuna's plate appearance. Ozuna responded by turning on a fastball inside by Giants reliever Jean Machi en route to a light-tower power homer that hit the left field foul pole. The second came with the Marlins up 5-2 and a runner on second for Justin Ruggiano, who hit his second homer and 11th of the season to finish the game.

The Fish take three of four games versus the defending champion Giants and move on to a home series versus the Minnesota Twins.