ESPN.com's David Schoenfield thinks the Pittsburgh Pirates are the latest suitor for the services of Giancarlo Stanton. Would the Marlins pull off a trade this season?

Every time you hear a trade rumor regarding the Miami Marlins, there is a very good chance that Giancarlo Stanton will be involved. The honest truth is that Stanton is a spectacular player with a deadline in Miami, as the Fish are almost certainly going to trade him, regardless of the fan's wishes. At some point in the next year or two, Stanton will no longer be a Miami Marlins player, and it will be a frustrating day for us all.

ESPN.com's David Schoenfield is the latest to match a location to Stanton, and he thinks the Pittsburgh Pirates are a perfect fit.

From the Pirates’ perspective, the best thing is that Stanton is making only $537,000 this season, so he fits into their budget. Sure, he’ll get expensive starting next year when he first becomes arbitration-eligible, but that’s the thing about acquiring him: You get him for three more seasons after this one. This isn’t renting Zack Greinke for two months. And if Stanton gets too expensive for your tastes by 2016, you can always trade him then. All the Pirates have to do is cough up some prospects. Premium prospects, of course. But I say: Take the plunge. Heck, acquire Stanton to play in the most beautiful ballpark in America, and I may move to Pittsburgh.

Easier said than done, of course, but Schoenfield speculates on the package in return.

Here's what it will cost: Double-A starter Jameson Taillon, Keith Law’s No. 20 prospect entering the season who has pitched well at Altoona; outfielder Gregory Polanco, the No. 55 prospect who has shot up in value after a strong showing that recently got him promoted to Double-A; catcher Tony Sanchez, the former No. 1 pick who is hitting .303 with nine home runs at Triple-A Indianapolis; plus a decent C-grade lefty.

As with all packages potentially offered for Stanton, they must start with some premium talent, and Schoenfield offers a good name in Jameson Tallion, who ranked 17th among all prospects before the season according to John Sickels of Minor League Ball. He also puts up a good name in Gregory Polanco, who is currently in the outfield in Double-A after passing by High-A at a .312/.364/.472 (.379 wOBA) clip. Those two are an excellent start to a trade, and they both offer the Marlins something of interest: toolsy high-upside pitcher who is currently dominating Double-A and should be ready next year and toolsy outfielder who provides depth to an already loaded set of outfield prospects.

But the Marlins do not want "just" top 50 prospect talent coming back in return for Stanton at this stage of the game. In two years, the Marlins could bundle a decent starting pitcher alongside Stanton and get this kind of return, based on the prospective return the Fish received before 2008 for Miguel Cabrera, a similarly spectacular talent. Stanton is expected to provide around $80 million in surplus value for three and a half years of work under the arbitration system. That kind of value warrant not just a top 20 and top 50 talent, but more like at least an additional top 10 prospect. 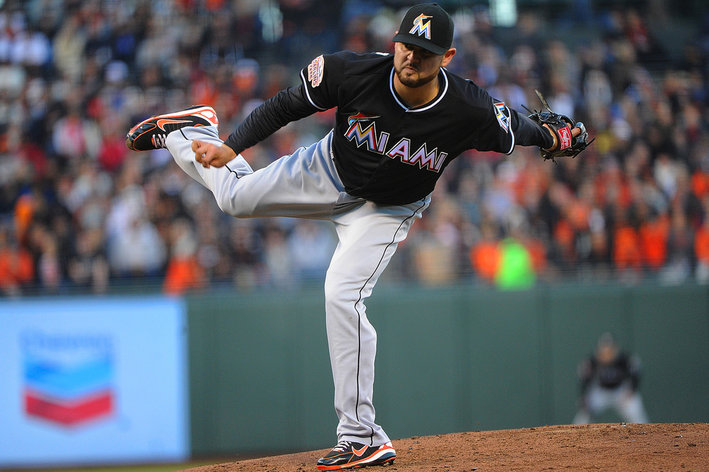 The Miami Marlins will certainly be trading Ricky Nolasco before this year's trade deadline. Could the right partner be the San Francisco Giants?

The Pirates do have that player. Gerrit Cole would be the way for any Pirates package to acquire Stanton from the Marlins at this point. Cole played well enough in Triple-A this season that the Pirates felt comfortable promoting him to the majors due to their injury problems, but he was not dominating the level like he owned Double-A last season. Nevertheless, he is the Pirates' top prospect from prior to this year, and it is simply unlikely that the team would part with their two potential ace pitchers from consecutive draft years.

Yet I believe that is what it would take to acquire Stanton in 2013. It's not a matter of being greedy so much as it is a matter of making a fair offer. Stanton is not just a superstar, but he is a cheap superstar. Cheap superstars are not one or two solid lottery tickets' worth of value. As I have said all season long, the Marlins need a lot of value to trade Stanton while he still is not earning arbitration money.

If the Pirates want to make the same offer a year or two from now, maybe the Marlins will consider it. But for now, this speculated package simply would not cut it.