An in-depth look at the five prospects in the Marlins' farm system that have the best future hit tools.

The talent-rich Miami Marlins farm system has been somewhat depleted after all the recent moves the Marlins have made calling up top prospects. Nonetheless, the Marlins still have a glut of talented hitters in the minors. Kevin Goldstein, formerly of Baseball Prospectus, defined the hit tool as "the ability to routinely put the ball into play by making solid contact with the barrel of the bat on the middle of the ball". Scouts usually give players two separate grades, one for their current hit tool and one for their future hit tool. Here are the top five prospects in the Marlins farm system, ranked by their future hit tools.

The Marlins still haven't decided whether they see Austin Barnes as a catcher or not, but they definitely are big fans of his bat. Drafted out of the Arizona State University in the ninth round of the 2011 MLB Amateur Draft, Barnes is the oldest player on this list by a wide margin. Nonetheless, he has consistently ascended the MiLB ranks year by year. In 2012, playing for Greensboro, Barnes hit an impressive .318/.401/.481 with 36 doubles. This season, with High Class A Jupiter, Barnes has hit .284/.375/.385 despite a rough May in which he hit only .223. Barnes has outstanding plate discipline and a small frame which helps to boost his OBP, but perhaps his most impressive trait is his ability to make hard contact and hit line drives. His level swing has always enticed scouts, even going back to his high school days. Austin Barnes might never be anything more than a backup catcher or utility infielder in the majors, but he still has an above-average future hit tool.

The Marlins second-round pick in the 2012 MLB Amateur draft, Avery Romero has one of the brighter futures of any of the Marlins infield prospects. He's definitely a better prospect than Barnes and Keys due to his mature approach at the plate, his power potential, and his athleticism. He has great hands and a short swing which help him make more solid contact with the ball. In three games to start his 2013 regular season, Romero has hit .455/.538/.455 for Short-Season Batavia. Romero is still just a teenager and far from a finished product. Look for Avery Romero to bolt up this list if he can mature at the plate and start putting more of a jolt into the ball.

In 2012, Brent Keys came out of nowhere to become one of the top hitters in the South Atlantic League. In particular, his month of May last season in Greensboro, one of the only months he was entirely healthy, Keys hit .412/.479/.529. This shocked a lot of people, including myself, who had no idea who Keys was until this emergence. Drafted in the 17th round of the 2009 MLB Amateur Draft, Keys has come a long ways in the last couple years. Keys is another left-handed hitter, but he doesn't have the prestige of a player like Christian Yelich or Colin Moran. However, he could still play a role in the majors down the line. He will never hit for power, but Keys knows how to use his speed to get on-base. Keys is currently hitting "only" .327/.397/.392 for High Class A Jupiter, but he's had a somewhat slow start to the month of June that has dragged down his numbers. Aside from Yelich, Keys might have the best current hit tool on this list, and he still has plenty of room for improvement. 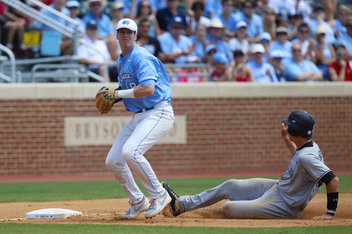 The Miami Marlins drafted Colin Moran in the first round of the 2013 MLB Draft, and his selection was perfect in more than one way.

Jake Marisnick is by far the most athletically gifted prospect on this list. Unlike many other 22-year-old prospects known for their athleticism, Marisnick has the potential to hit for an above MLB average batting average down the line. He has always been a project, and his swing looks a lot different than what it did when he was drafted out of high school, but Marisnick is one of those rare players that has a great aptitude for learning how to become a more complete hitter. In 2013, at Double-A Jacksonville, Marisnick has hit .282/.337/.584 with nine homers, eight doubles, and three triples. Even though some still doubt him at the plate, I believe Jake Marisnick will be able to hit around .300 in the majors in a few years due to his dedication to reaching his potential as a hitter.

Even though he technically has yet to play a game of professional baseball, Colin Moran comes in at second on this list for good reason. Moran is a left-handed hitter who has a great hit tool that should allow him to hit for a high average at every level of the game. In his three years at UNC, Moran hit above .330 in all of them. Assuming he signs with Miami after the College World Series, Moran will immediately become one of the top prospects in the Marlins' organization. While he could lack the power expected of a prototypical third baseman, Moran will always hit for average because of his advanced approach and bat speed. He knows how to work the pitcher to get the best possible pitch, and then to jump on it when he sees it. Moran has tremendous bat speed and he's known for his ability to put the barrel of the bat on the ball, despite having a somewhat odd swing. With these qualities, Colin Moran could be a player that hits over .300 year after year in the majors.

The consensus top prospect still in the Marlins' farm system, Christian Yelich's sweet lefty swing might be slightly unorthodox, but it's beautiful and most importantly, it works. Drafted by Miami in the first-round of the 2010 MLB Amateur Draft, Yelich has only improved his prospect stock since draft day. One could make the argument that Yelich has yet to face a level of competition that has posed a serious challenge to him. After all, across four MiLB seasons, Yelich has hit .313/.386/.500. He has an uncanny capability of squaring up the ball and driving the ball to all fields. He recognizes all kinds of pitches extremely quickly and his swing is balanced, even though he still has a few things to work on.

Christian Yelich is only on the cusp of becoming the type of hitter that he has the potential to be. He has the top future hit tool in the Marlins farm system mainly because of how complete of a hitter he is at the plate.