Guess the player! He is 6-foot-3, 245 pounds, plays for Arizona, and revels in crushing my hopes and dreams. He also hit a walk off homer.

The motion picture event of the year has arrived. Paul Goldschmidt: The Movie, in theaters now. Available with eye-popping 3D technology to enhance the Paul Goldschmidt experience. See home runs fly directly at your face.

Yes, if my life had taken a different turn, I could be marketing Hollywood films today. Check out these terrific poster taglines:

I'm Not Done Talking About Goldschmidt

I keep a running list of scariest dudes in the world, and right now Goldschmidt ranks just below Abubakar Shekau, the head of the Nigerian terrorist group Boko Haram. I don't believe Goldschmidt has a $7 million bounty on his head, but I think he's earned it.

If Paul Goldschmidt were a nuclear weapon, he would be the Tsar Bomba. My point here is that one man should not have all that power. He is a career .325/.400/.675 hitter against the Marlins.

Eovaldi Returns, With a New Look

Major League Baseball policy clearly forbids the use of controlled substances, but it contains no such clause banning the use of cybernetic arm implants. Nathan Eovaldi returned from the disabled list sporting a shining new Cyberdyne Systems Model 101 Robo-Arm.

You're probably thinking, "The machines are taking over. SkyNet will make its play soon."

This is a fair point, and we certainly have cause for concern. I'll get back to you when I have a solution to Judgment Day. In the meantime, I'm much more interested in the new half-cyborg Eovaldi, who was pumping 97 mile per hour heat in last night's game.

Don't misunderstand me, he didn't just touch 97 -- Eovaldi was averaging 96.9 miles per hour on his fastball. For a point of reference, he averaged 94.1 miles per hour the past two seasons.

Robo-arm apparently helped Eovaldi with his control too, because he only walked one batter. Here's visual proof of his excellence: 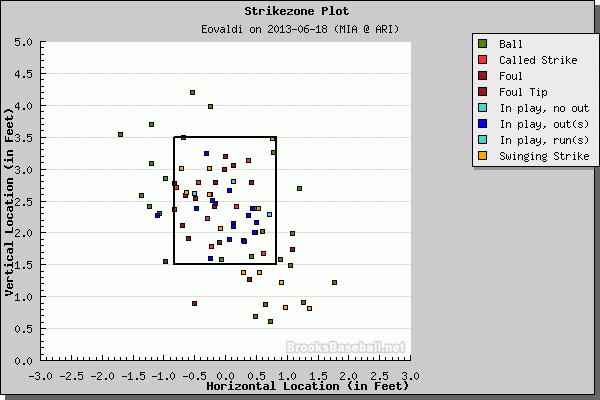 Those blue dots mean that he was great, and the yellow dots right there signify dominance. Or something like that. I don't know. It's a chart with a lot of information, therefore it must be important.

Yesterday's game rekindled my hope that Nathan Eovaldi can be a long-term part of a halfway decent Marlins rotation. Jose Fernandez seems to be on the path to stardom. Jacob Turner is drinking some kind of juice where he pitches terrible in Triple-A, but rocks the majors. It probably gives him awful indigestion. Whatever works, I suppose. Add Eovaldi to the mix, and you have three-fifths of a rotation.

This would take some pressure off the farm system to deliver more than two quality starters. Right now, only Andrew Heaney and Justin Nicolino appear likely to develop into above-average starters. There are riskier projects like Matt Krook and Mason Hope, but they are years away.

I end this piece with a final bit of salient advice: throw them fastballs hard, Nathan.