For the briefest moment in time, the Miami Marlins looked like a good baseball team. Believe in them at your own peril.

Just as I don't advise eating a pint of ice cream in one night, I strongly recommend moderation in run scoring. The Marlins scored far more than their agreed upon allotment, potentially jeopardizing their whole next week of run production.

If I were a betting man, I would put my money on a ten-game losing streak now. The Marlins are looking semi-competent for the first time in quite awhile, and my brain isn't sure how to process it. They just won a series against the best team in the league, and swept the Mets last weekend. It doesn't feel real.

Winning baseball is utterly alien to me at the moment. Some kind of horrific fate must be in store for this team.

Get your last good look at Ricky Nolasco in. Stare deep into his soul, and feel his consciousness merge with yours. This last game will likely be one of the final times you see him in a Marlins uniform.

I'm writing this recap at breakneck speed, because for all I know, he will be gone by the time I publish this.

Boy, he was good yesterday. He was so good that St. Louis walked him twice. I definitely saw that coming. 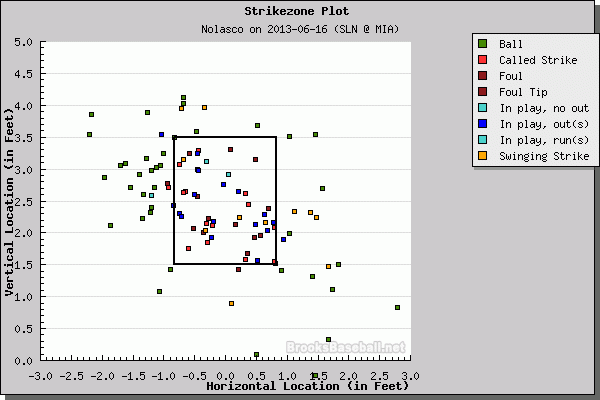 Very few of Nolasco's pitches were left in the upper half of the strike-zone. His most effective pitch was his slider, which he used to strike out Carlos Beltran, Daniel Descalso, and Tony Cruz swinging. Generally, he kept his fastball down in the zone, forcing the Cardinals to put the ball in play on weak contact.

Nolasco is very quietly having one of the strongest seasons of his career. His 3.61 ERA ranks as his second-lowest ever, while his 19.5 percent strikeout rate is his best figure since 2010. This all bodes well for Ricky's value on the trade market.

Nolasco has been a staple of the Marlins' rotation for many years now, so I will find it hard to see him depart. You can look forward to a stirring love letter to him when that day comes.

I have a confession to make, however. I lust for prospects. I envy all other prospects. I am greedy, and I want more prospects. As far as minor league baseball goes, I am the equivalent of Kevin Spacey from Seven, but instead of having a propensity to murder innocent people, I just covet thy team's prospects.

Nolasco should fetch at least one B-grade prospect on the market. That outcome is certainly preferable to letting him walk at the end of the season. He's been a nice cog in the Marlins machine for the last eight years, but he can't be part of the team's future.

The young core of the offense slowly and steadily beat down the Cardinals starter, Tyler Lyons. The 25-year-old Lyons has had a rough entry into the majors, posting a 4.64 ERA in five starts.

Sure, Dietrich and Hechavarria are barely floating north of the Mendoza line, and Ozuna has looked inert at the plate recently, but for this brief moment, the Marlins rookies were productive. They give me hope for the future of the franchise. Miami will have a successful baseball team somewhere down the line. It's going to feel great when we finally see it.