The 2013 Amateur Draft has come and gone, but how did the Marlins fare with their selections that are likely to have a huge impact on the franchise going forward?

The 2013 MLB Draft represented an important stepping stone in the rebuilding of theMiami Marlins. Holding the sixth overall selection after the much-publicized disaster of the 2012 season, the Fish hoped to make the most out of their crop of new talent in hopes of forming the foundation of the organization going forward.

Due to a rather unsurprising top five picks (though the order was a little off than what was expected), the Marlins nabbed North Carolina third basemen Colin Moran with their first-round selection. Moran was widely viewed as the best pure hitter in the draft, and there's a chance that he may move through the organization quickly.

Moran wasn't the only pick that could pay huge dividends for the club in the future, though. Here is a breakdown of the best, most head-scratching, and potential sleeper picks from the Fish's 2013 draft class.

Krook, currently committed to the University of Oregon, is a 6-foot-2 lefty with advanced secondary stuff that could become one of the best picks from this draft class. I wrote a recap of Krook's selection here, but in case you missed it, Krook's fastball sits in the low-90's and he has a sharp, biting curveball. Krook shows an advanced feel for pitching for being a prep lefty.

Krook may be a difficult sign, but according to this article from MLB.com, Krook is represented by the same agent, Matt Sosnick, as current Marlins pitcher Ricky Nolasco, and he offered this quote that sounds pretty promising:

"I love Oregon, I love the coaches up there," he said. "But I think at this point I'm ready to play pro ball. I just want to get my career started."

The organization will take it's time with Krook's development, but the lefty could soon find himself as the best southpaw prospect in the organization if all goes according to plan.

Though I voiced my opinion on not being completely sold on Moran in our Live Draft Thread, it's undeniable that he has one of the highest floors of any first-rounder. Moran possesses great plate discipline and is one of those "pure hitters" that often signify that a player is pretty close to being ready to face big league pitching.

There are some that aren't sold on Moran's defense at third, but if he's able to prove he isn't a complete liability in the field, his bat should allow him to advance quickly through the Marlins' system. He won't be the prototypical, mashing, third basemen with huge power like the second overall pick, Kris Bryant, but it's completely reasonable to believe Moran could be a .280/.390/.470 hitter in the big leagues.

The Marlins didn't expect Moran to be available with the sixth overall pick, but he was, and the organization scooped up a guy who fills a huge positional need, and one we could be seeing at Marlins Park sooner rather than later.

Wallach was the starting catcher for perennial college baseball juggernaut Cal State Fullerton, and the son of former major leaguer Tim Wallach, but his ceiling likely doesn't project to him to be more than perhaps a backup catcher in the major leagues.

Wallach has some decent power in his bat, but it's unlikely that he'll be able to hit enough to justify being a starting catcher at the big league level. Defensively, he has sound fundamentals, but only average arm strength.

The Marlins have gone through their share of catching disappointments as of late, so we can only hope that Wallach can prove his detractors wrong. If not, spending a fifth-round pick on a player of his type doesn't add up for me.

At 6-foot-3 and 230 pounds, 17-year-old prep outfielder K.J. Woods is a physical specimen that has the potential for huge power down the road. Though Woods is still extremely raw in terms of plate discipline and his overall hit tool, if he's able to fully develop his power, he could very well become a middle-of-the-order bat.

Even though he's played most of his career at first base, the Marlins selected him as an outfielder, though it's unsure whether he has enough quickness to play there. He won't be a guy that you'll see in the big leagues any time soon, but with enough refinement of his plate discipline, Woods could be one of the steals of this draft class.

Aper has absolutely annihilated Division II junior college pitching while at Lincoln Land, to the tune of 17 home runs and 51 stolen bases this season alone. He's got the physical tools to play at the next level, but there are obviously questions about whether his insane numbers will translate against better competition.

Luckily for Marlins fans, we won't have to long to see how Aper fares against said better competition, as he's already signed his contract with the Fish.

In the 14th round, the Marlins selected first basemen Scott Carcaise, a first baseman from Florida Tech. I don't have all that much to add in terms of analysis, but he is now my favorite prospect in the Fish's system because of this photo from his Florida Tech bio page: 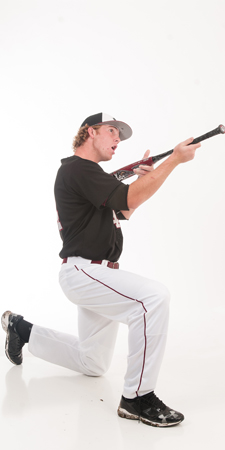 There. Now you have absolutely no reason to not have Scott Carcaise as your favorite Marlins farmhand.

If Moran can prove my doubts wrong, which I certainly hope he does, the Marlins' 2013 class could be instrumental in building the foundation for the future of the organization. With a good mix of college players who should be able to advance quickly, and prepsters with big upside, the 2013 Marlins' draft class could make Miami baseball a whole lot more bearable to watch than fans are used to.