The Miami Marlins won their second straight game against the New York Mets thanks to another strong offensive outing and another strong pitching performance by Jose Fernandez.

The Miami Marlins won their second straight game, and you can thank Jose Fernandez for a good bit of this victory. The Marlins' rookie starter was on top of his game both on the mound and at the plate. Fernandez struck out eight batters in seven innings and shut out the New York Mets along the way. The Mets were off-balance throughout the game, as Fernandez was able to induce 11 swings and misses out of 86 total pitches. The majority of those whiffs came on his devastating curveball, which is fast becoming a scary major league pitch. Fernandez threw 27 curves, seven of which went for swings and misses 17 of which went for strikes that were not put in play.

Meanwhile, Fernandez maintained his typical 95.8 mph velocity on his fastball, and that stuck around throughout the game. 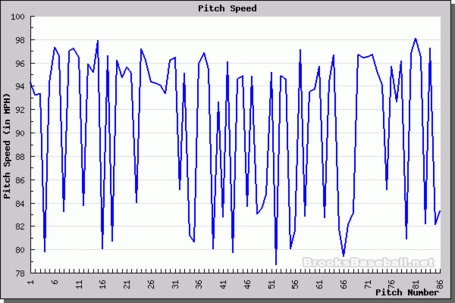 The Marlins have been limiting Fernandez's pitch counts, and perhaps that is the reason why he has been able to sustain such an amazing velocity throughout his starts.

Meanwhile, Fernandez was also doing work at the plate. He had two hits in three plate appearances, including his first career double and extra-base hit in the Marlins' four-run seventh inning. Fernandez is now hitting .250/.250/.313 (.244 wOBA) with a .444 BABIP on the year.

The rest of the Marlins were not to be outdone at the plate, as they jumped on Collin McHugh and the Mets' bullpen in spurts. The Fish chased McHugh away in the fourth inning as the team got two singles to start the inning and scored those runners on a sacrifice fly by Adeiny Hechavarria and a triple (!) by the immortal Jeff Mathis.

The team then beat up Robert Carson and Greg Burke in the seventh inning, as nine Marlins went to the plate, beginning with Fernandez's double. He would later score directly in front of a speedy, hustling Juan Pierre on a Derek Dietrich bloop single. Chris Coghlan and Hechavarria drove in runs as well as the team took an 8-0 lead.

Coghlan had three hits, bringing his season line to.274/.333/.416 (.325 wOBA). On the down side, Marcell Ozuna's 16-game hit streak ended with his 0-for-3 night, though he did also draw a walk. The Marlins will look for the sweep tomorrow afternoon with Kevin Slowey on the mound against Mets young ace Matt Harvey.