The Christian Yelich promotion and the Giancarlo Stanton comparison

The Miami Marlins have only one top prospect left to promote. Christian Yelich may take a similar approach to what Giancarlo Stanton did in 2010, but will he have room in the majors to play?

Share All sharing options for: The Christian Yelich promotion and the Giancarlo Stanton comparison

Earlier today, we discussed the potential for the Miami Marlins to rush the rest of their prospects to the majors. In the article, we mentioned that the big remaining name and the player most likely to make a jump from Double-A is top prospect Christian Yelich, who is currently raking in Double-A to the tune of a .333/.382/.635 (.454 wOBA) in 68 plate appearances. Yelich, who ranked second on out top 20 prospects list, is extremely polished for a high school player, and he is already likely one of our top three outfielders in the organization.

So it seems natural that, with the Marlins rushing a lot of players up to the majors, the team may turn to Yelich next. In fact, the Fish even have a model to move a top prospect up at this level of his career. Superstar Giancarlo Stanton was at the same time of his development when he received the call to the majors. But does Yelich's current situation match up with Stanton's?

Stanton's promotion was a surprising one in 2010, as most fans had figured the Marlins would be patient with a hitter who had such an extreme flaw in his game. Stanton was still striking out 22.1 percent of the time in the season in which he was promoted to the majors, and the thought was that the team would let Stanton stick around in the minors a little longer to work on that in a safe environment before bringing him to the majors. Of course, Stanton was also hitting .313/.442/.729 (.494 wOBA) in his 240 plate appearances in Double-A by that point, so it was clear that Stanton was ready to leave that level behind.

Stanton made his debut on June 8, 2010, as the Marlins promoted him and demoted struggling center fielder Cameron Maybin to the minors. By the time Maybin was demoted, he was hitting just .225/.290/.341 in 201 plate appearances. The Fish replaced him in center field with Cody Ross, who had moved out of right field to make room. At that point, Stanton began his spectacular Marlins career and never looked back.

What are the similarities between what Yelich may be going through in a few months and what Stanton went through in 2010? The first criterion Yelich needs to meet is the complete domination of the Double-A level. So far, he has hit very well, but his time in Double-A has been cut short thanks to a preseason injury that kept him away from the field until late April. Yelich has only played 14 games thus far in Double-A, so it is impossible to tell whether he will continue to hit well like Stanton did.

Stanton also had the advantage of spending time in Double-A in the previous season. He destroyed High-A pitching well enough in 2009 to earn an early promotion to Double-A, meaning he had 341 plate appearances in Double-A in addition to his 240 in 2010. Stanton had seen that level of play for 581 plate appearances and 132 games, essentially a full year at the level. Yelich only just recently made the Double-A jump this year, and if he were to be promoted this season, it is likely he would have less than 100 games at the level. Stanton had plenty of time to prove that he was ready, but a 2013 promotion for Yelich would not afford the same kind of time.

Larry Beinfest: "I don't even know who's here anymore" 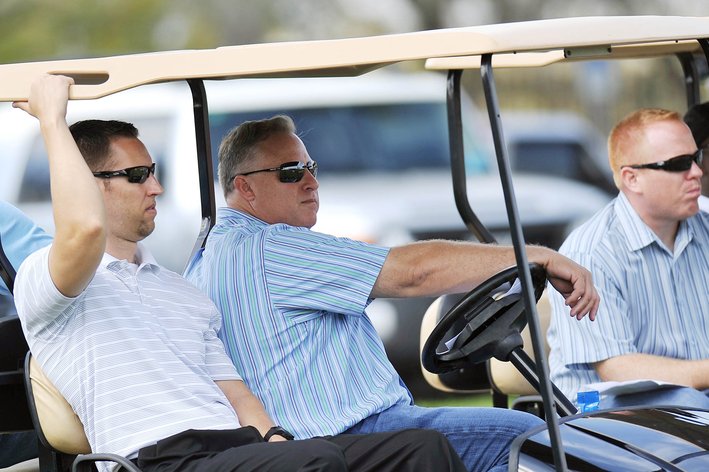 Miami Marlins president of baseball operations Larry Beinfest admits that the team's injuries have forced them into pushing their prospects earlier than initially planned.

The next criterion for Stanton promotion was that there was a spot open in the roster. Cameron Maybin was struggling and the Marlins needed an outfielder, or at least was what their thinking process was. Maybin was easily demoted in favor of Stanton when the time came and the Fish needed better production. They had a player in Ross who could accommodate by virtue of being able to play multiple positions.

The Fish have a struggling outfielder this season, and they also have a player who can move to different positions as needed. Their straggler is Juan Pierre, the veteran and former Marlin who was signed in the offseason to be a stopgap in left field. Pierre is hitting a pathetic .239/.294/.274 (.258 wOBA) and has been replacement-level all season long. If the Marlins were to bring up Yelich, it would likely mean the benching of Juan Pierre.

Would Pierre be willing to head to the bench? He was signed to be a starter in left field, but prior to that, Pierre was on the major league ropes. He had a nice year with the Phialdelphia Phillies last year, but he still began the season on the bench and only found his way into the starting lineup after a series of injuries and trades opened up permanent spots. Prior to that, he had spent a few years starting for the Chicago White Sox, but that followed a few years on the bench for the Los Angeles Dodgers. Given his respect with the organization, I suspect Pierre would be willing to step back into a smaller role to accommodate a future star like Yelich.

Justin Ruggiano would make room for Yelich as well. Yelich is likely to take over center field, given the Marlins' hope that he is capable enough defensively to hold that job and increase his value. Ruggiano can shift to left field, which would be significantly easier for him.

The problem at the moment is that the Marlins have a few more outfielders on their hands. Currently the team is running prospect Marcell Ozuna in right field, and he has gotten off to a strong start (.371/.405/.600, .431 wOBA). There is always a chance Ozuna, whom most prospect evaluators thought was not ready for the majors this season, struggles from here on out and makes the Marlins' Yelich decision easier. But what if Ozuna continues to play well and Stanton returns from the disabled list? The Marlins would have three capable outfielders and a benched Pierre already, without the promotion of Yelich. The Fish would not demote a successful Ozuna for Yelich, especially since bringing Yelich up would require finding more room for him in the 40-man roster. Stanton is unlikely to be trade this year, especially after his hamstring injury, and Ruggiano is not likely to be dealt simply due to a lack of return at the moment. If Ozuna plays well, the Marlins will not have room at the moment for Yelich.

Yelich may be on a similar minor league warpath as Stanton, though that at the moment is not even a guarantee. But even if he does tear up the minors, his experience level is still lower than Stanton's was when he was promoted, and his path to the majors is a lot less clear because of the presence of Marcell Ozuna and his potentially strong play. There is still a chance the Marlins simply do away with Ruggiano via trade or, in a dire scenario, trade Stanton before the offseason. But it seems Yelich's path to the big leagues is directly tied to the success of his outfielder prospect brother Ozuna.