The Miami Marlins were already going to be a bad team in 2013, but the injuries of this year have not helped the Fish.

The Miami Marlins were going to be very bad in 2013, and every Marlins fan knew that going into the season. What those Marlins fans did not know was that the roster the Marlins would be boasting would be even worse thanks to what seems like a never-ending slew of injuries that force the Fish to replace mediocre talent with players worse than that.

In the wake of news that second baseman Donovan Solano is likely to be going to the disabled list with left-sided "discomfort" and the subsequent shifting of Henderson Alvarez to the 60-day disabled list, the Marlins are facing a situation in which the team is once again scraping for help at various positions. The club's bench depth has been severely compromised because of the injuries to players, and the team had to make further roster moves just to accommodate utility infielder Nick Green, who was just designated for assignment and outrighted to Triple-A following the return of shortstop Adeiny Hechavarria.

I took a gander at the Marlins side of the latest Baseball Prospectus Collateral Damage report, which shows the team's injuries and all of the players residing on the DL. The list is comprehensive. 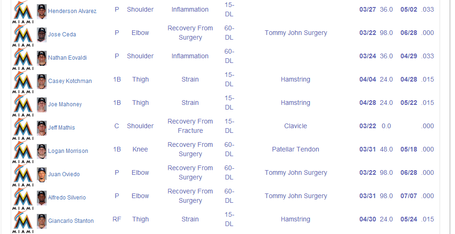 The Marlins are loaded with names on there, totaling 10 players in all, and this has yet to include Solano's injury Currently, only the New York Yankees and their old roster have more players currently on the disabled list. The Fish are not populating their injured list with older stars like the Yankees. Of the players on that list, the only veterans are Casey Kotchman and Jeff Mathis, with the rest of the players being youngsters who are trying to get a start in the major leagues. The Marlins are losing a lot of young talent they needed to utilize in 2013.

A glance at these players yields disappointing stories at each spot. Alvarez and Mathis are two players who came from the Toronto Blue Jays trade and were supposed to become instant roster contributors, but neither has stepped onto the field as a Marlin in 2013. Alvarez and Nathan Eovaldi specifically were supposed to be regular starting pitchers, but their absence has led the Marlins to struggle with Alex Sanabia and Wade LeBlanc and their currently awful starts. Logan Morrison's knee continues to bother him, but it has not helped that neither of the team's first base replacements, Kotchman and Joe Mahoney, have been able to stay in the lineup either. Mahoney went on the disabled list just a week after he returned from it for a different injury. Alfredo Silverio was supposed to play a nice role as a bench outfielder, but instead the Marlins are rolling with Chris Coghlan and Austin Kearns, two players with little upside remaining, in that department.

Of course, then there is the injury to Giancarlo Stanton, the most devastating of them all. Stanton's hamstring strain will keep the team's only star player out another month at least. It also kick-started the arbitration and team control clocks of prospect Marcell Ozuna, who thankfully has been more than holding his own thus far in the majors. Still, Ozuna is probably being challenged more than is necessary by a move like this, and the hope is that it does not eventually stunt his growth. Still, the dropoff between Stanton and Ozuna is likely still large at this point, and the Marlins are suffering more lost games because of the lack of Stanton in their lineup.

Replacing the Marlins' meager players with replacement-level talent is likely to cost the team a few wins by the end of the year. Stanton's injury alone probably costs the Marlins a little less than a win in the standings. If each injured starter is replaced by someone at replacement level, the Marlins will likely lose about a win more for every two or three injuries to starters. Eovaldi, Alvarez, Solano, and the first base conundrum should tick the Marlins off another win or two, meaning the Fish are currently wasting away at least three wins from their likely paltry starting total.

But the wins, again, are not all that important, What is most pertinent in these injuries is the time lost in development. Players like Alvarez, Eovaldi, and Solano all could use the seasoning of regular season Major League Baseball to work on their games. Even a player like Logan Morrison needs the time as an audition to show that he has some growth left in him and that he could be a part of this organization's future. Stanton was just getting back into the swing of things and could have used the time to refine his approach at the plate in response to the new method pitchers are using against him. All of these players could very easily benefit from game time, but these injuries have hampered that as well.

The Marlins began the season in a difficult position, but it has only gotten worse because of the injuries. The team is forced to play players it has no interest in evaluating, guys like Nick Green, Chris Valaika, and Greg Dobbs, in full-time roles due to these various ailments. It does not get a chance to see the players who may actually have a future in the organization because they happen to be in the disabled list. All the while, the Marlins are losing more games and looking worse for the wear. The injury situation has reached a critical mass in Miami, and there does not seem to be an easy way out of the problem.