Jose Fernandez leads the Miami Marlins to an impressive 2-0 shutout of the Philadelphia Phillies.

The Miami Marlins entered tonight's game with one hope: that Jose Fernandez would deliver a gem like the ones he threw at the beginning of the season against the New York Mets and Philadelphia Phillies.

Fernandez could not have pitched better in tonight's game against the Phillies, as he dominated the lineup left and right. Whether the hitter was a lefty or a righty, Fernandez made the Phillies look silly, and he did so by doing two things that he did not do in his previous three difficult outings: pound the strike zone and get swings and misses.

It sounds simple, but Fernandez needed to induce strikes as much as possible, and in previous outings, he was both wild around the strike zone and unable to get hitters to miss on his pitches. Both could have been a problem of having hitters be more selective against his stuff out of the zone, but that issue could have come about because he was not getting ahead of hitters either.

This start was completely different. 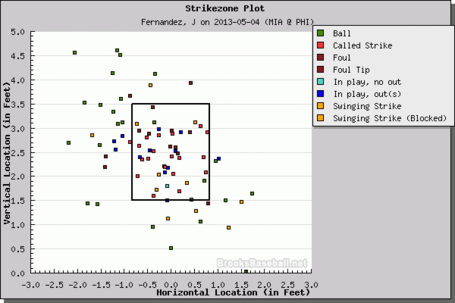 Fernandez still peppered the outside of the zone with pitches a foot and a half off the plate. But if you compare that to his last start: 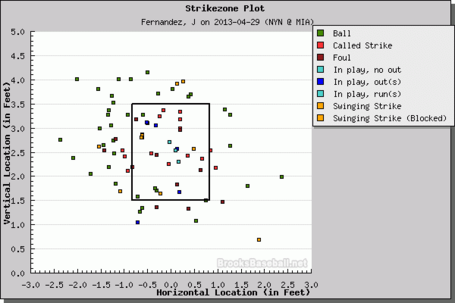 You can see that he hit the zone a lot less in the latter than he did in the former. There were chunks of strikes and foul balls letter-high in the zone in tonight's start, combined with a good number of called strikes. There were also fewer green dots that indicate balls, and when you look at the actual numbers, this difference is drastic. Fernandez threw 25 balls versus 20 called strikes, good for a fantastic 1.3 balls-to-called-strike ratio.

This large number of strikes translated to a fantastic first strike rate. A whopping 59 percent of Fernandez's plate appearances that went to a second pitch started with a first pitch strike, which almost certainly helped him work outside the zone later on with hitters behind. That ability to expand the strike zone comes with solid control in the first few pitches and makes Fernandez's potent swing-and-miss stuff more dangerous.

And swing and miss the Phillies did. Fernandez induced 13 whiffs in 82 pitches, an absurd 15.9 percent swinging strike rate. To get an idea of how good that is, only one pitcher can claim a better record on swings and misses this season, and that is the currently out-of-this-world Yu Darvish. The qualified leader in this department since 2010 is Francisco Liriano at 12.4 percent.

Fernandez blew past hitters with both his fastball and curveball. The fastball was as good as always, up at 95.5 mph on average and getting five whiffs in 55 attempts. But the curveball was extra effective, as he not only got seven called strikes versus eight balls on the pitch, but he also got five swings and misses. Fernandez threw 27 curveballs and, when you add the four foul balls, 16 of them went for strikes. The curveball was expertly thrown this evening.

Marcell Ozuna hit his first home run of the season, and while it was not the sort of light tower-power shot that a prospect whose plus-plus tool is power should provide, it was a healthy sign for a player who is fast becoming a favorite of the Marlins and their fans. Ozuna's only hit tonight was the home run, but he also added his first walk of his big league career, and that is at least encouraging. Fans of Ozuna are hoping for more long balls, but they also would like to see if he can avoid the strikeouts and draw walks, thus continuing his plate discipline as he has in the last two seasons. Ozuna walked and did not strike out tonight, indicating a positive sign.

Chris Valaika Does Too

Not to be outdone, but Chris Valaika also hit a home run, and it actually traveled a little further than Ozuna's. Valaika's solo shot put the Marlins up 2-0, and it was his first as a Marlin and second big leauge homer. The home run, combined with the 1-for-4 night, leaves Valaika with a .250/.286/.404 (.297 wOBA) batting line on the season, which is on par with what we expected but certainly not starting material.