Did the Miami Marlins just suffer another unpleasant loss this year? You bet they did.

Expected Fielding Independent Pitching (xFIP) hypothesizes that a pitcher's home run rate is naturally unstable and prone to variation. Before Friday, Nolasco's 4.37 xFIP suggested that his 3.82 ERA was unsustainable, due to his low home run to fly ball rate. The spectral ghost of xFIP has come back to haunt Nolasco, as three of his nine fly balls allowed sailed into the stands. 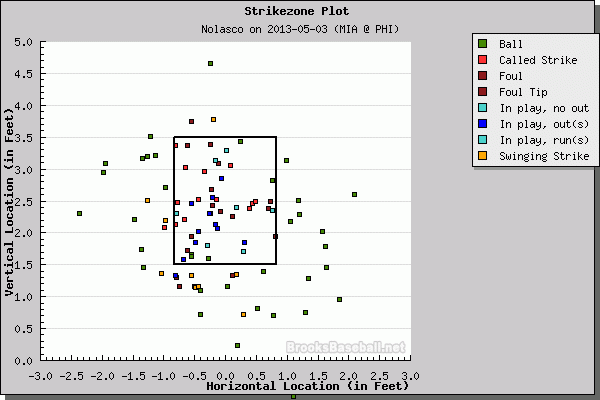 Despite some poor luck on fly balls, the Pitch F/X data provided by BrooksBaseball.net suggests that Nolasco did not pitch all that poorly. Umpire Paul Schrieber squeezed him numerous times, and Nolasco missed more bats than usual, generating ten whiffs in 95 pitches. Prior to Friday night, he held a 6.4 percent whiff rate this season. It only resulted in four strikeouts, but his stuff was better than usual.

It would seem that Nolasco over-performed in his first six starts, and this unlucky start served to bring his season line back to its expected place.

The Marlins faced rookie starter Jonathan Pettibone, who was called up earlier in the season to replace the injured John Lannan. Pettibone is a talented player, and not one to be underestimated. Baseball America ranked the 22-year-old as the fourth best prospect in the Phillies farm system this off-season.

Pettibone pitched effectively throughout the night. He threw strikes, and induced mostly weak contact from the league's worst offense. The Marlins sole run came off a Donovan Solano home run to center field in the fourth inning.

After Marcell Ozuna hammered a near home run to left field in the seventh inning, the Phillies replaced Pettibone with Antonio Bastardo. Bastardo appeared incapable of throwing strikes to the first three batters. He issued back-to-back walks to Rob Brantly and Adeiny Hechavarria. The Marlins brought in lefty Austin Kearns to face the right-hander Bastardo, but Kearns took a couple ill-advised swings at balls, and ended up striking out. Matt Diaz was called out on strikes, ending the rally. The Marlins had a clear window of opportunity to score off Bastardo, but failed to capitalize on his wildness.

The Marlins faced Mike Adams, a considerably better reliever than Bastardo, in the eight inning, and managed to get two runners on again. Once again, it did not result in runs scored. The Marlins ended the evening hit-less with runners in scoring position. Jonathan Papelbon easily closed out the game with two ground-ball outs and a strikeout.

The only truly positive comment I can make about this game is that Marcell Ozuna looked outstanding. His fifteen plate appearances represent a tiny sample size, but his talent is already evident. He plays with great energy in right field, and his tremendous bat speed results in some very hard contact. He could be a remarkable hitter in two or three years. Unfortunately, two years will feel like decade if the Marlins keep playing this badly.