The Miami Marlins had a chance to win the game against the Tampa Bay Rays late, but the Fish could not hold them in the ninth inning and they lose their ninth-straight game, 5-2.

The Miami Marlins stayed close despite a bad start by Ricky Nolacso, but the Fish could not hold the Tampa Bay Rays down. Nolasco only allowed three runs in the game, but he struggled with his peripherals. He allowed an uncharacteristic four walks in 6 2/3 innings. He also struck out five batters in the game, despite just seven whiffs in 97 pitches.

Unfortunately, the walks hurt badly, and it was easy to see how that happened. 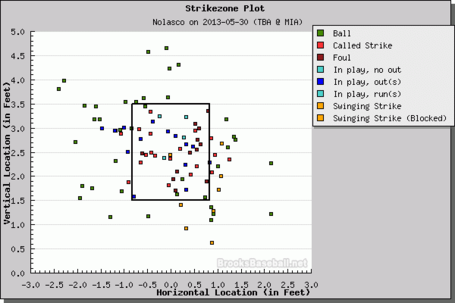 Nolasco threw way too many pitches way out of the zone, and the Rays did a good job of laying off of pitches out of the zone and keeping themselves ahead in counts.

Meanwhile, Rays rookie Alex Colome made his debut and dominated the anemic Marlins offense. The Fish managed five hits against Colome in 5 2/3 innings, but they also struck out seven times and walked just twice. The Marlins' only run in the early portion of the game was in a first-inning rally in which the Marlins loaded the bases on the two walks and a single. Jose Molina allowed a passed ball with the bases loaded and Marcell Ozuna scored, but the Marlins failed to capitalize further and ended the inning with just one run.

With the team down 3-1, the Fish had yet another opportunity to catch up. Placido Polanco and Justin Ruggiano walked and Greg Dobbs reached on an error, but they were staring down a two-out situation. Miguel Olivo entered the game and magically drew the rare walk to drive in one run. Unfortunately, Rob Brantly struck out in the next plate appearance and ended the inning.

Mike Dunn entered in the ninth inning down 3-2 but quickly gave up two hits and a walk, including a Ben Zobrist double that drove in two runs that finished off the Fish. The Marlins have lost nine straight games and will face off against the New York Mets over the weekend starting tomorrow night.