Has the Miami Marlins offense been improving?

Has the Marlins offense begun to improve, or have the Fish remained on a terrible pace?

Share All sharing options for: Has the Miami Marlins offense been improving?

For what seems like the entire season, the Miami Marlins have been fighting the label of "Worst Ever". As many wise people (like our own Michael Jong) will tell you, "never bet on history" and as such The Miami Marlins are not likely to be the worst team ever even though they have had their fair share of offensive struggles. If the season ended today their wRC+ of 63 would be the worst ever. So, yes through the first 51 games of the season the Miami Marlins offense is certainly in the running for for "Worst Ever"

The Miami Marlins have been dreadful so far in 2013. After winning just eight games in April, the voice of reason said that the Miami Marlin's cannot possibly be this bad as a .296 winning percentage would have put them among the worst in history. If the pace held the Marlins would be looking at 48 wins on the season. A pathetic total,

Since the start of May the Marlins have played 24 games and have won just five of those. Good for a win percentage of .208. The Miami Marlins still have four games to play this month, but thus far they have actually been WORSE than in April. So lets take a closer look at the offensive production of the Marlins 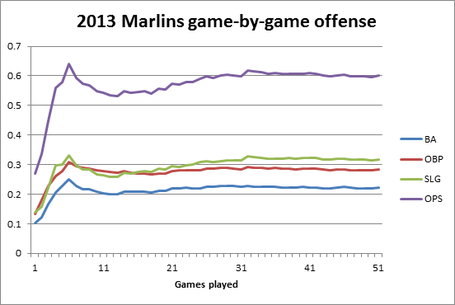 As you can see from the graph, after some insanity in the first 10 games of the season, some of the common offensive metrics have been evening out. In a small sample almost anything can happen and in the first 10 games the Marlins offense has looked both it's best and it's worse. But since then the numbers have become more inelastic with every game played.

Towards the start of the season, everyone knew the Marlins offense would improve. one run in the first three games was a pace that was impossible to maintain. So regression to a mean was an obvious development, since then the Marlins have totaled a 2.7 runs per game, which is still horrid. Actually, since an early-May peak in BA / OBP / SLG / OPS, a peak that took place after a 14-run game at Philadelphia on May 5, the Marlins offensive metrics have been in decline.

Yes, since Cinco De Mayo, the Marlins have been hitting the ball even worse and have managed to, as of May 28, continue to hit the ball at a historically bad rate. In fact they have been trending downward. But 51 games is still a small sample.

The Marlins will in all likelihood improve offensively. So far they have not, but that improvement could come with the return of Logan Morrison, Giancarlo Stanton and the possible call-up of Christian Yelich. Impending transactions will improve the talent-level of the Miami Marlins. With better bats it is hard to imagine the Miami Marlins still hitting at this historic rate. The Marlins might still end the season as the worst hitting team in 2013 and I might actually expect that. Historically bad? doubtful, but with every passing day and every out made it becomes closer and closer to being reality and at this point in the season it might be wise to acknowledge the (still very slim) possibility that we are watching one of the worst hitting teams ever.