The Miami Marlins cannot score a run against Cliff Lee as the Philadephia Phillies shut out the Fish 3-0.

The Miami Marlins got a solid performance out of starter Kevin Slowey against a good Philadelphia Phillies offense. Cliff Lee and the Phillies prevented the Marlins' offense from getting started as well, as expected. The problem is that Slowey's good job held the Phillies to just one run on six hits, with six strikeouts to Slowey's name, while Lee took it to the next level and went the distance against the Fish and struck out five with only three hits allowed.

Slowey was certainly not to blame for this loss. His six strikeouts came on seven swings and misses and, more importantly, he was able to locate well in the zone. His strike zone acumen was impeccable. 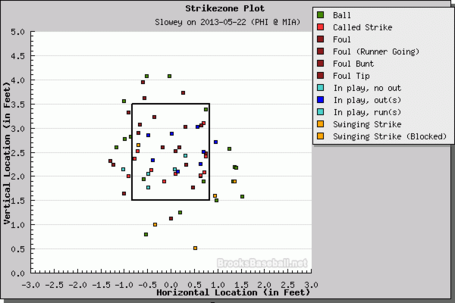 Slowey scattered six hits but only ran into trouble once, when Delmon Young (once again) went deep on him and the Fish in the fourth inning. Slowey's only other problem came in the fifth inning, when he allowed singles to Cliff Lee and Jimmy Rollins and an error put the runners on second and third base. But Slowey was able to get out of it and retain just a one-run deficit.

But Wade LeBlanc was the culprit for hastening the team's loss. LeBlanc entered the next inning and got two quick outs before allowing three consecutive hits, including a Domonic Brown triple to drive in the first run of two runs. The Fish, on the other hand, could not squeeze out anything mroe than three hits against a typically dominant Lee performance.

The Marlins have an off-day tomorrow before starting a three-game series against the Chicago White Sox.