Jose Fernandez and the Miami Marlins stuck around early, but the bullpen surrendered six of the Philadelphia Phillies' seven runs en route to a 7-3 loss.

The Miami Marlins stayed in this game on the back of Jose Fernandez's unspectacular start. He only struck out two batters and gave up a home run to Delmon Young, but Fernandez also scattered just five hits and had the benefit of defense playing well behind him. As a result, he gave up only one run, the Young solo shot, before departing after the fifth inning in typical pitch-count fashion.

If Fernandez wants to pitch deeper into games, he will have to be more efficient than he was tonight. Take a look at his terrible pitch placement. 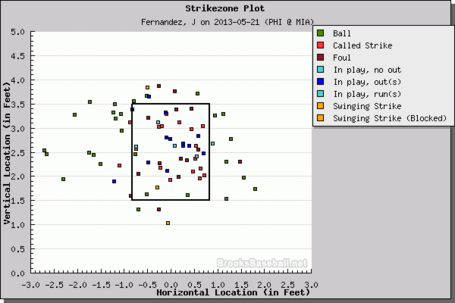 His inability to pitch int he strike zone built up his pitch count and, combined with a lack of swings and misses (only three tonight), the Marlins did not get enough effectiveness from their rookie phenom.

But it was the offense and the bullpen that ultimately sunk the Fish. The Marlins' offense was at its typically poor self early, but it picked up late in the game once the Phillies pulled way ahead. The Marlins ended up with ten hits and a .316 wOBA. Unfortunately, only two of those ten hits went for extra bases, and once again the Fish were unable to display power with those swings so much as speed.

The bullpen failed the team as well. Duane Below made his Marlins debut tonight and struggled in his one inning, giving up three runs on four hits and facing eight batters total. Ryan Webb followed that performance and fared no better, facing seven batters and giving up two runs, though he struck out two in the inning as well. Overall, the Marlins' pen of Below, Webb, Wade LeBlanc, and A.J. Ramos gave up six runs total, with only Ramos going run-less in his inning.

The Marlins will go for the series win tomorrow night with Kevin Slowey on the mound.