2013 MLB Draft: Mock drafts from around the Internet

In space, no one can hear you draft.

Share All sharing options for: 2013 MLB Draft: Mock drafts from around the Internet

Fish Stripes aspires to be a sophisticated baseball blog. You may have noticed that the Game Threads here don't receive thousands of posts like on other SB Nation sites, and this is by design. The content here is for elite, high-minded folks. But once in a while, I feel like throwing a bone to the common rabble. What better way exists accomplish this than writing about mock drafts?

Mock drafts are good fun. Rarely do they provide meaningful information, but they serve as great entertainment for the poverty-stricken masses. So enjoy this rare treat, because the remainder of the draft coverage will be very self-serious business.

This choice is a bit of a head-scratcher for me. The other mock drafts assume that Renfroe is taken in the middle of the first round. I didn't include him in my player write-ups because I don't consider him one of the top fifteen players in this year's draft class. If the Marlins took him with UNC third basemen Colin Moran still on the board, I would likely go berserk. Maybe throw my desk lamp at the floor, or break my fist on a wall.

In all fairness, Hunter Renfroe is a good prospect. He's a toolsy outfielder in the mold of Marcell Ozuna, boasting huge raw power and powerful arm strength. He's batting .362/.459/.591 for Mississippi State right now. The problem is he won't be the best college bat available with the sixth pick, and the Marlins don't need another right field prospect at the moment.

While a less baffling choice than Hunter Renfroe, Reese McGuire would still represent a reach for the sixth overall pick. Clint Frazier and Austin Meadows stand out as significantly better high school bats. I figure at least one of them should be available when the sixth pick rolls around. 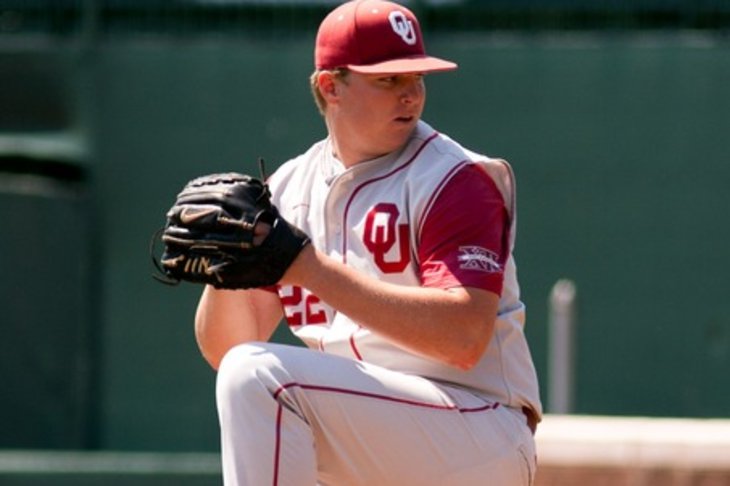 The First-Year Player Draft fast approaches, and the Miami Marlins are in excellent position to select a top-tier prospect.

McGuire is an athletic, young catcher with good bat speed, but he doesn't have the plus-plus hit tool of Meadows, or the outstanding raw power of Frazier. The difference in quality between them and McGuire is substantial enough that it shouldn't matter what positions they play, or how difficult they might be to sign.

This pick would please me greatly. I view Jonathan Gray and Mark Appel as the only two college pitchers likely to become elite starters - the talent falls off greatly after them. So if the Marlins want high-ceiling pitching, they will have to look to the high school ranks. They couldn't pick a better target than Kohl Stewart. I wrote the following about Stewart:

He possesses incredible athleticism, and already features three strong pitches. His fastball sits in the low-90s, but he uses it with finesse and confidence. His power slider wrecks opposing batters, and his change-up is well developed for a prep pitcher.

As excited as I am about the prospect of the Marlins drafting Stewart, I don't believe there is a high likelihood that they will. There are persistent rumors that the Marlins are looking to save money in the first round, perhaps by selecting a college player. Remember, this is a team with a long track record of spending as little as possible on the draft. Kohl Stewart could be the most expensive player available, considering his commitment to play football at Texas A&M.

Braden Shipley, along with Sean Manaea and Ryne Stanek, is a member of the aforementioned second tier of college pitchers. As Manaea and Stanek have struggled with command, Shipley has quickly risen up draft boards this spring. Manaea looked amazing in the Cape Cod League last summer, but he hasn't been the same pitcher since. So while Manaea might have the highest ceiling of the three, I would take Shipley over him if I am a team looking for college pitching.

Shipley has everything that you would expect from a top college arm. His repertoire includes a mid-90s fastball, a strong change-up, and a hard breaking ball. Most impressive about Shipley is his mound presence. He's a fierce competitor, and never backs down from challenging opposing batters. He may not feature a devastating fastball like Jonathan Gray, but he's a more than adequate prospect nonetheless. I think the Marlins can dream bigger than Shipley, but I wouldn't feel disappointed if they end up taking him come June 6.