The Miami Marlins were not expecting to promote all of their prospects so soon. What could their plan for their top prospects looked like before the injuries of 2013 set in?

The Miami Marlins have had a rash of injuries lately, and that set of injuries has forced the team to promote its prospects to the majors early. Marlins president of baseball operations Larry Beinfest mentioned that the team's plan may not necessarily be ruined just because of the early promotion of players.

"I don’t know if it messes up the plan," Beinfest said when asked if he’s concerned players are being brought up too early. "You’ve got to do what you’ve got to do. I don’t think anybody thought that Derek Dietrich would be here today, but eventually he was going to be here. Eventually, Ozuna was going to be here. Eventually, [outfielder Christian] Yelich will be here, [outfielder Jake] Marisnick will be here. [Pitcher Justin] Nicolino. Eventually, they’ll get here.

But it makes a fan of the team wonder what that "plan" actually was to begin with? What did the Marlins initially plan on doing with prospects like Jose Fernandez, Christian Yelich, and Marcell Ozuna before the season began and the injuries began to mount. What follows is what I suspect is reasonable promotion plan for the players that the Marlins had. This is based on previous team history on promoting young players and the situation at the major league level.

More: Beinfest: "I don't even know who's here anymore" Yelich promotion and Statnon comparison Should Marlins bring up rest of prospects?

The Stars: Fernandez and Yelich

The two premier players in the Marlins' minor league organization are Jose Fernandez and Christian Yelich, who were ranked fifth and 15th respectively by Baseball America's top 100 prospects before the season. These two players, more than anyone else, carried the future of the Marlins in their hands, as they are to carry the torch of this team for years to come.

For star players, a typical team follows a process that maximizes the team's control of the player and minimizes their costs. A star player under team control is the best asset any small-market team like the Fish can have, and the Marlins are sitting on two potential talents of that caliber. Thus, in order to do this, I suspect the Marlins would have promoted Fernandez and Yelich in June or July following a hot start in Double-A.

This move is the most logical for a variety of reasons. First off, it gives the team a free half-year to evaluate them early in their rookie careers without sabotaging team-control. By promoting them just 11 days after the beginning of the season, the Marlins can gain an extra year of service time at the tail end. Furthermore, it keeps the two players cheap by generally assuring that they do not hit Super Two status and begin arbitration a year earlier in their team control, A star on a rookie contract is an even more powerful asset to a supposedly money-starved team like the Marlins.

Secondly, it allows the Fish to evaluate the players following the most difficult talent jump in the minor leagues. The Marlins could wait and see how well Fernandez and Yelich responded to Double-A. If they both played very well, the team could be assured that the players were ready for a promotion to the big leagues and they would allow them half a season to get their feet wet as rookies. If they struggled, the Marlins would know to allow more time in the minors to work on their game.

2013 Marlins: Replacing the injured with prospects 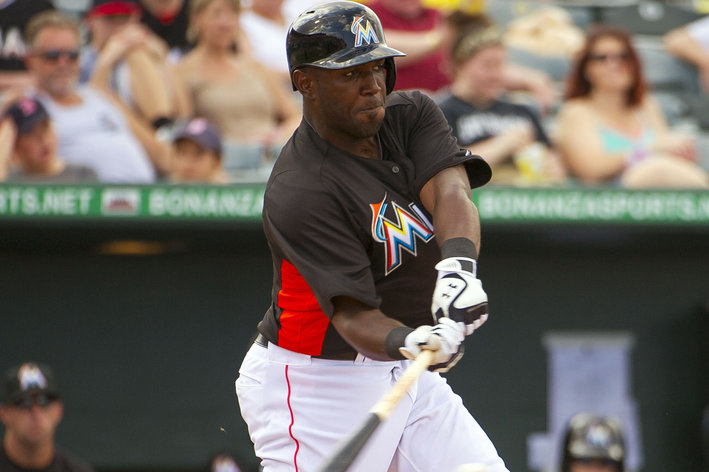 With Jose Fernandez, Marcell Ozuna and now Derek Dietrich the Marlins have begun the habit of replacing DL time with prospect service time.

The Fish did such a thing with Giancarlo Stanton, who spent two half-seasons, including half a year in 2010, in Double-A before being promoted. Stanton was allowed time to not only develop but destroy the Double-A level, and the Marlins brought him up in June of 2010, thus giving them an extra year of service time and preventing Super Two status.

These players were at the Double-A level or higher and likely could have seen major league playing time depending on their performance. With the exception of perhaps Jacob Turner, each was likely to see a full season of minor league play, followed by a September call-up for a major league audition.

Among these players, there are two tiers in terms of promotion possibility. The first tier includes players who have seen Double-A playing time before this season, including Turner, Derek Dietrich, Jake Marisnick, and Zack Cox. Had any of these players broken out in a big way, the Marlins could bring them up to the majors earlier than September, at around the same time the Fish would bring up Fernandez or Yelich. Of the three, a hot start by Turner would have most likely gotten him a promotion. Dietrich and Cox had advantages to the majors in that they could play third base were the Marlins to evacuate the position by trading Placido Polanco. Marisnick had the worst Double-A showing and is the youngest among these players, so he was the least likely to see early playing time before September.

The other two were supposed to be projects who got full seasons in Double-A to develop. None of three between Marcell Ozuna and Adam Conley were expected to see much playing time at the majors this year, and it is likely only the best of these three would have received September call-ups. This differs from the first tier of support players, who would have all been brought up to the majors for a trial in September.

The Marlins did something similar to this plan with Cameron Maybin, a high-impact prospect acquired from the Detroit Tigers who was toolsy but still potentially raw coming out High-A in 2007. Maybin came off of a nice season in High-A, but the Marlins gave him a full year of Double-A before calling him up in September. He hit .277/.375/.456 (.377 wOBA) and played well in his audition, thus earning an Opening Day job in 2009.

How is the plan affected?

Well, the Marlins already brought up Dietrich, Ozuna, and Fernandez. Christian Yelich is hitting well enough to be on his way to the majors, but he may have some small roadblocks as well. The remaining four players listed here are at varying levels of performance. Cox was off to a hot start before getting hurt, and he is almost certainly going to be promoted in September provided the team can find a spot in the 40-man roster and he remains healthy. Jacob Turner will see September playing time, but will he even be considered a prospect by that time given his early struggles this year?

The other two players, Marisnick and Conley, are currently working at about a Double-A level and will likely not be brought to the big leagues. Given that neither is on the 40-man roster either, it is likely they will see Arizona Fall League play rather than September major league play.

Who ended up being rushed? The players already in the majors certainly were pushed, but the remaining players are on track, provided the Marlins do not run into more problems. We are one month away from a Christian Yelich promotion being an acceptable roster move, and the other players are not impressing enough to find their way into the bigs. If the Marlins can stay on track with a plan like the one above, they can minimize any damage they have already done to their long-term goal of contention with this new prospect core.