Jose Fernandez had as strong a major league debut for the Miami Marlins as they could have imagined, striking out eight batters and looking the part of an ace. What did Pitch F/X see from his pitches?

The Miami Marlins were hoping for a good debut for top pitching prospect Jose Fernandez in order to justify their decision to suddenly promote him to the majors before the start of the regular season. But the Marlins were maybe expecting the 20-year-old to simply hold his own or not embarrass himself with a decent start in his major league debut against the New York Mets.

Jose Fernandez had other things in mind.

Fernandez was spectacular in his first start, and instead of looking like an outmatched 20-year-old starting pitcher, he looked the part of an ace-in-the-making already. Fernandez struck out eight batters in just five innings pitched, setting a Marlins record for most strikeouts in a rookie debut. He allowed just one walk and three hits to the Mets, and were it not for the timeliness of two of those baserunners coming back-to-back, Fernandez would have cruised to a shutout of the Mets before the Marlins' bullpen failed to hold the team's lead.

So Fernandez was quite impressive, but how impressive was his stuff when looked at on Pitch F/X? Let's once again use the database over at Brooks Baseball to find out.

What stands out immediately about this chart is the fantastic fastball. Fernandez averaged almost 96 mph on his fastball, and he threw them in 52 out of his 80 pitches. You get a feeling like Fernandez's usage of his fastball will remain at around 65 percent for much of the year, given the relative lack of development of his non-curveball secondary pitches, but that might not be a bad thing. His fastball has velocity and, as you can tell by the horizontal and vertical movement numbers, a lot of tailing action and sink. Unlike Nathan Eovaldi's relatively flat fastball with high "rise," Fernandez displays sink but can go up in the zone with ease when necessary and can have his fastball tail in and out against righties.

Ronit Shah shows off just one of those excellent fastballs in a series of GIFs on his post on Fernandez's debut.

Notice the late tailing run against the lefty batter Mike Baxter. Fernandez's fastball was moving like this for much of the game, tailing towards righties and away from lefties and fooling hitters. As a result of the strong movement and the extreme velocity, Fernandez induced seven swings and misses on his 52 fastballs, a swinging strike rate of 13.5 percent. That is a spectacular rate for any pitch, let alone a fastball.

We knew prior to the season that Fernandez had an explosive fastball. But we did not know that it was this consistently good. Fernandez threw 80 pitches and somehow stayed around 96 mph for most of the game. 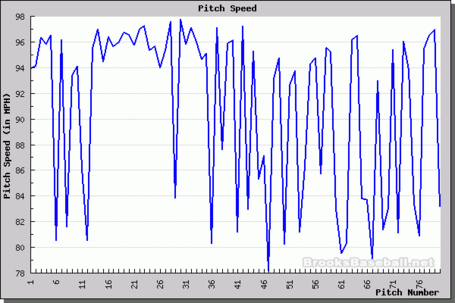 Fernandez did not struggle to maintain his velocity throughout the start, and that is a sign of a strong pitcher who does not struggle with stamina. With that kind of velocity and movement, his fastball is a terror to behold.

But equally as scary as Fernandez's fastball was his scary curveball. Brooks Baseballs's re-classifications had him throwing 23 curveballs on the game, and they were typically quite impressive. Fernandez threw it in 28.8 percent of his pitches yesterday, but that percentage increased up to 43 percent of the time with two strikes versus lefties and 53 percent versus righties in the same situation. Those numbers went up to 60 and 56 percent respectively with two strikes.

That data shows that Fernandez has a lot of confidence in the plus-plus offering as an out pitch, and it functioned well in that department. While he only recorded swings and misses with the pitch, Fernandez racked up strikes of the called variety with the deceptive pitch. In addition to those two whiffs, Fernandez threw seven called strikes versus only seven balls, meaning that he was able to pound the strike zone with his curve, and that goes double for when he threw it with two strikes. He recorded four of his eight strikeouts on his breaking pitch, and three of those four strikeouts were called out on pitches that simply froze batters.

The first pitch you see is a changeup, but the next offering is buckler that stops Ike Davis in his tracks and catches the outside corner expertly. It looks like it bends up at around the chest before finally reaching its destination at Davis's knees. The curveball showed significant horizontal and vertical movement, making it less of a 12-6 variety curve and more towards Josh Johnson's curveball from last season.

One of Fernandez's question marks was the lack of development on his changeup, which still requires work. But he displayed no concerns against lefties, as he shut down a mostly lefty-laden lineup in New York. He did turn to the changeup for occasional assistance, as he threw five of them during the game, all to lefties. He primarily leaned on his fastball and curve, and they did him well. He allowed only one hit to a lefty batter and struck out three of them.

Just watching Fernandez's debut, even against a relatively poor offensive team like the Mets, you get a sense that he is a true ace. Yesterday, he looked absolutely dominant and just one pitch away from being an elite pitcher. Fernandez's fastball is scary in terms of velocity, movement, and consistent effectiveness. His curveball was not on full display and still looked strong at confusing hitters into a standstill. Those two pitches could take him a long way in 2013, and they may be the basis for a strong career going forward. The questions of whether the kid is ready for the majors have been allayed, at least for now.