The Miami Marlins win their first game of the season, heralding a golden age of baseball for the franchise.

The Marlins did not just score one run, or two runs, but seven runs. This amounts to six-hundred percent more runs scored than in the entire series versus the Washington Nationals.

Second, the Marlins must bench Giancarlo Stanton. He struck out in the midst of the Marlins' five-run seventh inning, leaving the rest of the team to pick up the pieces. Later, Stanton undermined the Marlins in the ninth inning by hitting a double off LaTroy Hawkins, which forced Placido Polanco to be thrown out at home. 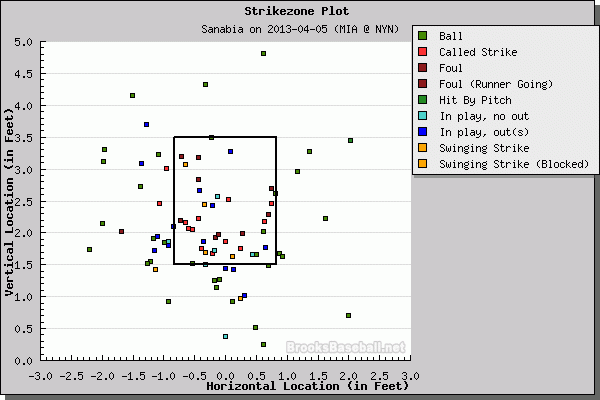 Making his first major league start since 2011, Alex Sanabia performed admirably Friday night. He doesn't posses amazing stuff, as evidenced by his average fastball velocity of 87.8 miles per hour during his outing. He didn't strikeout many batters and struggled with walks, although the strike-zone plots suggests the umpires didn't offer him many favors. Despite these shortcomings, Sanabia kept the Marlins competitive throughout the game.

Sanabia got into trouble early on in the bottom of the first inning. He allowed a single to right field off Jordany Valdespin, followed by a walk to Daniel Murphy. He then generated a timely double play grounder from Ike Davis, ending the inning. The bottom of the fourth inning began with a single to Marlon Byrd, and then a walk to Lucas Duda. Sanabia once again contained the damage, getting a fly out from John Buck, and then two ground outs from Ruben Tejada and Jeremy Hefner.

Groundballs backed up by quality infield defense were critical to helping Sanabia, and ensuring the Marlins victory.

As soon as Sanabia left the game, events took a turn for the worse. Newly acquired reliever Chad Qualls imploded in his sophomore appearance for the Marlins. He allowed to single to Mike Baxter, then walked Jordany Valdespin. Daniel Murphy then blasted a three-run homer to left field.

A.J. Ramos later came into the game in the eighth innings. He appeared fine at first, striking out Duda and forcing Buck to fly out. His command then evaporated seemingly out of nowhere. Ramos walked Tejada, then Mike Baxter, and finally hit Valdespin. He nearly walked Daniel Murphy, before getting a ground ball to Donovan Solano to end the innings.

Still not satisfied, the bullpen allowed more runs in the ninth inning. The Marlins brought in closer Steve Cishek, who struck out David Wright and walked Ike Davis. Kirk Nieuwenhuis then doubled off Cishek, scoring Davis. Lucas Duda added on another run with a ground-ball single up the middle. Cishek was able to prevent further harm, finishing off John Buck and Justin Turner to end the game.

The Marlins didn't play a clean game, but they won, and that's all that matters. I am ready for a twenty game win streak now.