The Miami Marlins took 19 innings to score their first run of the 2013 season, and at least the run came on an exciting play. Outfielder Justin Ruggiano delivered the first home run of the season for the Marlins. Watch it here!

The Miami Marlins took a long time to score their first run of the season. To be specific, the Fish lasted 19 innings, two games and change, before touching home plate and being declared safe. With Jordan Zimmermann on the mound for the Washington Nationals, there was a risk that streak would climb up to 27 innings and that the Marlins might be swept out of Washington without a run to their name.

Thankfully, Justin Ruggiano stopped all of that with a nice home run to the opposite field in the second inning. 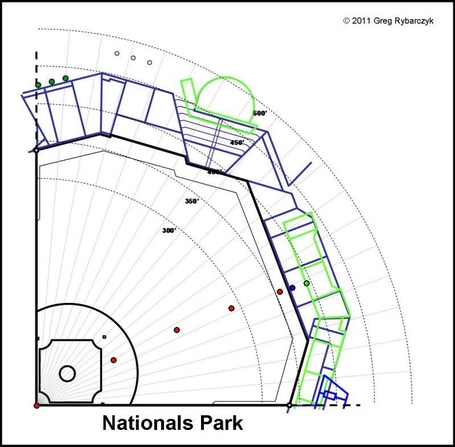 The home run did not appear, on the video, to go very far, but 393 feet is a respectable distance for a round-tripper. It was still a below-average home run in terms of distance for this young 2013 season, as the average true distance for this year's home runs is about 397 feet. Still, it was a well-struck ball that looked like it had a decent chance to get out, despite the melancholy call by Marlins play-by-play announcer Rich Waltz.

Ruggiano's home run is the first run of the Marlins' season, but at least it was an exciting one. He now has a double and a home run to his name in his first two games at the plate, further putting into question why he is platooning with Chris Coghlan at all. As questionable as the move may be, you have to suspect that, with another week's worth of games like this one, Ruggiano should snag the full-time center field job if manager Mike Redmond has any sensibility.

Miami Marlins vs. Washington Nationals: Marlins score a run, blown out by Nationals 6-1