The Miami Marlins finally scored their first run of the season off of a solo home run by Justin Ruggiano. Unfortunately, the rest of the team bobbled and stumbled through an ugly 6-1 loss to the Washington Nationals.

Attendance: 25,123
Hero of the Game: Technically no one, but in today's game, I'll give credit to Justin Ruggiano (0.045 WPA) for putting the first run on the board for the Fish. Credit also goes to anyone who guessed Donovan Solano (0.085 WPA), as he had the most WPA
Goat of the Game: Juan Pierre (-0.148 WPA)
Play of the Game: Ryan Zimmerman doubled in the first inning. Bryce Harper and Jayson Werth scored. (-0.173 WPA)

The Miami Marlins were unable to break out the broom breakers to bust up the sweep at the hands of the Washington Nationals. Unlike the first two games of the year that remained fairly competitive even towards the end, the Marlins looked like they were much further away from the victory in tonight's 6-1 loss.

The cause of the difficulties this time around was the pitching staff and defense. The Marlins' defense foreshadowed some problems last night in the eighth inning when it struggled to hold onto grounders or allow pitches to pass by, but today's defense accounted for two errors and an unearned run in addition to the pitching problems. While Wade LeBlanc was serviceable in defeat, the bullpen did not pitch well, and special merit goes to lefty reliever Mike Dunn, who struck out Harper but also allowed a walk, single, wild pitch, and a three-run home run in his two-thirds of an inning. 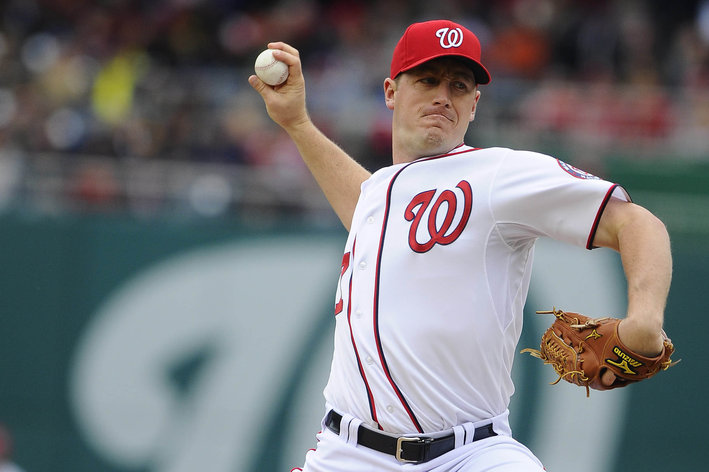 Nationals win, 6-1 final and they sweep the season-opening series with the Fish.

The Fish do have some cause to celebrate. After all, the team finally scored a run, its first of the 2013 season. The run came on a Justin Ruggiano home run. Ruggiano's home run went to the opposite field and just cleared the right-field fence to represent the team's only run of the year thus far.

The Marlins will face off against the New York Mets in a three-game series in Citi Field starting tomorrow night.

Miami Marlins vs. Washington Nationals: Marlins score a run, blown out by Nationals 6-1