The Miami Marlins might have lost 3-0 yesterday versus the Washington Nationals, but it was hard to fault Kevin Slowey, who put up a surprisingly good performance.

The Miami Marlins have to be disappointed in their offense for failing to score a run in the first two games of the season. But there is a silver lining or #minorvictory to be had in each of the first two Marlins games, and just like Ricky Nolasco had a surprisingly good performance, so too did yesterday night's starter, Kevin Slowey. Slowey was making his major league return, and it had to be considered a relative success.

This collection of data, thanks to Brooks Baseball and its Pitch F/X tool, shows some of Slowey's effectiveness on the mound last night. As expected, he threw nothing hard at the hitters, as his average fastball was clocked at 87.3 mph (includes his "sinker" classified here). He also depended on it very often, throwing it in 50 of his 85 pitches. This matches his track record of fastball use in the past, as BIS has him using the pitch around 65 percent of the time for his career.

Surprisingly, however, the fastball was actually quite effective. Slowey racked up called strikes with the pitch, throwing 14 called strikes versus just 17 balls. That yields a balls-to-called-strike ratio of 1.2, meaning Slowey had extreme control of the pitch.

Slowey also managed to induce 11 swings and misses in just 85 pitches, which comes out to a 12.9 percent swinging strike rate. Of those 11 swings and misses, five of them came from Slowey's fastball, meaning that he was blowing high-80's junk heat by hitters. The key to doing something like that? Location and sequencing. 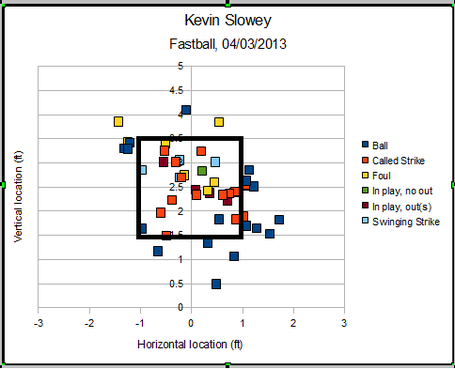 Take a look at where the swinging strikes occurred. A few are slightly obscured by other pitches, but you will note that the majority of his fastball whiffs were high and in the strike zone. Typically, swings and misses on fastballs occur high in the strike zone, so that matches up with the results we see here. But with Slowey's junkball style, one would figure that throwing fastballs that meaty and chest high may be asking for trouble. Only one of the whiffs occurred near the edges of the zone, where these high pitches are likely to be more effective. One was almost dead center and was probably lucky to be whiffed on at all.

Part of the success of the fastball has to be the sequencing of the pitch, so some credit should go to Slowey for using the fastball at the right time when needed. But if we were to repeat his locations for this game, I would imagine Slowey would want to nibble near the edge of the zone a little more to avoid getting hit hard.

For as good as his fastball was (and there are questions as to whether it is repeatably good), his breaking pitches were his undoing last night. Slowey primarily used a curveball as change-of-pace in last night's game, but the curve yielded mixed results. Three swinging strikes out of 14 total swings is at least a passable rate for a go-to out pitch, but the problem was when the batters did not offer at the curve. When hitters did not swing, the pitch went for nine balls versus just one called strike. Typically, curveballs serve to get both called strikes and whiffs, since hitters can swing over the pitch and also watch it dip into the strike zone. Slowey only had one of those things working, and even then the pitch's whiff rate (swings and misses per swing taken) of 21 percent was not that impressive.

In addition, the curve was the pitch that ended up delivering the sole run for the Nationals against Slowey, the solo home run by pitcher Gio Gonzalez. That curveball was hung really high up in the zone and was one of only two hits allowed on the pitch. 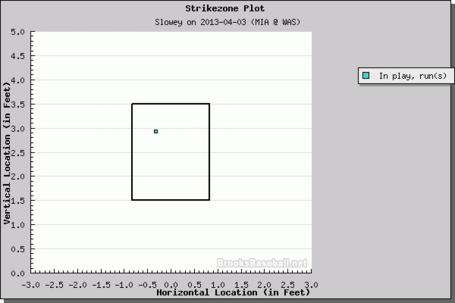 The hope for Slowey going forward is that he can continue using his fastball at this level of effectiveness, but his location works a bit high for a player throwing in the mid- to high-80s. The problem arises when hitters recognize when the fastball is coming and can turn on the pitch. To avoid this, it may be better if Slowey worked more towards the edges without necessarily taking away the whiff possibility by working lower in the zone. For his breaking pitches, he simply needs to generate more strikes and place his curveball in better locations to do so. Despite the complaints, it is hard to get too down on his performance from last night, and while there are areas of improvement, the Fish have to be happy to see this kind of strike-throwing efficiency from a pitcher, even if it was with just one pitch.