The Miami Marlins walk-off to a victory for the second straight time against the New York Mets, as Kevin Slowey leads the way with a spectacular performance on the mound.

The Miami Marlins were once again embroiled in a tight battle with the New York Mets, as the two starting pitchers, Kevin Slowey and Jeremy Hefner, dueled for supremacy in this game. For most of this run-less pitching affair, Hefner had the better of Slowey. But for the second time in a row, the Marlins took their final opportunity to do their most offensive damage.

Slowey and Hefner were evenly matched for most of the game, but it was Hefner who held the lead and went into the ninth inning with a chance at a complete game victory. The Mets had scored in the fifth inning, as Slowey allowed a leadoff double to Daniel Murphy, followed by Murphy advancing all the way to home on two separate fly ball outs. But outside of that run, it was an even game. Both pitchers ended up allowing just four hits. Both pitchers struck out eight batters and walked none in their impressive outings.

Slowey's eight strikeouts came on a surprising 10 swinging strikes. What is more impressive, however, was that Slowey dominated the strike zone by staying consistently in an area. 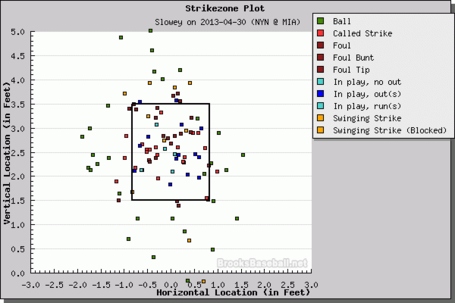 The balls that sailed far out of the zone make this chart look much worse than it actually was. The truth is that he was in the zone far more often than he was out of it. Slowey threw 33 balls versus 24 called strikes, getting an impressive balls-to-called-strike ratio of 1.4. That slew of pitches in the middle and upper part of the zone was doing a decent job of racking up strikes, and it can only help that the Marlins' defense performed well behind him to allow only four hits in 19 balls in play. Still, with Slowey inducing swings and misses along with his usual strike-pounding self, it is not surprising yet still exciting to see him toss eight strikeouts.

The problem was that the Marlins were not producing anything on offense to back up Slowey, but the team delivered in the ninth inning. Hefner allowed just four hits and two of those were erased by immediate double plays. But the last single allowed to pinch hitter Chris Coghlan was the one that hurt Hefner the most. Coghlan got to second base on a passed ball and allowed a mistake on a sacrifice bunt by Juan Pierre to put runners on first and third with no one out.

Memories of last night's 15th inning crept up again, and the Marlins delivered on the goods. Donovan Solano singled to drive in Coghlan. Placido Polanco. who was 0-for-3 on the evening, was then intentionally walked. The bases were loaded, but a ball in play did not end up determining the game. Reliever Brandon Lyon threw a wild pitch, and that was enough to bring the speedy Pierre home from third, sealing the Marlins' victory.

This was the third straight win for the Miami Marlins. The Fish will have an early afternoon and an opportunity to sweep the New York Mets tomorrow.