Giancarlo Stanton injury: How does this affect the 2013 Miami Marlins?

Giancarlo Stanton's injury will keep him out for at least three weeks and possibly more than a month. How will the Marlins' offense recover from this latest blow?

Share All sharing options for: Giancarlo Stanton injury: How does this affect the 2013 Miami Marlins?

The Miami Marlins have to be devastated by Giancarlo Stanton's latest injury from last night. Stanton's right hamstring strain should keep him out of commission for at least three weeks, and if his injury is as severe as first baseman Casey Kotchman's, it could hold him out for more than month. This injury may eclipse the difficult one-month absence the 2012 Marlins had to endure when Stanton got knee surgery to remove loose bodies in his right knee.

When Stanton was injured at that time, the Marlins had just acquired Carlos Lee in the hopes that they could turn around a disastrous month of June and make it into a Wild Card run. While the hopes of that happening were relatively low, the Fish still found the win impact of losing a player like Stanton was important. Last season, Stanton's one-month absence was expected to cost the Fish about one win.

This injury may keep Stanton out longer than one month, but the situations have changed drastically. Last season, the Marlins were replacing Stanton with Justin Ruggiano, with the occasional awful cameo of Greg Dobbs in right field while the Fish waited for Emilio Bonifacio's return from injury. This season, Bonifacio is long gone, Dobbs is needed to play first base after Joe Mahoney also revisited the disabled list with his own hamstring injury, and Ruggiano is starting the majority of games in center field. The 2013 Marlins' backup options in right field are fewer and less effective. 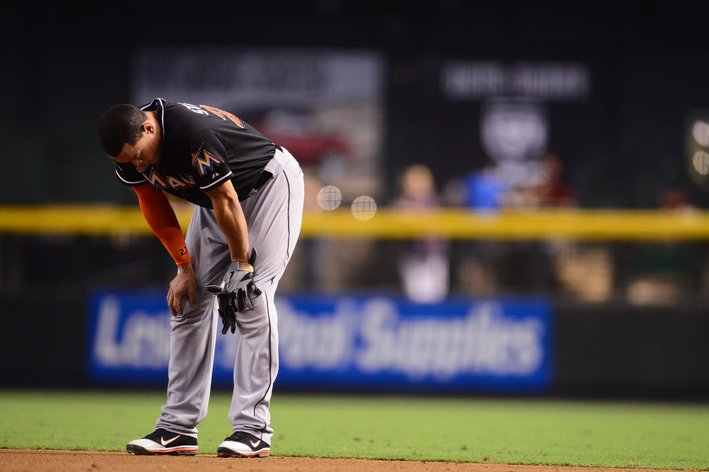 The Miami Marlins and Giancarlo Stanton are facing major setbacks thanks to Stanton's latest right hamstring injury. What can we expect from Stanton's recovery?

On the plus side, the importance of the wins the Marlins will be losing have almost no impact. The Fish are 7-19 heading into the final game of April; there is nothing important to play for in 2013, as expected. If the Fish lose Stanton for a month and a half, they would be expected to lose 1.3 wins versus a typical replacement-level player, according to ZiPS projections. Think of one month of losing Stanton as equivalent of losing a year of, say, Rob Brantly's performance. The projection system expected Stanton to hit .281/.365/.580 (.400 wOBA) going forward, which does not sound unreasonable even in the face of an entire month of struggles from Stanton.

Who will replace Stanton in the Marlins' lineup? The current candidates are recently promoted prospect Marcell Ozuna and longtime project and former 2009 Rookie of the Year Chris Coghlan. Neither player is good as of right now. The story on Coghlan has been written for years now; he had two amazing months late in 2009 and since then has never duplicated his results while the team shifted him around to multiple positions in a matter of three seasons. Ozuna is a powerful right-handed hitter and top Marlins prospect, but he is also a raw talent from Double-A. Here's prospect maven Eric Weston discussing Ozuna's talents from earlier this morning.

Fish Stripes ranked Ozuna as the fifth best prospect in the farm system this off-season, praising his tremendous power, but also noting his weakness at pitch recognition. Ozuna has trouble identifying pitches outside the strike-zone, which major league pitchers will undoubtedly exploit. He has reduced his strikeout rate over the last three seasons, but still struck out in 21.5 percent of plate appearances last year.

The downward strikeout trend is encouraging, and the fact that he has power is going to be needed to help replace Stanton lost production, but is Ozuna ready for the jump after just 43 plate appearances in Double-A? Highly unlikely.

Here is how PECOTA sees the two players stacking up in terms of their projections.

It should be noted that PECOTA is the only system that sees Coghlan as even remotely close to league average, so I would be inclined to drop that projection down further. Still, it is likely that Coghlan is a better hitter than Ozuna right now, even with all of his recent struggles. Ozuna's plate approach is still raw despite recent improvement, and it is very likely he may struggle to hit major league breaking balls at this stage. His advantage over Coghlan, however, remains on defense, where he has a cannon arm and is a natural outfielder.

Let us assume, for the time being, that Coghlan is the better player and will get a heftier share of the playing time as part of a platoon setup. ZiPS projects Coghlan to be a replacement-level player or worse in 2013, so the Marlins are expected to lose almost 1.5 wins in Stanton's missed time.

What about Ozuna's development? If the Marlins do not play him full time or, worse yet, leave him on the bench for the entire time Stanton is away, the Fish will have likely stunted some of his development. Ozuna was destroying Double-A pitching to start the season, so it would probably be best for the Marlins to keep him playing, even if it is against superior major league talent. Letting him rot on the bench in favor of Coghlan is more important to avoid than losing the fractions of a win in talent between Ozuna and Coghlan right now. On the flip side, there is always concern that facing too high a caliber of pitching for a young prospect like the 22-year-old Ozuna may hinder his development as well.

The Fish are in a catch-22 situation with the promotion of Ozuna. They need to play him to help him continue to grow, but facing major league pitching may hurt his development as well. Their alternative is Coghlan, who has looked like a lost cause for the last two years. Either choice is a negative, and both will easily cost the Marlins wins versus Stanton. This latest Stanton injury will have some far-reaching consequences in the development of the Marlins' players.