The Miami Marlins and Giancarlo Stanton are facing major setbacks thanks to Stanton's latest right hamstring injury. What can we expect from Stanton's recovery?

The Miami Marlins would have loved to celebrate last night's victory over the New York Mets in grand fashion, but the team received another bit of terrible news during and immediately after the game. Star outfielder Giancarlo Stanton was injured running out a ground ball, and the Marlins placed him on the disabled list with a right hamstring strain.

The timing for this problem could not get any worse for both Stanton and the Fish. Just yesterday, we were discussing Stanton's exciting weekend against the Chicago Cubs and how he was turning around his offensive season, but now that comeback trail has been cut relatively short. Stanton had hit three home runs over the weekend and all throughout the week, he had been looking better at the plate in terms of plate recognition. Now, as Stanton and the Marlins head into the month of May, a month in which Stanton has hit .307/.383/.689 in 243 plate appearances, the club will be without its best hitter while that hitter sits back and heals from yet another injury.

Stanton's injury history is becoming more and more checkered. In each of two spring trainings before the 2013 one, Stanton missed about half of spring training with nagging injuries, and subsequently he came out cold to start the season in each of those years. Last year, he sat out a total of 41 days, including 30 days following a surgery to remove foreign bodies in his right knee. Now this season he has missed time with two separate injuries; earlier in the year, he missed about a week's worth of games with a sore left shoulder thanks to a diving play on a ball, and now he suffers another injury on a non-contact situation. 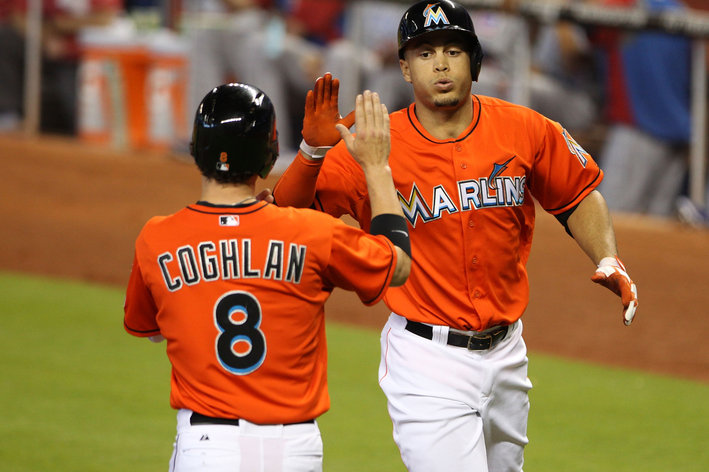 Giancarlo Stanton's injury will keep him out for at least three weeks and possibly more than a month. How will the Marlins' offense recover from this latest blow? How will Chris Coghlan and Marcell Ozuna fare in replacing Stanton?

The good news for the Marlins is that Stanton has no prior history of hamstring problems, so this may not become a recurrent concern. Stanton's primary issues have come from his knees, but he has never pulled or strained a hamstring before. Healing from a hamstring injury requires the typical "RICE" treatment: rest, ice, compression, and elevation within the first few days of the injury. Unless the injury was a severe tear of the muscles of the hamstring group, it is unlikely that Stanton will need any more treatment than that. Stanton was in obvious pain after the play, but there is no way you can decipher the severity of damage with just the initial reaction.

Stanton is scheduled for an MRI done today to determine the grading of the tear. If we are looking at a grade 1 or 2 tear, then the Marlins should expect Stanton to be out between three to six weeks. However, a severe grade 3 tear would require surgery to repair the heavily torn muscle and would shelve Stanton for three months.

The Marlins do not have to look very far to see what the recovery of a hamstring injury may be. First baseman Casey Kotchman suffered a very similar injury at the beginning of the season. in which he was running out a ground ball to the pitcher as well. You can watch the two videos to compare. Stanton's video can be seen here. You can check out a GIF of the injury as well:

Now compare it to Kotchman's injury.

Kotchman looks like he suffers his injury prior to hitting the bag, while Stanton gets hurt on the bag itself. Both of them, however, crumple to the ground in a similar fashion.

Kotchman is still recovering from the injury on April 4, so this would be his fourth week on the disabled list with the injury. The hope is that Stanton can recover earlier than that, but it is possible that the injuries are similar enough to expect Stanton to sit out a month or more. The latest as of April 25 was that Kotchman was still "a few weeks away" from returning.

This hamstring injury could keep Stanton out longer than his surgery on his knee did last season. It stopped his slow comeback from an ugly start and instead has contributed to making 2013 so far a very forgettable and miserable season for Stanton.