Other Miami Marlins players being attacked in the strike zone

Pitchers may be avoiding Giancarlo Stanton, but they are not being shy about attacking the rest of the Marlins' lineup. Almost all other Marlins starters are seeing more than the average number of pitches in the strike zone.

Share All sharing options for: Other Miami Marlins players being attacked in the strike zone

Dave Cameron of FanGraphs published an article last week on the percentage of pitches in the strike zone by batting order position. It was a very interesting read that gave some fascinating insight on how pitchers approach hitters based on their position in the lineup. It was meant to point out that Giancarlo Stanton is getting very few pitches to hit not because he is lacking in protection, but rather because he is a dangerous hitter. In the research, it showed that hitters batting third in the lineup saw the second-fewest strikes in the National League, behind only leadoff hitters. Combine that with the fact that Stanton is not your average third hitter, but probably among the best in baseball, and you can see why pitchers have thrown just 39 percent of pitches in the strike zone against him.

But this brought up my curiosity about the rest of the Marlins roster. The Fish are boasting one of the weakest lineups in baseball around Stanton, and while I feel as though this has had an effect on Stanton's pitches seen, it is also interesting to see just how the other Marlins are being pitched to. How are pitchers attacking other Marlins hitters?

A cursory glance at the Pitch F/X plate discipline leaderboard for the Fish can give you that answer.

One common thread is apparent when looking at the attack pattern of pitchers versus the rest of the Marlins lineup: challenge them in the strike zone. Of the nine players besides Stanton in the top ten in terms of plate appearances for the team, only one saw fewer than 50 percent of his pitches in the strike zone. The remaining players are seeing tons of pitches in the zone, and this is especially true for the two veteran free agent pickups from the offseason, Placido Polanco and Juan Pierre. These two players, along with Rob Brantly, all rank in the top 15 in zone percentage in all of baseball among players with at least 60 plate appearances. 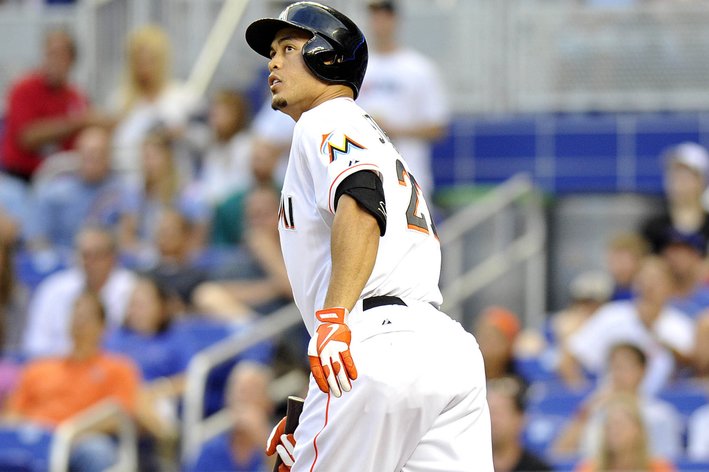 Miami Marlins fans were all fretting about whether Giancarlo Stanton would bounce back after another slow start to the season. It's only a few games, but it looks as though he is making us feel silly for doubting him at all.

All of these players are being thrown at for the same basic reason: pitchers are not afraid of the results. Only one of those players, Justin Ruggiano, has a projection that is at or better than league average. The remaining players are expected to be chumps in the lineup, and that means the opposing pitchers do not need to risk walking them by throwing cutesy outside pitches.

For the majority of the Marlins' hitters, the reason why the consequences are not feared is because of a lack of power. Pierre, Polanco, Solano, Greg Dobbs, Adeiny Hechavarria, and Chris Valaika are all well-known for lacking power. Rob Brantly may also provide a similar case, though without the obvious track record. That lack of power diminishes the maximum return for a base hit or contacted ball. Pitchers are less likely to fear throwing in the zone if the worst outcome is a home run, but they are far more likely to do so when a single is the most dangerous punishment. That is why, despite very high contact rates for each of these hitters (all above 90 percent in the strike zone), pitchers are still pounding the zone and betting that a contacted ball will not amount to much.

For Justin Ruggiano, attacking him in the zone is a completely different tale. He is the most aggressive Marlins hitter, but he is also one of the most prone to the strikeout. Ruggiano swung at 74 percent of pitches in the zone but made contact on just 78 percent of those swings. Those extra whiffs yield extra strikes and thus more positive events for pitchers. The reasoning behind attacking Ruggiano is not that he is no danger to launch one out (he is tied with Stanton for the team lead with three home runs), but rather that he is less likely to even make contact compared to the other players.

What has been the result of that for the Marlins? Well, the Fish are in the top ten in terms of avoiding strikeouts, but they are also tied for fourth to last in walk rate despite Stanton's 14.5 percent walk rate so far this year. Pitchers are not getting strikeouts by attacking the zone, but at least they are not yielding walks. As for contacted balls, the Marlins are tied for second to last in terms of batting average on balls in play (BABIP), meaning they are not scrounging up hits despite their contact. They are also last in home runs, isolated power (ISO), and slugging percentage on contact (SLGCON). The Fish are behind the second-to-last Los Angeles Dodgers in ISO and SLGCON by the same amount as the Dodgers are behind the 20th-placed teams in the respective categories.

Opposing pitchers have gambled on the Marlins' inability to do anything with pitches in the zone thus far, and they have won more often than not. The rest of the Marlins lineup aside from Stanton has done nothing to scare off teams from continuing to attack the Fish in the zone, so expect this pattern to continue until someone like Ruggiano or Brantly begins making better contact.