Miami Marlins fans were all fretting about whether Giancarlo Stanton would bounce back after another slow start to the season. It's only a few games, but it looks as though he is making us feel silly for doubting him at all.

Entering the weekend, Andrew Townes of Fish Stripes was wondering if Giancarlo Stanton was just a slow starter. Conor Dorney last week discussed how Stanton's struggles were hurting the Marlins' poor offense. We were all concerned about whether Stanton may still be injured or hobbled, or whether he was regressing to a lower-than-expected mean right in front of our eyes.

And then Stanton hit his first home run. And then he hit two more home runs. And all was right with the world again.

In one impressive weekend, Stanton muscled up three home runs along with four hits total to give a sudden boost of performance to his anemic batting line. Before the Saturday and Sunday games, Stanton was hitting just .203/.320/.250 for the year. After the powerful weekend, he brought that line up to .243/.361/.414, good for a .343 wOBA. Just three homers and an impressive overall weekend turned Stanton's batting line from "league-worst" to "equal to his rookie season."

As Andrew mentioned before, Stanton may just be a notoriously slow starter. Last season, he was injured during spring training, and most fans assumed that was the reason for his poor season start. Through April 28, Stanton was hitting a slightly better .246/.290/.308 line last season, and he had yet to hit a home run. I was concerned that Stanton was getting attacked in the strike zone and was unable to handle the new approach. It turned out it only took those first 19 games to handle it, as he hit a home run on game number 20 and took off; in his next 19 games, he hit .311/.386/.703 with eight home runs in 83 plate appearances.

Stanton awoke from his slumber two games earlier this year, as his first home run came on April 27 as opposed to April 29. But last year's problems and this year's issues were completely different. Stanton was not accustomed to being pitched to so aggressively, as pitchers were banking on him to fail to make contact on pitches in the zone. They were challenging him, and as a result he posted a 24.7 percent strikeout rate versus just a 5.7 percent walk rate through April 28.

This season, the way pitchers have thrown to him is completely the opposite: they are staying as far away from him as possible. Witness from a previous article on Stanton's struggles with the strike zone:

Pitchers are staying away from him by throwing out of the zone as much as possible, to an extent that no hitter in the last three years has ever seen. Because the Marlins hitting around Stanton are so weak, teams are not risking too many pitches in the strike zone, and because Stanton is susceptible to the strikeout, he has been offering at more pitches than necessary out of the zone.

That initial table was made a week and a half into the regular season. How has Stanton adjusted since then?

Pitchers are still throwing away from him, but he is adjusting in a major way. Compare those numbers from a few weeks ago to now. Stanton has recognized that he needs to be more patient and discerning at the plate, and this has led to a decreased overall swing rate and a return of his swing rate of pitchers out of the zone back to career norms. Presumably, this means that he is offering at fewer pitches that are way out of the zone, thus limiting his whiffs on those pitches. His contact rate on pitches out of the zone went up as well thanks to that regression, and it is now approaching his career norms. 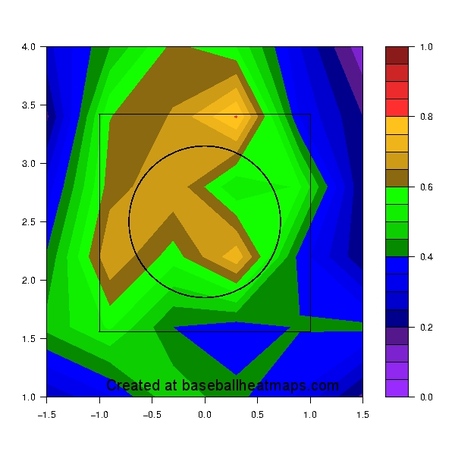 Look at the relatively high frequency of pitches swung at up in the zone. This is a regressed version, but the reality was that Stanton was falling for the high fastball at an extreme amount to start the year, likely because he was getting behind in counts. He also tended to avoid the low strikes almost entirely to begin the year. 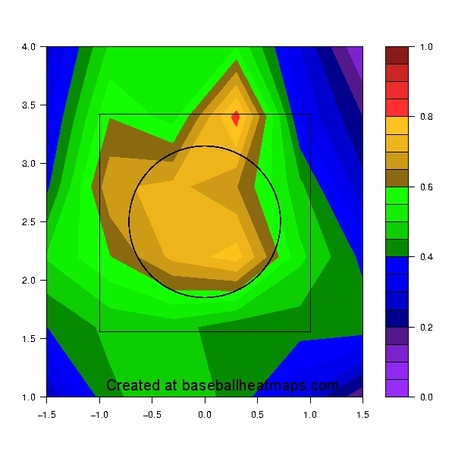 He is still chasing high fastballs, but the frequency of his swings high in the zone has diminished significantly. In addition, there is a lot more yellow towards the center of the strike zone, indicating that Stanton is swinging more often at the pitches that he can actually crush. Whereas before he was caught chasing too often, he is now learning to hold off and wait to jump on his pitch.

Even before the three-homer outburst, it is likely that Stanton was making the adjustments to bring his game back to normal. All throughout the week, we saw him hitting sharp singles or line drives or long flies that were caught, and they all seemed like signs that he was getting back on track. This weekend was the results-based representation of his return, but Stanton was already working on getting back on track for at least a week. In any case, it does seem as though Stanton is ready to be the All-Star player at the plate that he has been for the last few years, so Marlins fans may get a chance to enjoy his plate appearances once again.