The Miami Marlins fell short once again against the Chicago Cubs, despite Giancarlo Stanton's first home run of the 2013 season.

Miami Marlins starter Alex Sanabia may have put up his most complete performance to date. The Chicago Cubs suffered from the same issues against Sanabia that other teams have thus far, specifically that he induces a surprising whiff count. Sanabia once again had his stuff dancing versus the Cubbies, as he induced 13 swings and misses in 93 pitches. That yields a 14 percent swinging strike rate that is supremely impressive and should be indicative of a player getting seven or eight strikeouts. To his credit, Sanabia's four strikeouts was tied for his best mark of the season, so he did get some outs on that.

What made this start much better was the lack of walks. Sanabia only walked two batters the whole game. One would think that would indicate that Sanabia has somehow found himself some control. But a cursory glance at his location chart does not agree with that assessment. 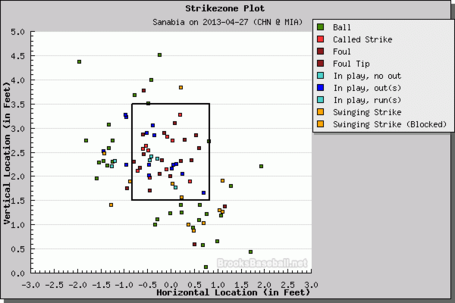 Sanabia threw 32 balls versus an absurd 10 called strikes. Out of all of his pitches, only ten were caled for strikes, and you can see that his locations are still all over the place. It seems he still has to determine just how he will optimize his rate of swings and misses on pitches that are moving out of the zone versus how many pitches he will locate out of the zone. Tonight it worked out, but how much more can he keep up the lack of strikes?

Marlins Fail with Runners On

The Marlins did not have that many baserunners in today's game, as the team could only muster five hits and three walks. But in the few chances the Fish did have to bring runners home, they proved once again incapable of finding that final, necessary hit. In the seventh and eighth innings, the Marlins used their baserunners well enough to advance them up to and past second base, but neither of those instances resulted in a game-tying run.

The first shot in the bottom of the seventh looked like an ideal situation. Justin Ruggiano and Joe Mahoney reached base on a walk and a single respectively and had the Marlins with two runners and no outs. Miguel Olivo then hit into a devastating double play that was almost the worst play of the game (-0.214 WPA for the Fish), and the threat ended shortly thereafter.

In the eighth inning, the Marlins got Juan Pierre on board with a pinch-hit infield single. Pierre then advanced to scoring position on a wild pitch with two outs and Carlos Marmol pitching. After Giancarlo Stanton was walked, the Marlins once again failed to capitalize, this time thanks to an excellent defensive play by Starlin Castro that just beat out the Stanton slide to second base.

Oh yeah, and this happened too. Go and read about it.