Oh no, Marlins owner Jeffrey Loria tinkered with the team! In other news, the sky is blue and I am tired of Jeffrey Loria stories.

Remember the innocuous switch in pitching order between Ricky Nolasco and Jose Fernandez in the Miami Marlins' Tuesday doubleheader versus the Minnesota Twins? I didn't either, but Yahoo! Sports's Jeff Passan and his "sources with knowledge of the situation" certainly did. According to the report, Loria insisted on the pitching order change because of temperature differences (H/T MLB Daily Dish).

Loria insisted Fernandez, the team's prized 20-year-old rookie, pitch in the first half of the doubleheader at frigid Target Field instead of the scheduled Nolasco because the day game was expected to be warmer. The temperature at Fernandez's first pitch (38 degrees) was actually colder than at the beginning of Nolasco's start (42 degrees).

Rookie manager Mike Redmond delivered the news to Nolasco about 2½ hours before the first game against the Minnesota Twins, and it did not go over well with him or his teammates. Standard protocol for doubleheaders is that veterans choose which game they want to pitch. Not only did Loria ignore that and further alienate Nolasco, the Marlins' highest-paid player who has previously requested a trade, he sabotaged Redmond less than 20 games into his managerial career.

There are two aspects about this move. One is the move itself, and if you thought it was benign, you were probably right. I recall hearing, during the second broadcast, that it was odd that Nolasco was shifted to the nighttime game because of the tradition of the veteran in the doubleheader. Indeed, it sounds as though Nolasco was upset about the change. I don't understand the ceremony behind this tradition, but I suppose if it was always done and it was not done this time, it would certainly be upsetting to the players. If that is the case, then Loria certainly overstepped his bounds, especially since the difference is so minimal that it does not even bear mentioning. 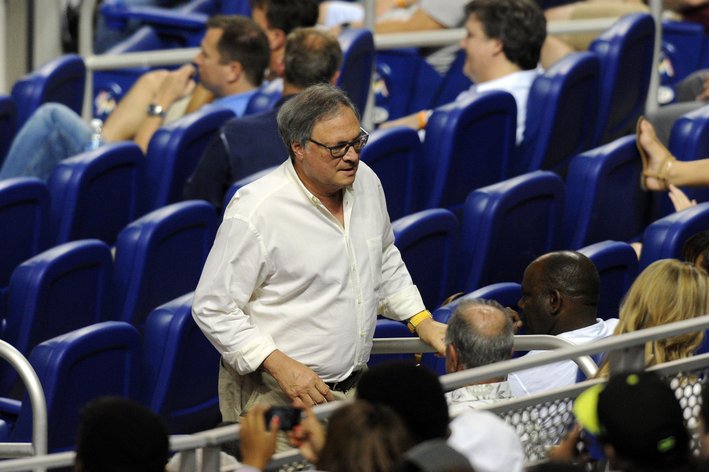 Few will argue that Jeffery Loria is a good sports owner. Many would argue he is the worst, but what really makes him what he is is his utter lack of patience.

But that last sentence also applies to the second aspect of the move: the over-the-top response. Redmond may have been embarrassed, and Nolasco may have been upset, but this move was otherwise harmless. In addition, if everyone knows it comes from the organization rather than the manager, then you can imagine the players understanding the position the manager is in. Even if it isn't, all it does is upset the one pitcher on the roster who is least likely to be around for the long haul. Other players could get upset, I suppose, but they have to know that any suspicious moves made by Redmond may have some connection to the pudgy man upstairs who signs everyone's paychecks.

Was the move a difficult or frustrating one for Redmond and Nolasco? Sure. But did it really provide the sort of catastrophic problem for Redmond that Passan presents here?

By overstepping boundaries no other owner in baseball would dare, Loria presented Redmond with a Catch-22: listen to the man who signs his paycheck and risk drawing the players' ire, or refuse to kowtow to Loria's requests and find himself at the mercy of the owner's short fuse.

I think there is a limit to what something this small and relatively insignificant can cause. Redmond may have upset the players, but if the players got upset every time something this small happened, then mutinies would be happening across the league. Maybe Loria is the only owner who tinkers with lineups, but if Redmond has any caliber as a manager, he can probably handle a minute crisis like this one.

In the end, I fall even further down the spectrum of indifference than SB Nation's Marc Normandin does on this topic. Normandin finds the latest Loria problem boring.

This should probably generate outrage, but it's pretty tame and boring by Loria standards. Dude fleeced an entire city out of hundreds of millions of dollars with a stadium deal just in the last couple of years -- look how many Marlins' stadium stories poor Neil deMause has to write -- and no matter how much you love baseball, that ranks just slightly above "wanted Jose Fernandez to pitch at a time different than the scheduled one."

I'm beyond bored. I just don't care. Jeffrey Loria is as he always is. Not everything he does that is wrong is a crisis that needs to be lambasted, nor does everything he does need to be microanalyzed for errors. He is neither a manipulative, maniacal fiend nor a micromanager. He may very well be just a bumbling owner with no patience. This is just another example of him not understanding how his meddling can affect the team, but in this case, it barely affected the team, so why are we making it sound like a big deal?

Because it's Jeffrey Loria, and arrrrrrrrgh!